A man has been arrested at a Victorian border checkpoint with New South Wales after allegedly providing false information to police and then punching an officer in the face.

The man and two women in their 20s drove to the checkpoint on Saturday morning seeking to cross into NSW at Corowa when they were pulled over by police and defence personnel.

Police say the two women presented valid permits and identification but the man, sitting in the back seat, did not follow suit.

Subsequent checks found the man was wanted on seven outstanding warrants including one revoking his parole.

The 21-year-old man then allegedly attempted to flee the vehicle and punched a senior constable in the face, causing bruises.

He then attempted to flee the scene.

He was arrested by other officers and defence personnel and taken to Corowa Hospital due to suspected drug ingestion, with authorities seizing drug paraphernalia from the car.

The man remains in hospital and is yet to be charged. 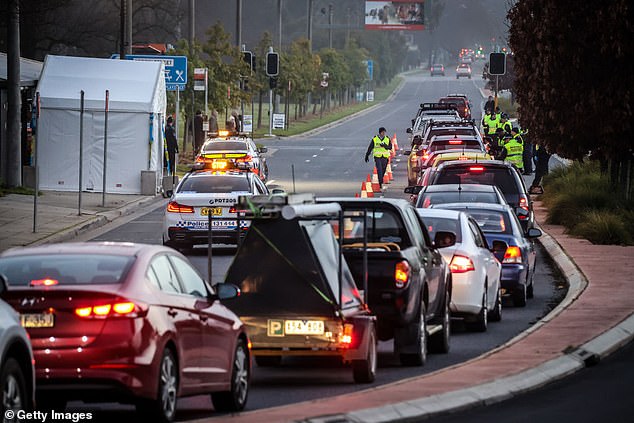 After allegedly punching an officer in the face the man attempted to get away but was quickly arrested by other officers (pictured, a border crossing at Albury, NSW)