A man is set to go on trial for murdering his wife after his son discovered the remains of his mother buried about six inches underneath a concrete slab in the backyard in 2014, two decades after he implicated his own father in her death.

Aaron Fraser was three years old when his mother Bonnie Haim disappeared. At the time, he tried to tell police that his ‘daddy hurt her’, but no one believed him and no physical evidence tied his father Michael Haim to the crime, according to the Florida Times-Union.

Even his mother’s family members did not believe him at the time. ‘The credibility of a child is something that you have to judge in perspective,’ Robert Pasciuto, Bonnie’s father said in an 2010 episode of the true crime television series Unsolved Mysteries.

Michael Haim was initially called a suspect in the case, but he was never charged. At the time, Fraser (sitting in his mother’s lap), now 29, was adopted by another family and Bonnie’s disappearance remained unsolved 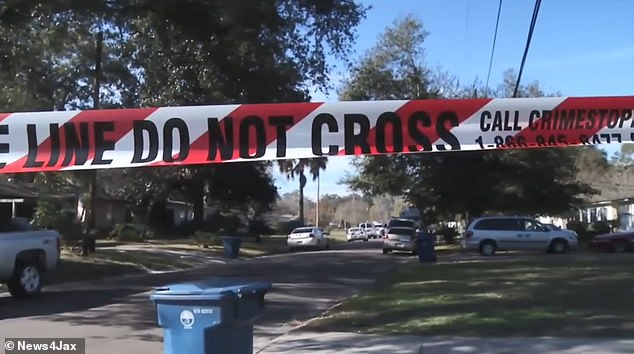 The jury selection in the murder trail begins on Monday in Florida. Michael Haim has maintained that he was not involved with his wife’s death. Pictured is the crime scene 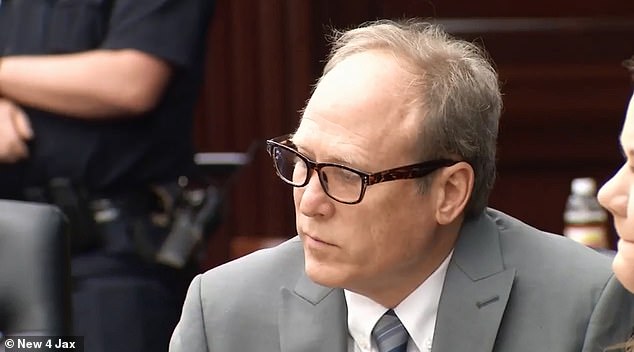 Michael Haim, 52, in court on Monday for the jury selection in his trial

‘He’s said a couple of things that we know were not true. ‘Mom’s car is in the lake.’ We know her car wasn’t there. No one has asked Aaron why did you say mom’s car is at the bottom of the lake,’ Pasciuto added.

‘Aaron also stated that “Daddy shot Mommy,” “Daddy placed Mommy in timeout,” and “My daddy could not wake her up,”‘ a 2015 arrest affidavit said.0

A spent shell casing found where Bonnie Haim was buried was the same type of caliber as a rifle that Haim owned, the affidavit said.

Aaron, now 29, was adopted to another family and changed his last name to Fraser. Bonnie’s disappearance remained unsolved. 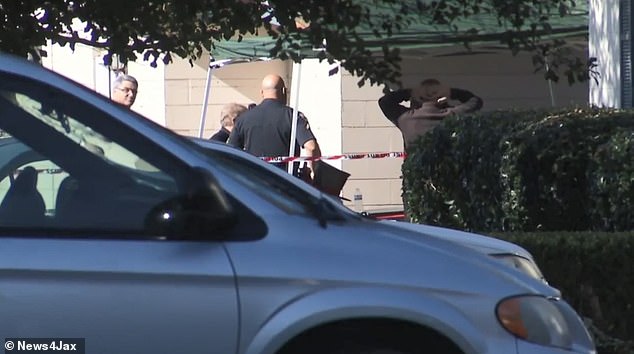 The trial will begin at 9am on Tuesday, according to Bonnie’s family who set up a Facebook page in her memory. Officers seen at the crime scene in 1993 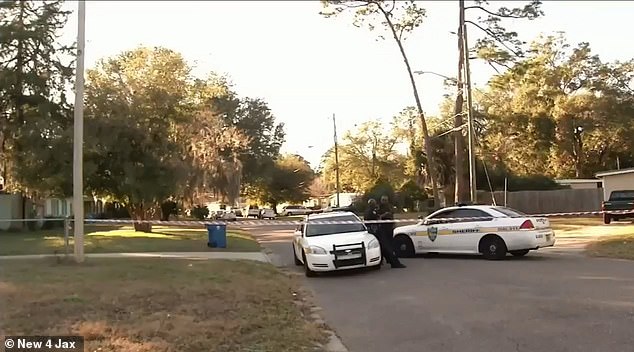 Years later, he and his mother who adopted him won the deed to the childhood North Jacksonville home in a wrongful death lawsuit filed against his birth father.

On December 14, 2014, Fraser begun working with his brother-in-law to demolish the swimming pool in the home’s backyard and they made the grisly discovery. 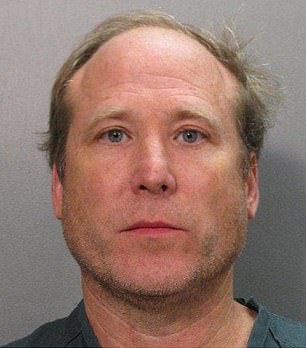 The jury selection was completed Monday for Michael Haim (pictured) who is accused of murdering his wife, Bonnie Haim, in 1993

The excavator they were using cracked a slab of concrete, and Fraser attempted to break it up further with a sledgehammer breaking a water pipe.

As Fraser and his brother-in-law looked for the pipe in the dirt when they came across plastic sheeting or a bag. Fraser broke it open with his shovel.

Fraser told News 4 Jax that he reached inside the bag and initially thought his mother’s skull was a ‘coconut’.

‘It looked like a coconut shell. I had it in my hand. We looked back in the hole and seen teeth,’ Fraser told police.

‘At that point in time, you could actually see the top of the eye socket. And it was like this part of the head, the top half of the head. I set it back in the hole,’ Fraser said.

Bonnie disappeared in January 1993. Her purse was found in a hotel trash bin, and her car was abandoned near the Jacksonville International Airport in Florida.

According to the arrest affidavit, Haim was abusive to his wife and she had made plans to move into an apartment with their son while he was away on a trip.

She had secretly opened a bank account and when Haim found out about it and made her close it, she started giving money to a trusted friend to hold for her. 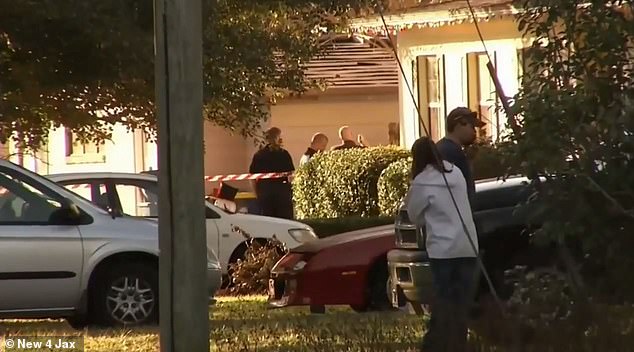 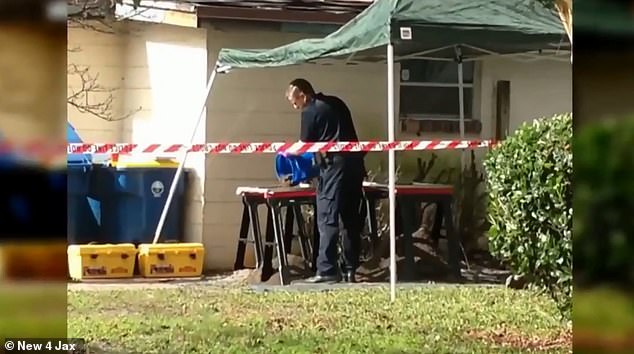 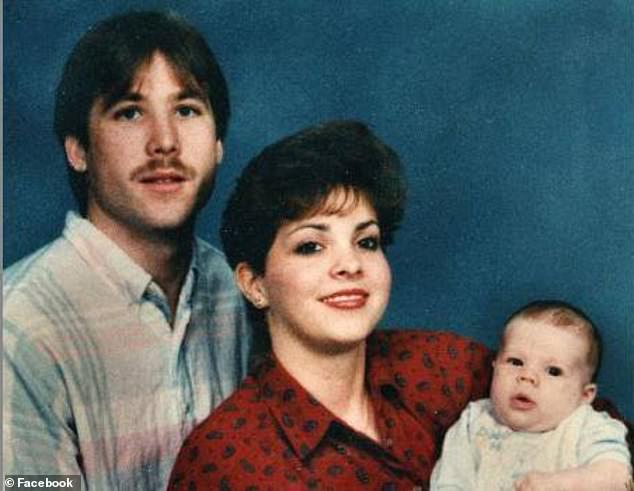 Bonnie Haim (center) disappeared in January 1993. Her purse was found in a trash bin, and her car was abandoned near the Jacksonville International Airport in Florida. Michael Haim (left) was called a suspect at the time, but he was never charged 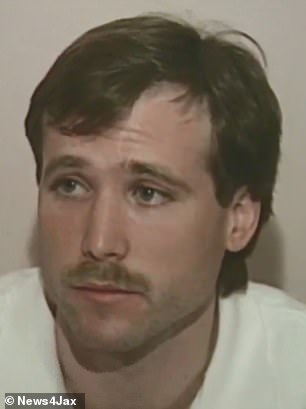 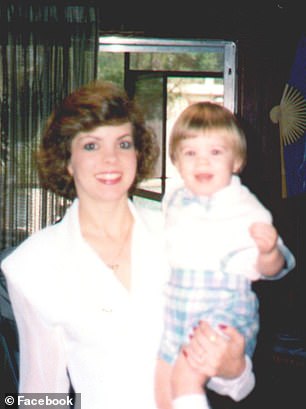 At the time, Michael Haim (left) told police that his wife of five years left the home after an argument about their marriage. He was arrested in 2015 after authorities confirmed that a skull found by their son, Aaron Fraser (right, at age three), belonged to Bonnie (right)

The suspect claimed his wife left their home without their son late one night in January 1993 after they had an argument about their marital problems. He also said he went searching for his wife, although he didn’t notify law enforcement about her disappearance.

Law enforcement wasn’t told about the disappearance until a maintenance worker found her purse and called police.

Haim, who had since moved to North Carolina, was arrested in 2015 after authorities confirmed that a skull found by their son, Aaron Fraser, belonged to Bonnie. 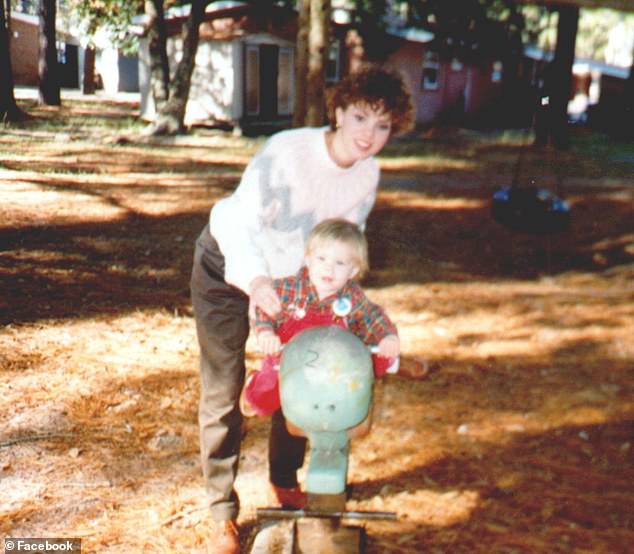 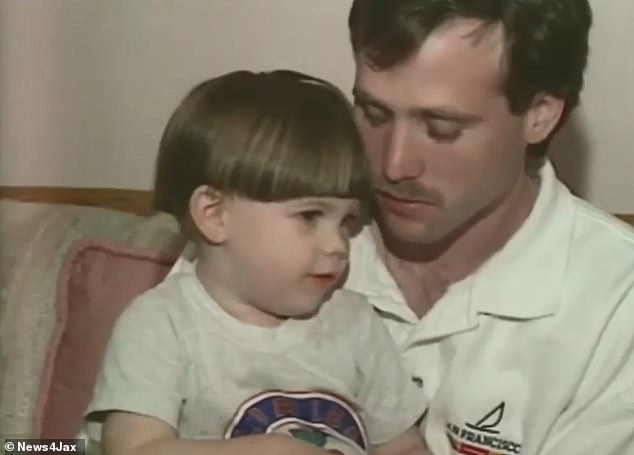 Fraser (pictured with his father when he was three) was three years old when his mother disappeared. At the time, he tried to tell police that his ‘daddy hurt her’

Michael Haim, now 52, had initially been called a suspect in the case, but he was never charged.

The jury for the murder trial decades in the making was seated on Monday evening.

Haim has maintained that he was not involved with his wife’s death.

His son Fraser will also testify during the trial.

‘We will keep positive thoughts for a competent jury that will hear the truth and make the best decision they can,’ the family wrote on Monday.