A fuming car owner claims he returned from holiday to discover a ‘rogue’ parking firm had dumped his £12,000 Audi caked in mud in a boggy field – despite paying £52 for ‘safe and secure’ parking.

Chris Holl resorted to calling the police after allegedly waiting four hours to be reunited with his beloved vehicle after jetting into Manchester Airport with wife Louise at 3am earlier this month.

The father and grandfather-of-two claims he was horrified after spotting his Audi A3 in an unsecured field near Manchester Airport alongside ‘hundreds’ of other vehicles splattered in deep mud.

A fuming car owner claims he returned from holiday to discover a ‘rogue’ parking firm had dumped his £12,000 Audi (pictured) caked in mud in a boggy field 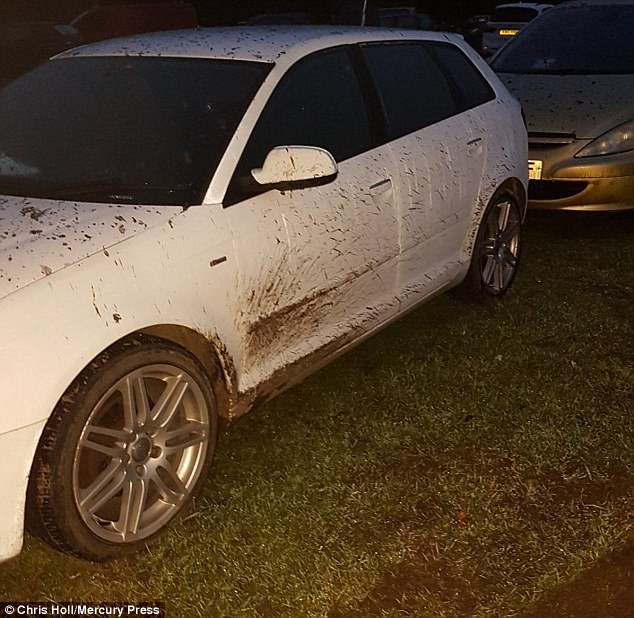 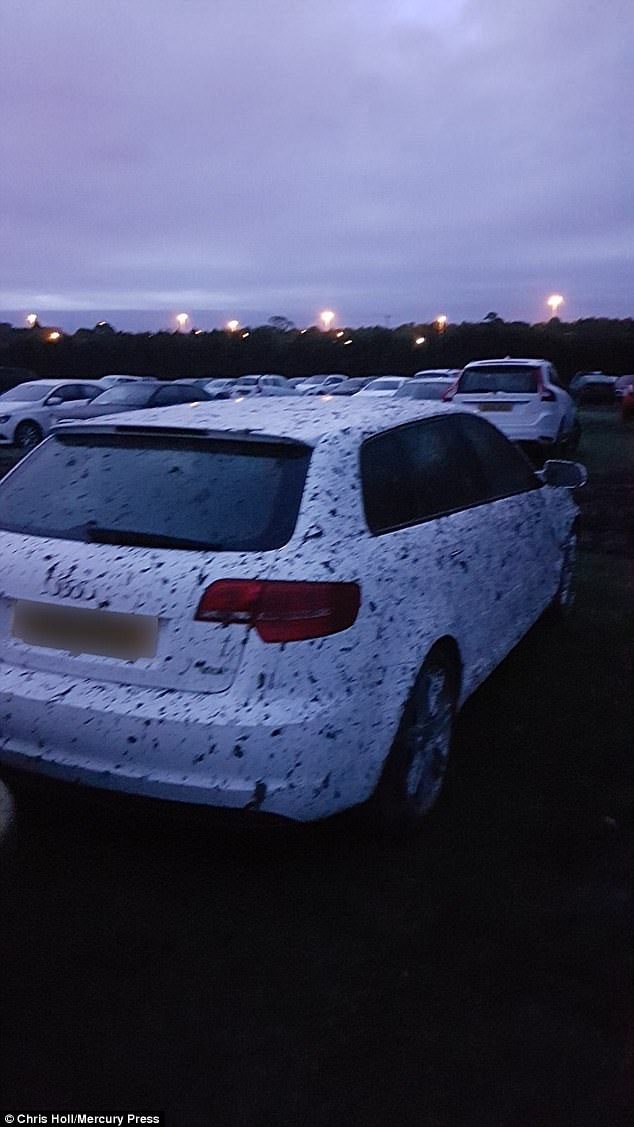 Muddy: The holidaymaker claims he waited four hours to be reunited with his car, which was covered in mud 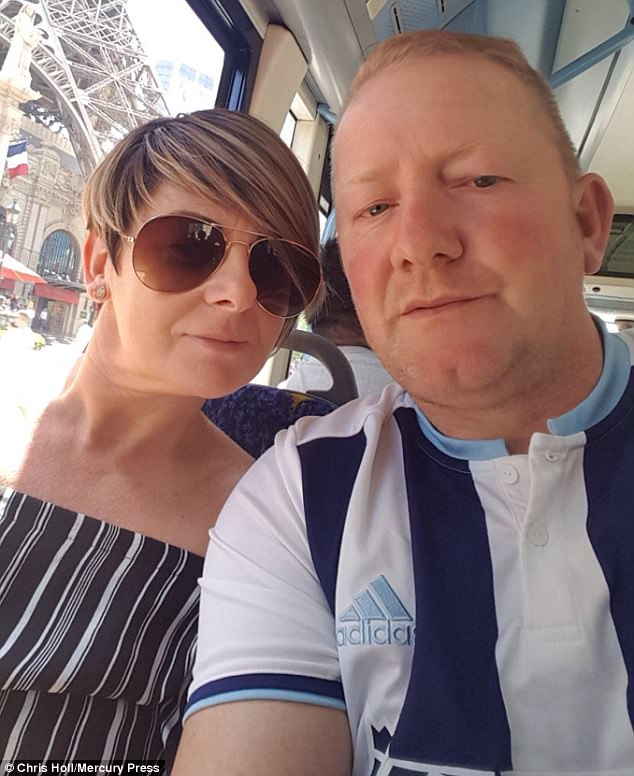 Mr Holl, pictured here with wife Louise, was left fuming after he says his car was left in an unsecured field near Manchester Airport

The 45-year-old even captured the moment two workers appeared to frantically hose his mucky car down before handing the keys over.

Civil engineer Mr Holl, from Tipton, West Midlands, said: ‘I was very angry when I saw the state of my car and where it was parked.

‘I kept thinking, “who in their right mind would dump cars in a field?”

‘For all I know cars could have been taken from there as there were keys hanging around in tubs on tables and nothing to stop someone just driving off.’

Mr Holl initially feared his car had been stolen as a carpark worker earlier claimed they couldn’t find his keys and offered him a cab home. 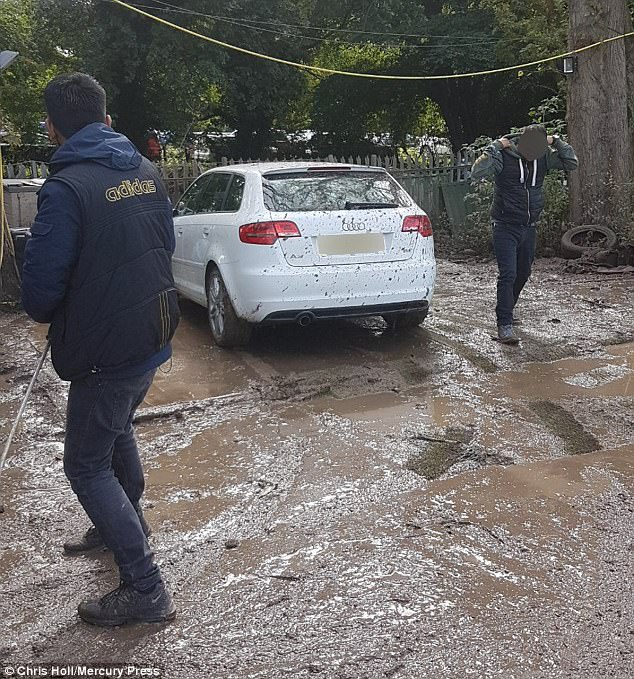 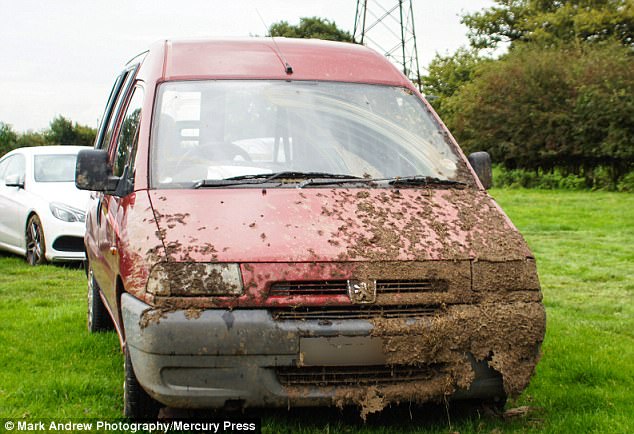 Mr Holl claims his car was left in an unsecured field alongside hundreds of other vehicles, some covered in mud (pictured) 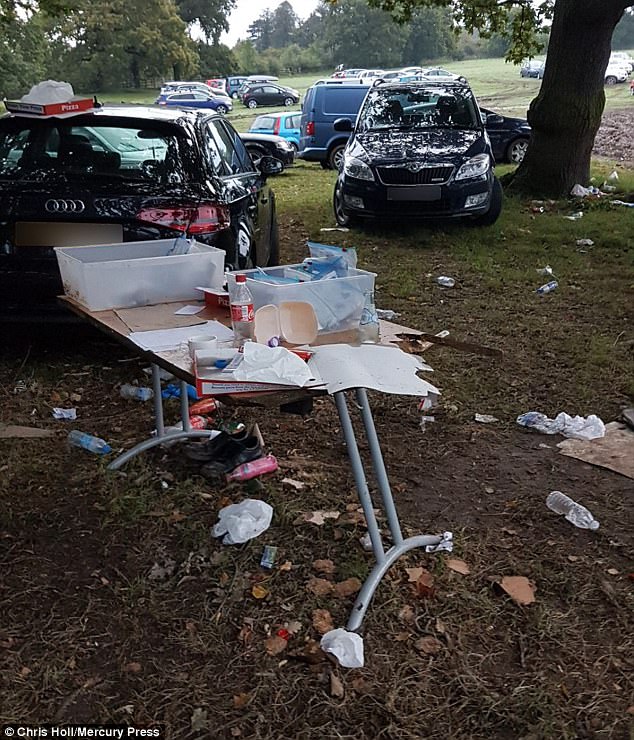 The field, near Manchester Airport, was strewn with rubbish with cars parked haphazardly

But after calling airport police who warned that other holidaymakers had had a similar experience struggling to contact them Mr Holl headed down to the site 1.4 miles away where he discovered his motor.

He said: ‘I rang the police and one officer who came out said he didn’t want to upset me but one woman had waited for five hours to get her car back.

‘When I finally got hold of them I told them I wanted to see my motor – alarm bells were ringing at this stage – he just kept saying “believe me, believe me”.

‘When we got there were tyre tracks all over the place – the mud was a good foot deep – it was absolutely ridiculous.

‘My car was in a right state but thankfully there were no scratches on it. After I took it to the valeters who managed to get it back up to its usual standard. I was just glad to see it in one piece.

‘I was pretty lucky that there was no permanent damage to mine just lots of mud. Safe to say I won’t be using them again, it’s not worth the trouble.’ 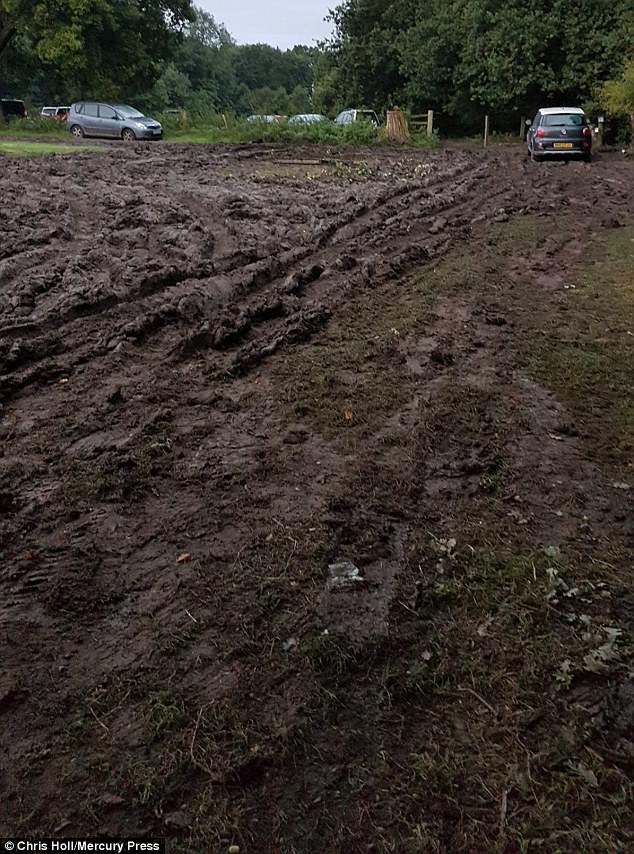 Sodden: Mr Holl said when he arrived at the field (pictured), it was covered in tyre tracks and the mud was a foot deep 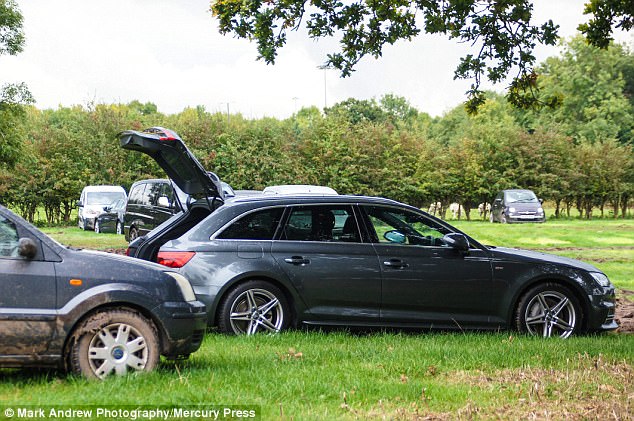 Ezybook has refunded Mr Holl his money and says they have launched an investigation.

An Ezybook spokesman said: ‘Ezybook does not take or store customer vehicles but allows customers to compare and book airport parking deals.

‘Customer vehicles are picked up, stored and dropped by their chosen supplier. All suppliers are carefully selected.

‘Car Park Manchester is a Park Mark® awarded car park which means [the] car park have been assessed by police to ensure that they are properly managed and maintained.

‘As soon as we became aware of customer complaints, we have taken off the supplier from our website and have initiated the investigation. 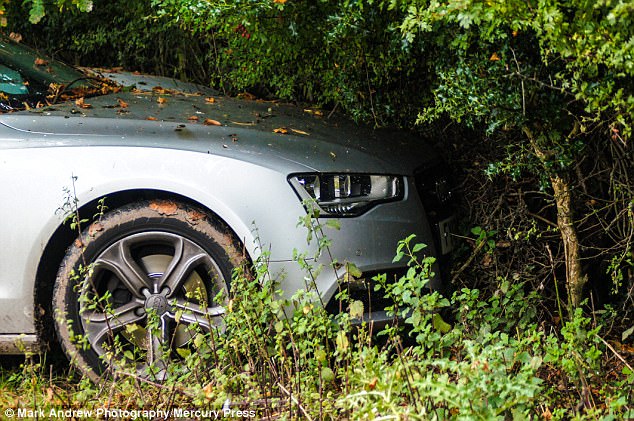 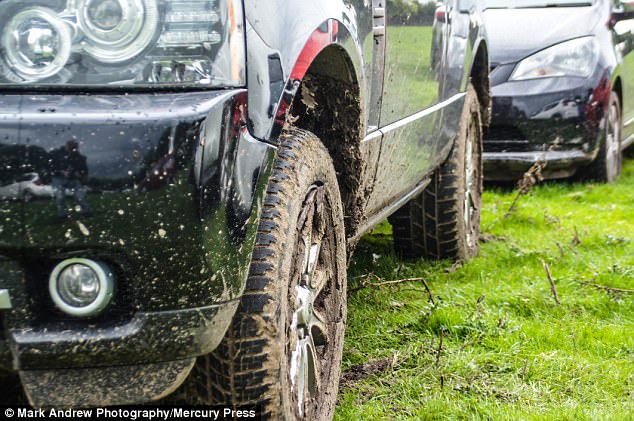 Mr Holl, from Tipton, West Midlands, said: ‘I was very angry when I saw the state of my car and where it was parked. ‘I kept thinking, “who in their right mind would dump cars in a field?” 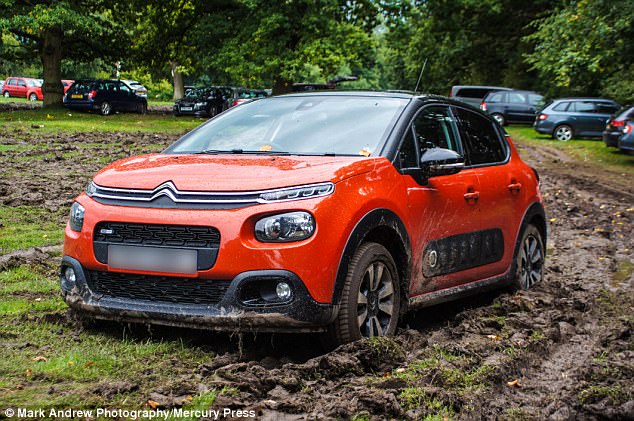 Dirty: Airport police allegedly warned Mr Holl that other holidaymakers had had a similar experience struggling to contact the firm 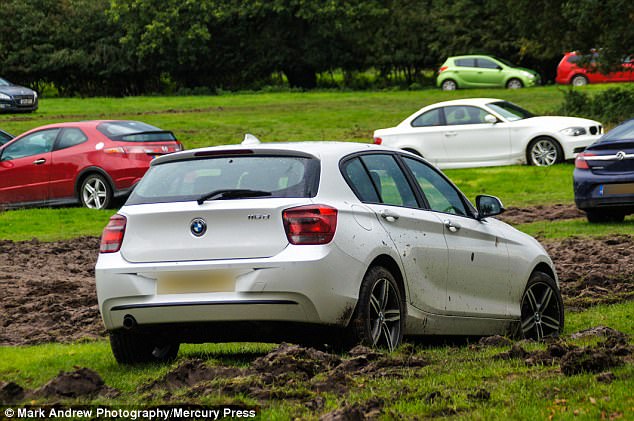 Civil engineer Mr Holl headed down to the site 1.4 miles from Manchester Airport where he discovered his motor – alongside ‘hundreds’ of other cars apparently parked in the mud

‘We don’t allow suppliers to park cars in insecure environments and require suppliers to maintain high standards of customer service.

‘The concerned customer was fully refunded his booking fee and we will work with Car Park Manchester to ensure any customer complaints are addressed at [the] earliest possibility.’

A Greater Manchester Police spokesman confirmed they’d been contacted at 6.14am on September 16 and a complaint had been logged, but as no crime had been committed no further action would be taken.

A Trafford Council spokesman said: ‘The planning enforcement notice stipulated that all cars associated with the unauthorised use of the site for airport car parking be removed from the site by the 23rd August 2017.

‘All cars have been removed when Council officers have visited the site, in compliance with the requirements of the enforcement notice. 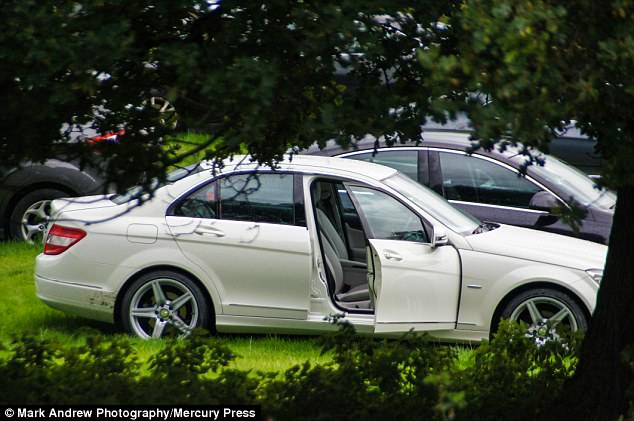 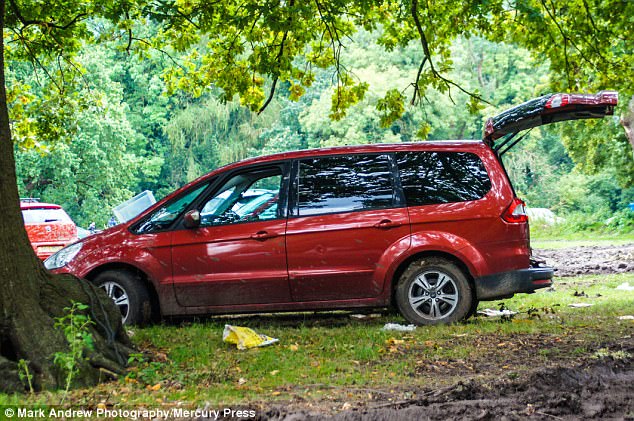 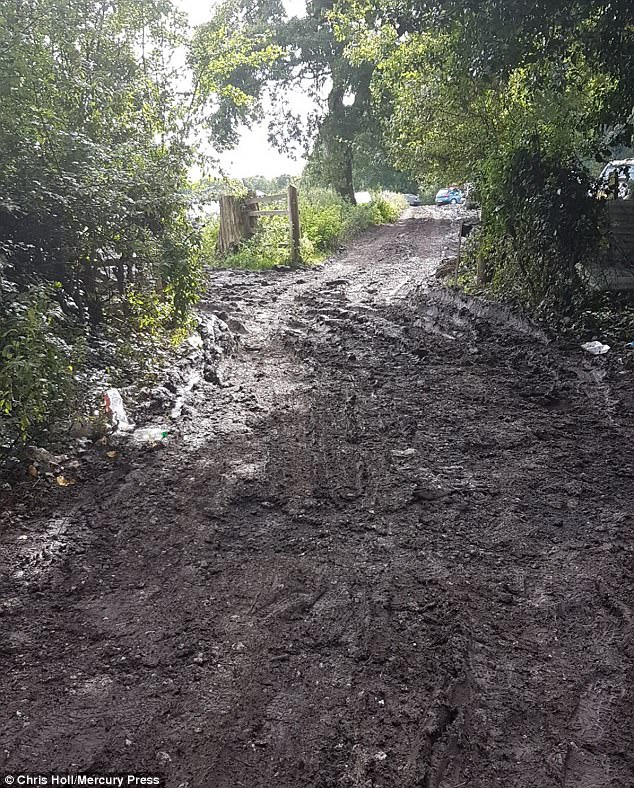 Bog: This picture shows a muddy track near to where cars were parked 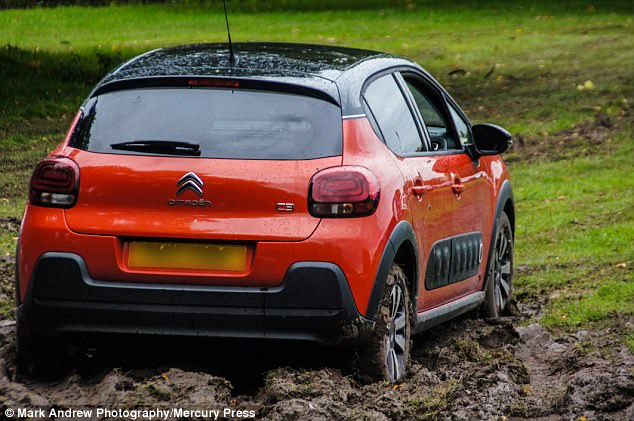 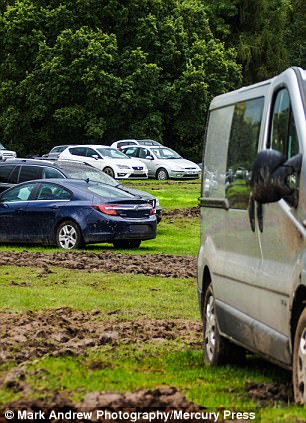 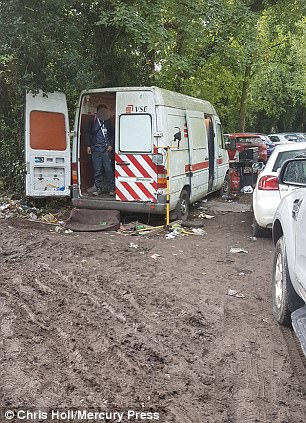 Filthy: Despite paying for ‘safe and secure’ parking, Mr Holl claims his car was left unattended in a field

‘The Council understand that the same operator of the airport car-parking business at Davenport Green Hall has moved cars onto a neighbouring field on Brooks Drive, Hale Barns which is outside the boundaries of Davenport Green Hall and therefore not subject to the requirements of the enforcement notice.

‘The Council are currently in contact with the landowner of the Brooks Drive field and will take appropriate enforcement action to remedy any breach of planning.’

Manchester City Council’s executive member for neighbourhoods, Councillor Nigel Murphy, said: ‘We strongly urge all holidaymakers to be extremely cautious and to do their research through trusted independent sources before handing over their car keys to an unofficial meet and greet airport parking company.

‘All too often, rogue firms leave cars in muddy fields, or on residential streets – and in the worst cases, vehicles have been lost or stolen, leading to real heartache for the innocent customers involved.

‘If the firm doesn’t have the appropriate motor trade insurance in place, then motorists may not be covered in the event that something goes wrong while they’re abroad. 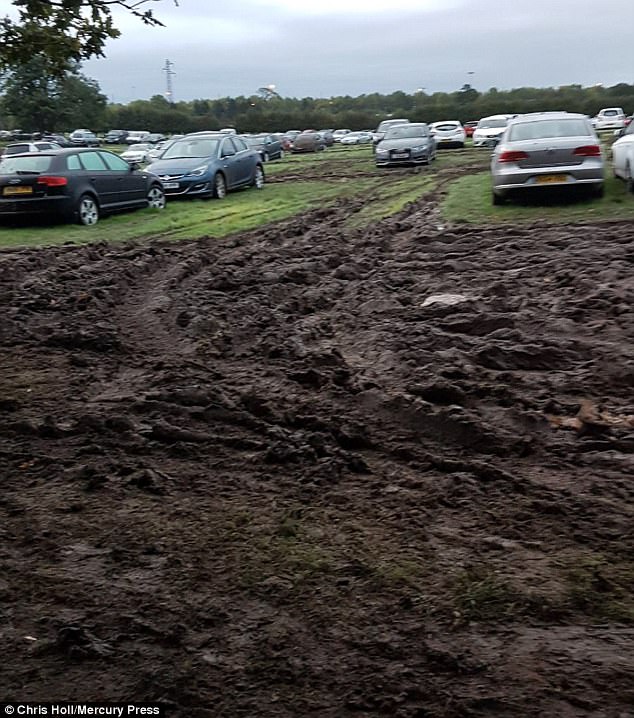 The muddy field was home to hundreds of cars 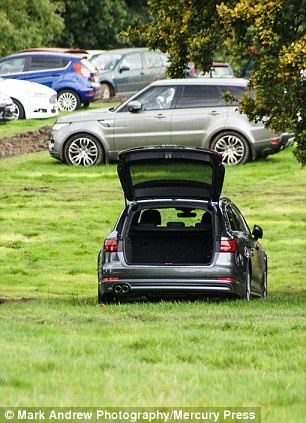 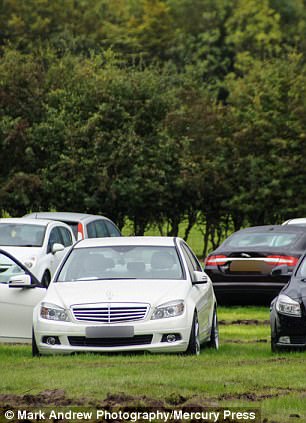 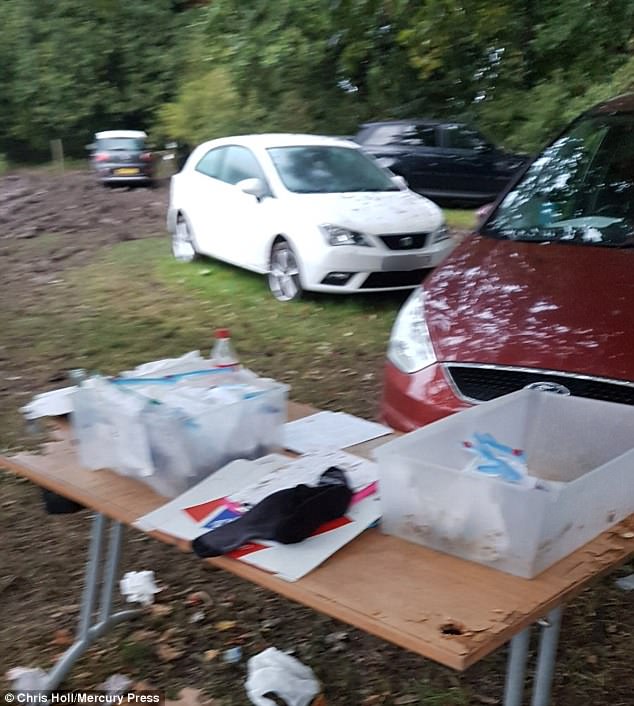