Man ‘grabbed woman’s buttocks, punched her husband in the face and burnt her with hot coffee’

West Virginia man is arrested for ‘grabbing a woman’s buttocks, punching her husband in the face before burning her with hot coffee’ in frenzied attack

David Gabbert of Bridgeport, West Virginia, has been accused of the frenzied attack on a couple on December 23

A West Virginia man has been accused of grabbing a woman’s buttocks, punching her husband in the face and then throwing hot coffee over her after ripping her shirt.

David Alexander Gabbert has been identified as the responsible party for the frenzied assault at a Circle K store in Bridgeport, on December 23.

Police say Gabbert crashed a vehicle near the convenience store, and, along with two other passengers, he then walked inside.

Encountering the victim, Gabbert is said to have made a lewd comment to an unnamed woman at the counter, before grabbing her behind.

‘She stated she then told him not to do that, and as she was walking outside of the store, he said more vulgar remarks to her,’ according to Bridgeport Patrol Officer, Kris Burgess.

Outside, the altercation continued and Gabbert allegedly began to verbally assault the woman’s husband, who tried to extinguish the conflict, as their two-year-old daughter was in the car. 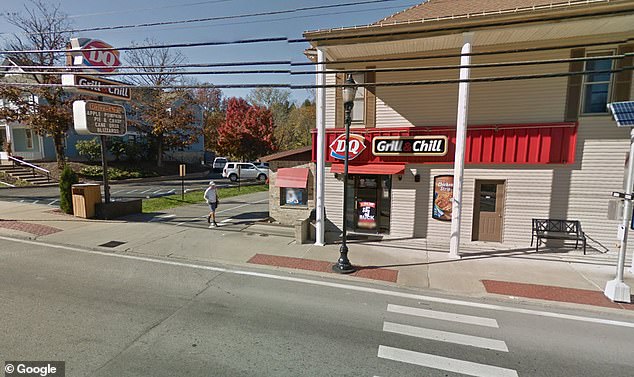 The altercation happen at a Circle K, next to a Dairy Queen in Bridgeport. The attacked started in the store and escalated in the parking lot

The defendant is then said to have punched the husband in the face, who was sitting in the passenger seat, before launching a donut at him.

Gabbert was pushed away from the car by the female victim, and in the scuffle he reportedly ripped her shirt and threw burning hot coffee over her.

The woman suffered burned to her chest and arm.

Burgess said the police have interviewed three other witnesses who have all helped to corroborate the claims.

Gabbert has been charged with malicious assault and misdemeanor battery by Bridgeport police.