Man hacks breasts off a naked female statue in Algeria

A man has been arrested after hacking off the face and breasts of a naked female statue in east Algeria.

The man used a hammer and chisel to vandalise the statue which sits on top of the famous Ain El Fouara fountain in Setif, some 167 miles east of the capital Algiers.

Passersby caught the incident on camera and video shows the man ferociously chiseling off parts of the statue.

Damaged: The man used a hammer and chisel to vandalise the statue which sits on top of the famous Ain El Fouara fountain in Setif, some 167 miles east of the capital Algiers

The Ain El Fouara is a famous landmark in the city of Setif and the statue of the woman was added to complete the fountain in 1899.

Video shows the man aggressively hacking at the sculpture while a crowd loudly protests.

Passers by try to stop him, hitting him with sticks and throwing objects at him.

Finally two men climb up onto the statue and manage to wrestle the hammer out of his hand. 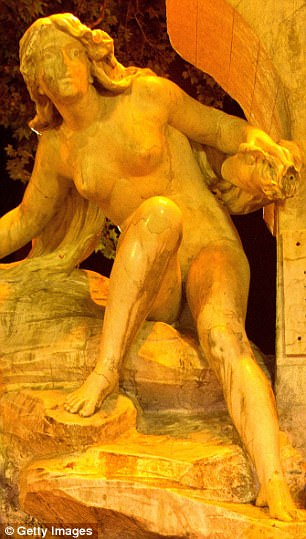 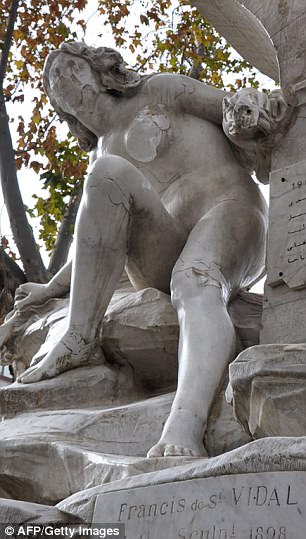 Before and after: The statue is pictured before this week’s vandalisation, and after

The footage shows police having to stop the crowds from attacking the man.

The man was  arrested and according to police, he is suffering from a mental illness.

This is not the first time the lady on the fountain has been attacked, and in 2006 an Islamist extremist removed her face and breasts in a similar manner.