A 53-year-old man high on Spice grabbed a girl of five and held her in a bear hug outside a Primark store because he thought she was going to hurt him, a court heard.

Paul Thomson was so addled by the synthetic cannabis he pounced on the girl and held her in the air in front of her pregnant mother and other shoppers.

Passersby wrestled the girl free and Thomson ran off but he was arrested afterwards by a nearby tram stop where he was found to be in possession of a snap bag of Spice.

He later claimed he carried out the attack because the stupefying drug – sold for around £5 a time – made him think the girl was about to assault him.

The child’s mother said: ‘My daughter was shaken and scared and absolutely terrified.

‘I was 28 weeks pregnant at the time and I was worried that it would cause problems with my pregnancy.’

At Manchester magistrates court, Thomson, from Oldham, admitted common assault and drug possession and was given 16 weeks jail suspended for a year.

He shouted: ‘I didn’t want to hurt her or anything’ as sentence was passed.

The incident occurred on July 26 after Thomson had been taking Spice in Manchester’s Piccadilly Gardens.

He was seen flailing his arms wildly around the street outside nearby Primark – and darting in and out of crowds of shoppers.

Prosecuting Carl Miles told the court: ‘The victim in this case is a child. The defendant didn’t know the child or her mother. 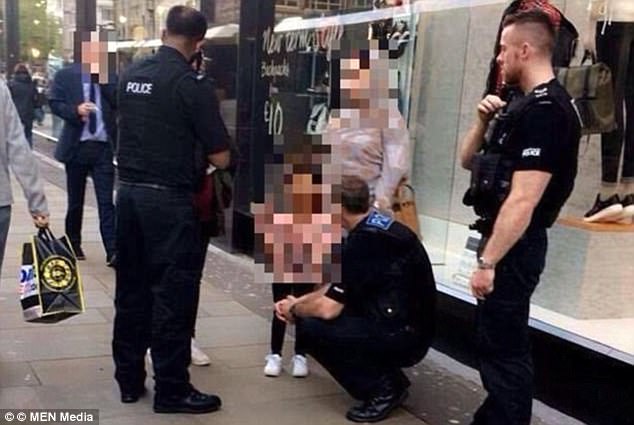 Passersby wrestled to pull the girl, pictured being spoken to by police, free and Thomson ran off but he was arrested afterwards by a nearby tram stop

‘The child’s mother was with a family friend nearing the entrance of the Primark store opposite the Metrolink stop and he daughter was with her and she had a book and a pen in her hand at the time.

‘A male approached the girl and picked her up. Her mother described him as holding something to her daughter’s neck but she could not see what it was.

‘What happened was quite terrifying for her daughter and for the mother as he was behaving very erratically at the time.

‘She described her daughter as screaming and she was pulling at him trying to get her daughter back. Passers by intervened and they managed to get him to put her down.

‘He was described by eyewitnesses as behaving wildly and not making sense and flailing his arms around wildly.

‘One witness described the defendant as not making sense and moving about wildly and darting in and out of people before stopping and turning around like he had seen something. 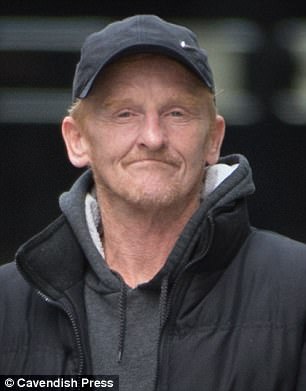 ‘She then saw him grab the girl in a bear hug and lift her up in the air.

‘People then went to the girl’s aid and he put her down before running off towards the Metrolink stop where he was arrested by the police.

‘When he was arrested he was found to be in possession of Spice. Police described on the CCTV that the defendant behaved in an erratic way and it was obvious that he was under the influence of drugs at the time of the offence.

‘During his interview he made it clear to police that he thought that the young girl was going to harm him in some way and was a threat to him but was not clear about exactly what happened.’

The court heard Thomson had 86 offences on his record including 2013 conviction for producing cannabis.

His lawyer Murray Schiffeldrin said: ‘The child victim must have found this to be a distressing and frightening experience for her – but my client too was distressed by his actions.

‘He was originally arrested for abducting a child and when I spoke to him while he was in the police station and he was extremely frightened by that prospect.

‘He admitted the offence and he also said how distressed by his actions he was.

‘This is a defendant in all my years of defending who is honestly genuinely distressed by his actions that day. He fully accepts he is responsible for what he did and accepts that what he did that day resulted in the offence. 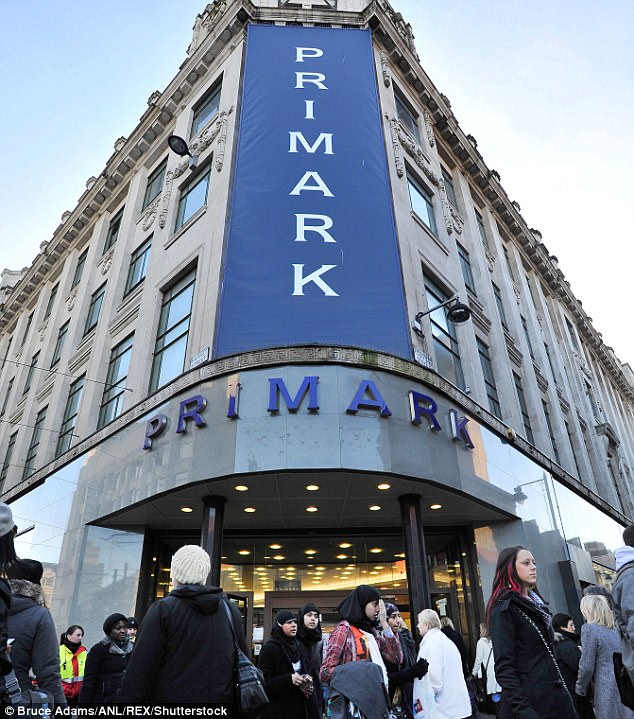 ‘He can get the help he needs as there are some mental health issues that need to be explored and as a result of what has happened and how it has affected him so much he has not taken any drugs or consumed any alcohol since the incident such the effect it has had on him.

‘He has received abuse from people in the area and that will probably continue for the foreseeable future.

‘He did act in a bizarre way, and he was uninformed about what the drugs would do.’

Passing sentence District Judge Khalid Quareshi told Thomson: ‘This is a bizarre offence which you accepted from the outset but you had no intention to harm that child or put her in any kind of fear.

‘No doubt your behaviour was erratic but was the result of having taken the Spice, despite the fact that you didn’t realise what it was.

‘That is the risk people take when they take drugs and there could have been far more serious consequences than there were.

‘I hope the child was not scarred by the event, but children can be quite resilient. I accept you are remorseful.’

Thomson was also ordered to complete a 12 month community order and pay £200 in costs and surcharges.