A mystery man in a tinny has been fined for rescuing a whale calf trapped in shark nets off the Gold Coast.

He sped 500metres into the water at Burleigh Heads on Tuesday morning, taking off his shirt and putting on flippers before diving into the water to cut the whale free.

The man has been hailed a ‘hero’ on social media but has since been fined, it is not yet known what the fine is for or how much it is.

The whale was first spotted in trouble about 7am Tuesday by a drone operator at Burleigh Hill where it was seen badly entangled in the nets.

Seaworld rescue crews were waiting nearby in the water but remained on standby due to a suspected communication issue with the Department of Boating and Fisheries.

During this time the mystery man took it upon himself to untangle the whale and was spoken to by a fisheries rescue team after cutting the whale free.

Social media was flooded with praise for the man, with dozens calling on the state government not to fine him for the act.

‘That’s fantastic good on him and I hope he doesn’t get one single fine either,’ one user wrote.

Another said: ‘Good on you for saving the whale so pathetic to be fined’. 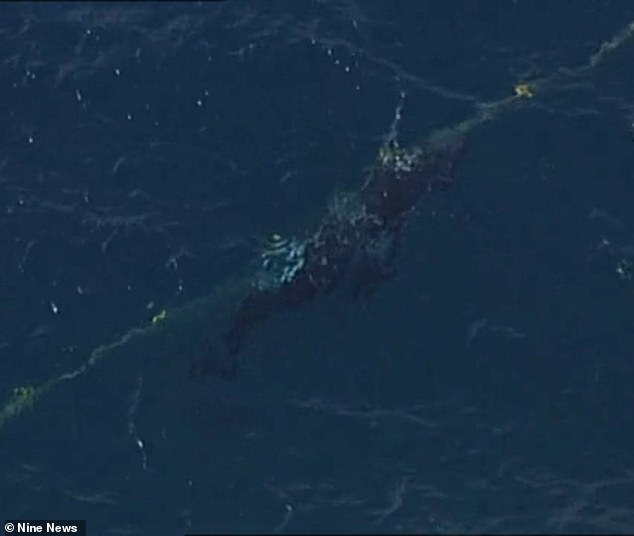 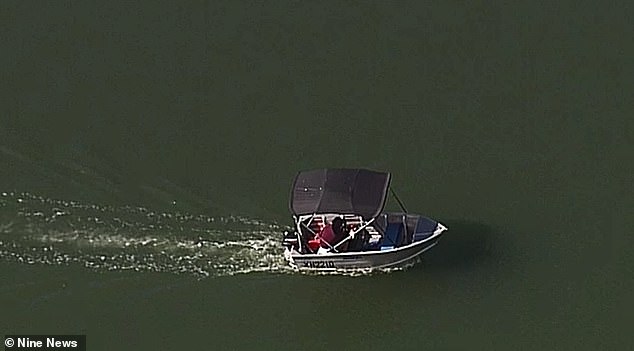 He sped 500metres into the water at Burleigh Heads on Tuesday morning, taking off his shirt and donning fins before diving into the water to cut the baby whale free

Environmental group Sea Shepherd also praised the man and called him ‘brave’ for going out into the ocean alone.

Wildlife photographer Scott Wilson said he was also gearing up to free the whale but was strictly told by authorities not to.

‘Obviously due to public liability, it’s a risk they don’t want to accept,’ he told Sunrise.

Griffith University marine biologist Dr Olaf Meynecke told ABC it was the first time a whale had been caught in nets during May.

‘The condition are also extremely unusual for entanglement,’ he said.

‘It’s quite windy, it’s choppy — usually the whale stays further away when these south-easterly conditions are prevailing.’