A man in his twenties died after being pulled from the sea near Torbay today.

Two others who were lifted from the seas remain seriously injured in hospital today as Devon and Cornwall police have declared a ‘critical incident’ at the seaside resort.

High pressure across the south west means there are severe wind warnings in place for Devon and Cornwall until midday tomorrow, where wind speeds could reach 50mph.

Two men, both believed to be holidaymakers, in their twenties were pulled from the sea at Babbacombe near Torquay at 2pm today and taken to Torbay District Hospital.

One could not be saved and the other is fighting for his life in hospital.

A third man fell into the sea near the resort’s Imperial Hotel at 4pm and was airlifted to hospital with serious injuries.

Sea swell and windy conditions were causing swimmers and kayakers to strike rocks along the shoreline.

Coastguards and police were involved in three incidents in south Devon.

In nearby Paignton, two kayakers were lifted from the sea.

Devon and Cornwall police warned of strong easterly winds across the two counties and advised people to take extra care as they appeal for witnesses to come forward. 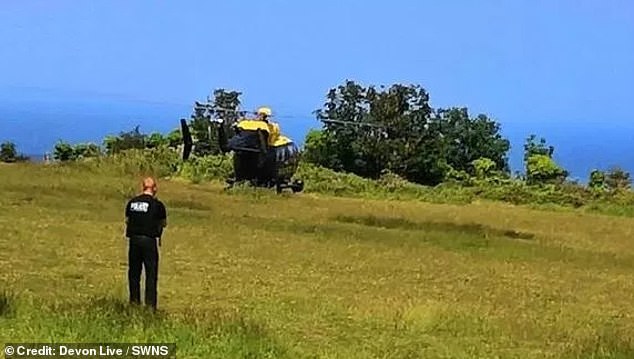 A spokesman for Devon and Cornwall police said: ‘Police were notified around 2pm today that two people had been pulled from the sea off Torquay by the RNLI lifeboat.

‘Emergency services including ambulance, police and HM Coastguard attended the scene where the men were brought into Babbacombe Beach and taken to Torbay district hospital. 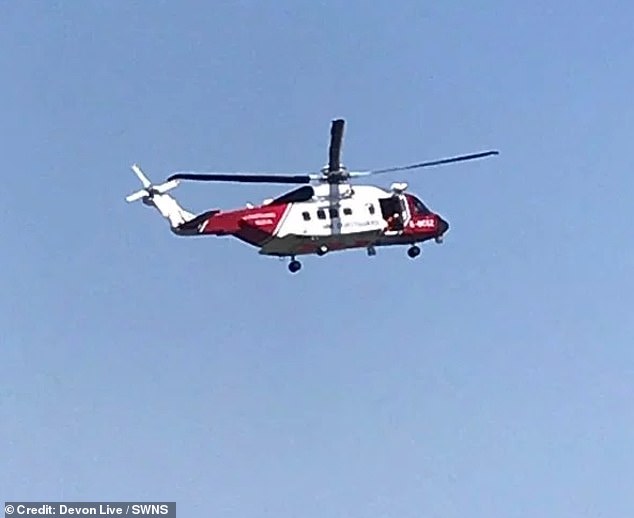 High pressure across the south west means there are severe wind warnings in place for Devon and Cornwall until midday tomorrow, where wind speeds could reach 50mph

‘The Met Office are reporting strong easterly winds across Devon and Cornwall and moderate to rough sea conditions, particularly on the south coast.

‘Anyone entering the sea in this warm weather is advised to be aware of the conditions and take extra care.’

A coastguard spokesman added: ‘HM Coastguard received a call from a member of the public just after 1.10pm on June 27 reporting two people in difficulty in the water near Babbacombe.

‘The two people were recovered to the lifeboat before being passed into the care of the ambulance service.

‘A search is currently taking place in the area as a precautionary measure to make sure there are no other people in the water in distress.’

Public Health England has a Level 2 heat health risk in place, which means hospital patients, children and the elderly in the south west, west midlands and south east are between 60 and 80 per cent likely to be at serious risk of suffering from the heat.

During a previous heatwave in August 2003, a 10-day heatwave resulted in 2,000 deaths with forecasters warning the most vulnerable could see their lives at risk.

The scorching conditions starting today will also come with a price of high pollen and UV levels as well as risks of further bug infestations.