Man inhaled his DENTURES after being given general anaesthetic

A man spent eight days with his dentures stuck in his throat, after he inhaled them during an operation.

The 72-year-old was having surgery to remove a harmless lump in his stomach, and was given anaesthetic with a face mask just before.

The unidentified patient believed his dentures, which consisted of a metal roof plate and three false teeth, had been lost during his time at the hospital.

He went to hospital six days after the surgery, complaining of difficulty swallowing, pain and blood in his mouth.

But doctors were not initially concerned and sent the retired electrician – who ended up needing emergency surgery – home with antibiotics.

The man returned to A&E two days later with the same symptoms, with tests then revealing the dentures were lodged in his voice box.

A man inhaled his dentures after being given a general anaesthetic and they weren’t discovered until eight days later. Pictured, the x-ray showing the dentures in his voice box 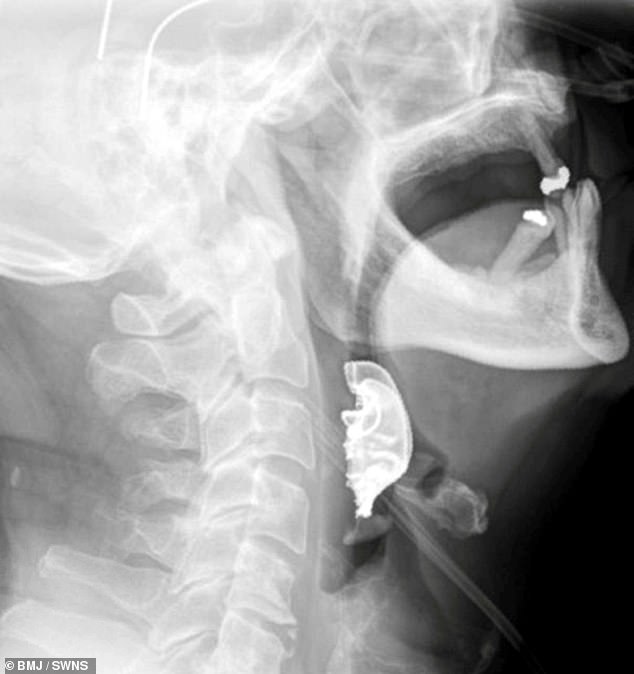 The unidentified man believed his teeth had been lost during his time at the hospital, when in fact they were lodged in throat (pictured)

At least six other similar cases of dentures being inhaled by patients after being given anaesthetic have been reported.

Writing in BMJ Case Reports, doctors told how the man had turned up at A&E, with his symptoms preventing him from eating solid food.

Nothing in his test results prompted them to consider anything was wrong, other than a respiratory infection.

They also believed his symptoms could be the side effects of having had a tube down his throat during his operation.

He was therefore prescribed mouthwash, antibiotics and steroids, and sent home. Two days later he returned with worsening symptoms.

Dr Harriet Cunniffe and colleagues said he had been unable to swallow any of the medicine he had been prescribed and his voice had become hoarse.

He was also feeling short of breath, particularly when lying down, and had resorted to sleeping upright on the sofa.

HOW COMMON IS IT FOR DENTURES TO BE INHALED?

Patients have inhaled foreign bodies into their throat during both dentistry and anaesthesia.

Teeth, a latex glove and a dentures have been inhaled by patients, and on one occasion, swallowing dentures ended in death, according to doctors from James Paget University Hospitals NHS Foundation Trust, Great Yarmouth, writing in BMJ Case Reports.

Often dementia, stroke, epilepsy and alcohol intoxication play a role. But the the majority of cases occur in patients with no known risks.

Among 83 cases of patients inhaling their dentures over 15 years of literature, seven per cent of cases had occurred during general anaesthetic.

Of all cases, 14 per cent of the dentures were found in the throat or voice box.

There are no set national guidelines on how dentures should be managed during anaesthesia, the doctors said.

It is known that leaving dentures in during bag-mask ventilation allows for a better seal during induction – when the anaesthetic is being infused.

Therefore, many hospitals allow dentures to be removed immediately before intubation – when a tube is inserted into the airway to assist breathing during or after the operation.

He was admitted to hospital with suspected aspiration pneumonia – a severe chest infection usually caused by inhaling food, stomach acid or saliva into the lungs.

During this hospital stay, a diagnostic procedure to look at his throat and voice box revealed a semi-circular object lying across his vocal cords.

It had clearly caused internal swelling and blistering, which would explain why the man could taste blood.

When this was explained to him, the man revealed that his dentures had been lost during his previous hospital stay.

He then had emergency surgery to remove the dentures and was discharged after six days.

Over the next two weeks, the man experienced bouts of bleeding, landing him in hospital twice more.

On the third occasion, tests revealed that he had internal wound tissue around the site of the blistering which was sealed to prevent further bleeding.

Because he had lost so much blood, he required a blood transfusion.

He was discharged after two days, but returned again nine days later with further bleeding, which required emergency surgery as the source of the bleed was a torn artery in the wound.

A check-up a week after this procedure showed that the tissue was healing well, and six weeks later he had not needed further emergency care and his blood count was back to normal.

Doctors suggested the severity of the man’s condition could have been avoided if he had been listened to more carefully.

Because chest X-rays and blood tests returned as normal, the man was sent home without much concern.

The doctors wrote: ‘The reason he attended A&E was a sore throat and difficulty swallowing, and therefore, the positive findings on blood work and chest X-ray acted as a distraction.

‘Listen to the story the patient is telling you and do not be distracted by positive findings on investigations.’

They added that staff should be aware if a patient has dentures and put them somewhere safe.

They wrote: ‘There are no set national guidelines on how dentures should be managed during anaesthesia.’