Angry bird! Man is left clutching his head after he is dive-bombed by a blackbird in the street

This is the moment a blackbird which ‘only attacks men’ clawed a pedestrian’s neck as he strolled past a hotel.

The oblivious man, dressed in blue jeans and a green shirt, was looking at his phone as he strolled down the pavement in Lima, Peru, on February 3.

He dropped his folder and smartphone on the ground as the bird swooped in and clipped the back of his head with its feet.

The man was left scratching his head wondering where the bird disappeared to.

The cunning animal flew between buildings and made its escape before the man could react.

Onlooker Maria del Rocío Tafur, 22, returned to her native Peru to visit family members when she came across the birds swooping on people outside the Selina Hotel in Miraflores. 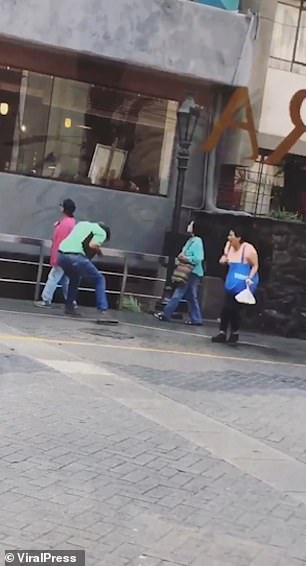 The oblivious man, dressed in blue jeans and a green shirt, was looking at his phone as he strolled down the pavement in Lima (left). The bird clawed the back of his head and flew off as the man flinched and scratched his head (right) 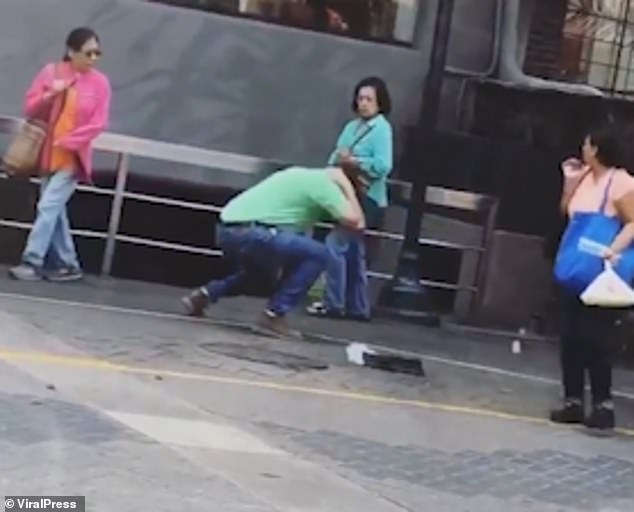 He falls to the floor, clutching hid head in pain, not knowing what just happened

Maria, who was eating lunch opposite, said: ‘I thought it was really funny. The bird was fine when women walked by.

‘But every time a man appeared, he would dive bomb towards them.’