The incident happened at around 4pm and comes amid nationwide unrest over police violence.

The victim has been named Deon Kay, who just turned 18. His mother Natasha told The Washington Post: ‘They took my baby, they just took my baby from me. I need my son back, I want my son back.’

Police Chief Peter Newsham said: ‘Uniformed police officers had information that there were guys in the neighborhood with guns, specifically.

A man was shot dead by police in Washington DC Wednesday afternoon. The incident happened at around 4pm and comes amid nationwide unrest over police violence 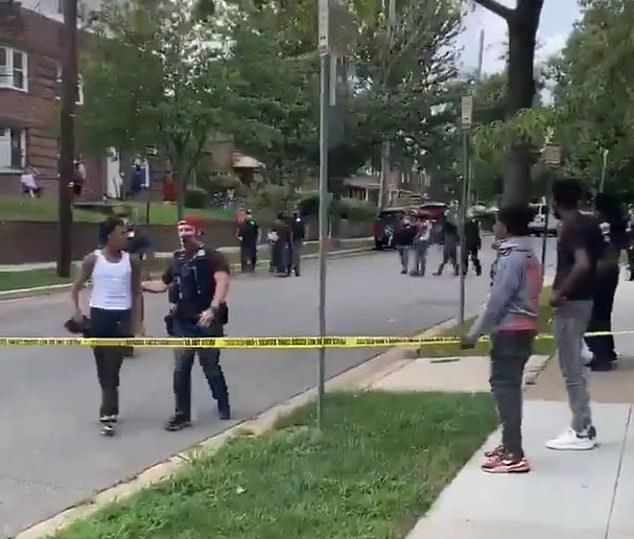 Newsham said the suspects had fled on foot when approached by police; one man was shot and pronounced dead at the scene.

Police say two guns were retrieved from the scene.

White added: ‘We’ve seen this narrative too many times in America, and now it’s hitting home. I talked to his mom about 15 minutes ago and we want to figure out what’s on the body camera footage, to figure out if he was running away why was he shot?

‘[Police] said two weapons were recovered, but when the question was asked, ‘was he armed?’ there was no straight answer, so we want to get the facts of what happened to this young man.’

Police had earlier tweeted: ‘Preliminary information in reference to an MPD Officer Involved Shooting in the 200 blk of Orange St SE. An adult male was taken to a local hospital. A firearm has been recovered on the scene. Chief Newsham will provide an update momentarily.’