‘That’s how we do it in the bush’: Man proves Australian spirit is still alive by cooking a lamb roast in bushfire ashes

There’s nothing more Aussie than a good old-fashioned barbecue.

An Ulladulla man from the NSW South Coast proved that the Australian spirit is alive and well by cooking a lamb roast in smouldering bushfire ashes.

Sporting a cheeky grin, the fisherman was recorded standing in front of a burning log armed with a shovel as a black camp oven rests on ashes in the background.

He points out the positives of a bushfire.

‘You’ve got good burning logs in a blackout to cook your camp oven,’ he says.

The man then turns and picks up the camp oven with his shovel.

‘Yeah we got a nice lamb roast in here,’ he says.

‘There it is. A little bit overdone …. might have overdone it a bit.’

The man changed his mind after removing the lid for the cameras, revealing a tender, delicious lamb roast, a traditional Australian dish.

The Ulladulla fisherman stirred the hearts of thousands of Australians with his cheeky humour, positive thinking and resilience in the face of disaster. 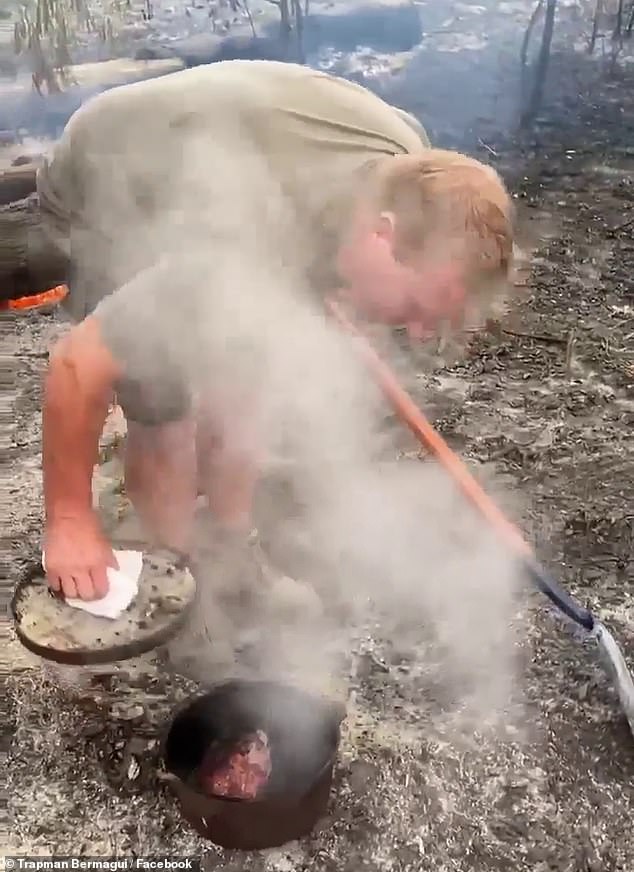 Despite fears that he overcooked the meat, the man popped the lid to reveal a perfect roast

The video was shared to Facebook on Saturday but by Monday morning it had been viewed more than 17,000 times.

It’s not known where the video was shot as fire damage stretches from South Australia’s Kangaroo Island, through Victoria and the Snowy Mountains to New South Wales and Queensland, and volunteers have been fighting the flames far from their homes even when their homes have been threatened.

However it is believed the video is from Ulladulla on the New South Wales south coast as it was posted on Facebook by fisherman Jason Moyce from Bermagui near Narooma in the Bega Valley Shire.

The fisherman blogger, known as Trapman Bermagui uploaded the video, calling it ‘A light story from the fire grounds’. 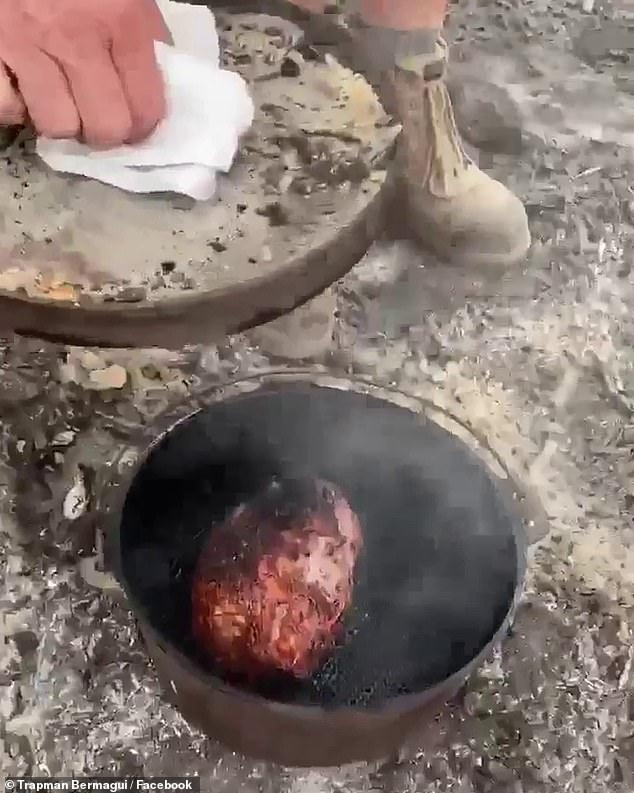 Cooked to perfection, bushfire style: The lamb looked perfectly on the bushfire ash 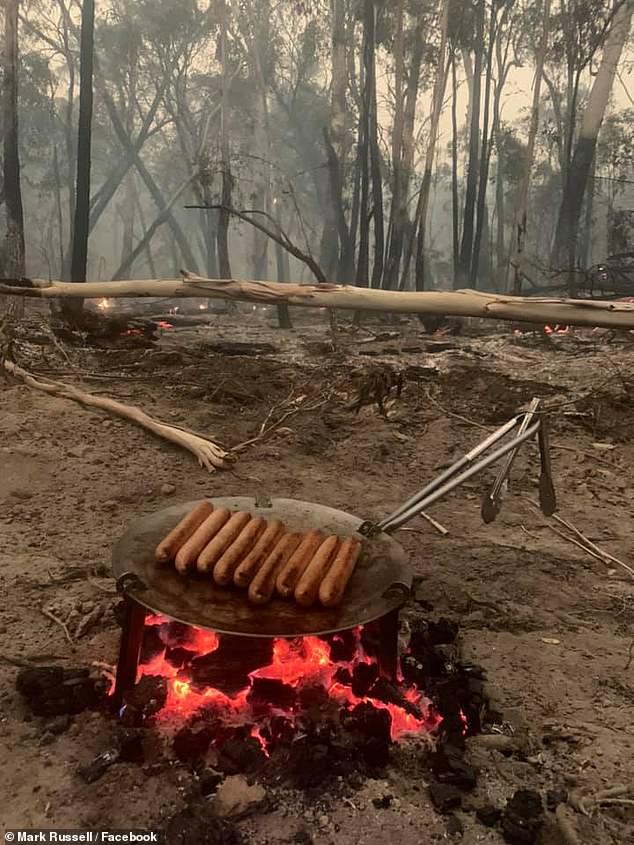 He had previously uploaded pictures of the terrible fire damage on the NSW south coast, and of a huge esky with 200kg of fish he had donated to bushfire refugees – including some left with nothing but the shirts on their backs – by leaving it on the wharf next to his boat.

Trapman’s video of the unknown larrikin was an instant hit with fans.

‘True Aussie spirit right there. Making the best out of a bad situation and having a laugh at the same time,’ wrote Chris Levy.

‘Would be a total lie if I didn’t say I was jealous about having a camp oven feed. Good onya for making the best out of a pretty sh*t situation,’ wrote Luke Molyneux

‘We should have done this at my place,’ wrote Carmen Bellis.

Concreter and fisherman Mark Russell soon posted a picture of his own people doing the same thing with sausages, as eerie beige smoke haze filled the sky behind.

‘Yeah we did the same sorta thing,’ he wrote.

The moments of levity have lifted the spirits of a nation scarred by intense and destructive bushfires that have burnt their way through more than eight million hectares of land since October.

Since fire season began on October 1, the fires have killed more than a billion animals including tens of thousands of agricultural livestock.

For the first time in the nation’s history, 2700 Army reservists were called up to assist the response  and the federal government has declared it will hold a Royal Commission to investigate the fires.