The motorist who rammed his car into a police station last night is understood to have gone on the rampage after being fined £10,000 for breaching Covid regulations.

Police are investigating whether the suspect, who also poured petrol all over the road before setting it alight, was given the maximum fixed penalty notice for breaking lockdown rules.

Although it is unclear what rules he is said to have broken, the man is said to be a local cafe owner, according to claims on social media.

The Metropolitan Police declined to comment on the possible motive but said they were ‘ruling nothing out’ at this stage. 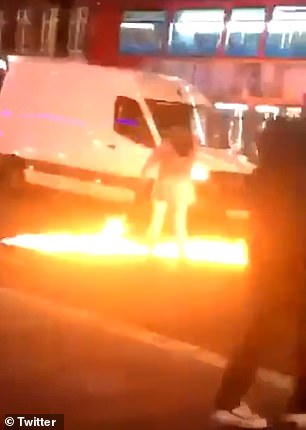 A flurry of footage recorded by witnesses and posted to social media shortly after 7pm chronicle the man’s dramatic arrest.

Video shows a blaze raging on the road outside the police station where traffic has stopped.

Officers are seen bundling out of a marked police car and racing after a man, who is then detained and pinned to the ground by three constables.

Police yell ‘stay back’ and battle the flames using extinguishers grabbed from their car.

The front of the vehicle is pictured wedged inside the police station’s glass doors, which appear to have been smashed open.

Serife Mazlum, who owns a small online business, said another man watching the scene from across the street ran to intervene after the driver had set the fuel alight.

She said: ‘He pinned (the driver) to the ground just as the police was arriving.

‘So by the time the police came and got out of the cars the citizen had already slammed him to the ground.’

She said efforts were then focused on extinguishing the fire, which was ‘just getting worse’.

Asked how she and her husband are now feeling, Mrs Mazlum said: ‘To be honest in Edmonton Green whenever the helicopter flies over your head you know there’s a problem.

‘It is horrifying. As soon as my husband sent me the video he said we’re closing (the shop) and coming home.’ 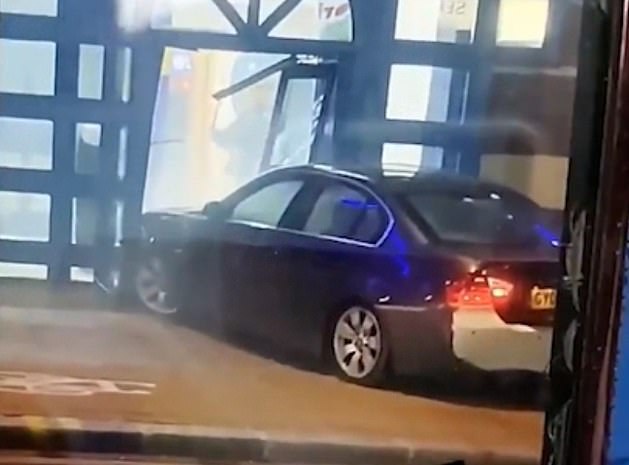 Speaking on behalf of her husband Ogur Mazlum, 34, who speaks limited English, she said: ‘He literally just walked out (of his shop) to just call me and see if everything’s OK at home.

‘Then he said I have to shut the phone quickly. That was when the car crashed into the front of the police station.’

Mrs Mazlum said her husband saw that the car had crashed through a glass entrance to the police station and that a man was unable to enter through a second barrier despite attempts.

‘He casually got out of the car with a tank of petrol. He poured it down from the car into the middle of the road and then he just set it on fire.’

Mrs Mazlum added that ‘luckily’ the man had ‘missed a spot’ and the flaming petrol did not reach traffic which had stopped on the road nearby.

Peter Allimadi, 30, from Edmonton, who works in Whitehall, said he heard ‘shouting, a loud crash and sirens from everywhere’.

He said: ‘I came out of the Lidl to see what the commotion was about, police screaming instructions to citizens to back away, some scared shoppers, commuters and parents running from the scene.’

Unverified footage shows a cordon outside Edmonton Police Station on Fore Street, which has been evacuated, according to sources

Speaking on behalf of Mr Mazlum, who speaks limited English, his wife Serife Mazlum, 32, said: ‘He literally just walked out (of his shop) to just call me and see if everything’s OK at home.

‘Then he said I have to shut the phone quickly.

‘That was when the car crashed into the front of the police station.’

No injuries to any police officers or members of the public were reported.

Commander Ade Adelekan said: ‘This appears to have been an isolated incident and does not seem to be terror-related. I am satisfied that there is no wider risk to the community.’