Man reveals how being called Sherlock Holmes comes with perks, especially in the world of travel

You don’t have to be a detective to work out that being called Sherlock Holmes would get you some attention.

An entrepreneur from Florida named after the world-famous sleuth divulged to MailOnline Travel the effect the moniker has had on his life and confirmed that this is indeed the case.

But the 55-year-old – whose father is, remarkably, also called Sherlock Holmes – revealed that it has also resulted in all manner of perks, especially in the world of travel, from room upgrades to gifts of chocolate. 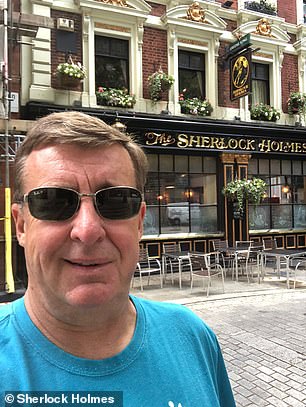 Often, the reason is that hotel staff think his name is a pseudonym to disguise an A-list identity.

Recalling one encounter, he said: ‘I was staying at a rather smart hotel in Orlando, Florida, with my dad, also Sherlock Holmes, and we decided to have a round of golf.

‘Around about the third hole, we are on the fairway, and two golf carts with guys dressed in suits drove up.

‘The men presented us with a platter of frozen chocolate golf balls. After a few minutes, I commented that I was sure they had not recognised us.

‘They came clean and said that they often have famous people play and they were sure the two Sherlock Holmes’s had to be pseudonyms. They stayed for a few holes and we had a good laugh.’

On another occasion, Mr Holmes found himself upgraded in a Miami hotel to an ‘amazing suite with two bedrooms and a dining room with room for 12’.

The hotel team believed he was the friend of a ‘very famous’ Latin American singer staying in a room next door and that he was using a code name.

But Holmes prides himself on honesty.

He said: ‘Of course I came clean and explained I was merely Sherlock Holmes. The hotel staff were very good sports about it and left me in this awesome room for my vacation.’

Then one time in Mexico, four members of staff turned up at his hotel door in a bid to meet the ‘famous’ visitor carrying a ‘lovely gift basket’ complete with a special welcome card with a Sherlock Holmes motif.

When flying, Mr Holmes said airline staff are very professional and ‘seldom comment’ – but he always causes a stir among security staff.

He said: ‘On return from an international trip, I recently had the agent call over a group of his peers to all take a look at my passport.

‘I cannot remember if I ever cleared security without the agent doing a double-take and often sharing that this has made their day.’ 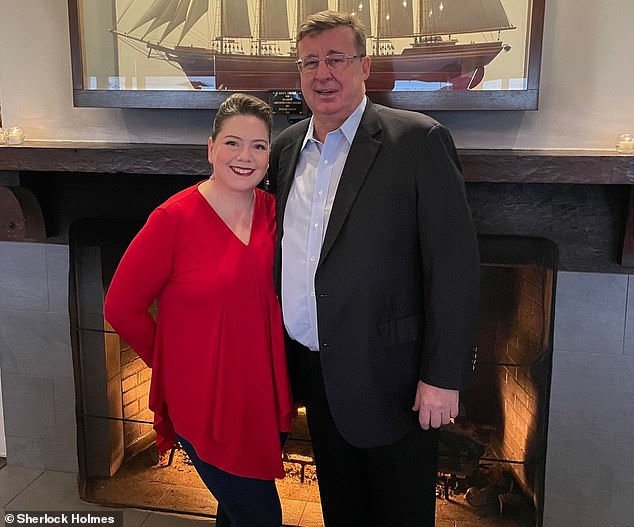 Mr Holmes is pictured here with his wife, Jo, who ‘loves the name’ 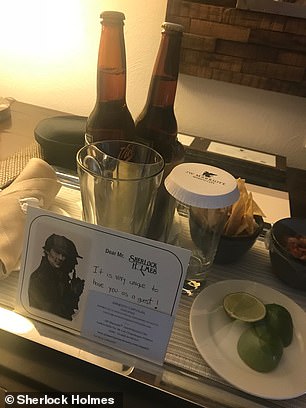 A gift bestowed upon Mr Holmes by hotel staff in Mexico

Mr Holmes is a frequent business traveller and enjoys a bite to eat and a shower in airport lounges – another place where he gets some funny looks.

‘I have to say that in every language at every lounge, I always get a smile and a question about my name,’ he mused.

‘Normally, this is followed by a personal tour of the facility and a greeting by name when I leave. People just like saying “goodbye, Mr Holmes”.’

On his travels, Mr Holmes likes to seek out Sherlock Holmes-themed spots, with one of his favourite haunts being the Sherlock Holmes pub near London’s Charing Cross station. He has also visited the former Park Plaza Sherlock Holmes down the road.

Mr Holmes has also found that his unique moniker is a rather good icebreaker, which has benefitted him in the world of business.

He explained: ‘When I started my company, Genware Computer Systems, in the late 80s, in the field of business intelligence, my name really stood out.

‘I have never had much of an issue with conversation starters and my name allowed me to quickly connect with people that I met for the first time.

‘In a few cases being called Sherlock Holmes has even landed me initial meet and greets, so I would say from a marketing standpoint it has been very beneficial.’

With the release of the Sherlock Holmes movie in 2009 starring Robert Downey Jr and the highly successful BBC TV series that came out the following year with Benedict Cumberbatch as the lead, Mr Holmes witnessed a renewed interest in his name.

This, he says, helped him on the romantic front. His now-wife, Jo, was pretty excited to tell her friends about dating a Mr Holmes.

He said: ‘It did not hurt that a Sherlock Holmes movie was airing when we met, which was brilliant PR for me.

I have to say that in every language at every airport lounge, I always get a smile and a question about my name

‘Jo loves the name, but as with most found it a little funny to start with and also realised it was quite hard telling people that she was getting married to a person in a foreign country with the name Sherlock Holmes.

‘Jo was living in South Africa when we met and her mom wanted to know if I was a “real” person.’

And why was he called Sherlock Holmes? The business owner said he was simply named after his father.

He said: ‘This is the number one question I receive and there are actually two answers. I was named after my father, so we have to go back another generation. When I asked my grandmother how she selected the name her reply was always that she liked the name. Of course, I had hoped for more. Speaking to one of my father’s older siblings, my aunt, I was told that since the family had seven children already, the kids convinced my gran to name my dad Sherlock.’

Growing up in South Africa, Mr Holmes first realised that his name was a little different when the teachers made a big deal about it. And he remembers being teased by the other children.

But he decided as a child to be ‘proud’ about his name and refused to adopt any nicknames.

When he was 22 and moved to the US for work, Mr Holmes then saw things change, with his name working in his favour – it gave him some ‘street cred’ and helped provide him with confidence.

The father-of-one said: ‘Back in South Africa, I had always been somewhat shy and introverted. In the States, my name didn’t allow me to. I realised that I needed to be a little more outgoing with friendly Americans who constantly quizzed me about my “cool” name.’

Asked if he has an affinity with the fictional character, Mr Holmes concluded: ‘I would have to be honest and say that while I have read some of the books, and have enjoyed most of the movies, I see myself more as a fan of my father as he was always a role model for me.’