By Alice Evans For Mailonline

This is the stomach-churning moment a man smashed into a fence after a loop-the-loop swing stunt went wrong.

In a video shared online, a group of adults who appear to be in a children’s playground can be seen egging on one man as he stands in the seat of a swing.

Four friends held down the legs of the swing, in an unknown location, to stop it from tipping as the man started to rock backwards and forwards.

As he gained momentum, the friends had to work harder and harder to keep the swing stable.

The stuntman swooped higher until he began swinging in continuous loop-the-loops over the top of the bar and back down again.

But the fun stopped when the man lost his grip on the chains either side of the swing and was flung forwards.

He careered into the fence a few metres forward from the playground feature before crumpling in a heap on the ground. 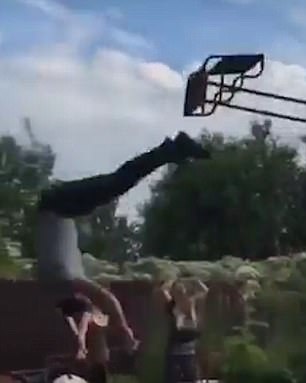 Loop-the-loop horror: A group of adults in a playground in an unknown location can be seen egging on one man (pictured) as loops over the bar of the swing. They seem to be laughing and enjoying themselves until he loses grip and flies into a fence

His companions seemed to start laughing at his blunder before realising he had hurt himself.

It is not known how serious the man’s injuries were.

The footage was shared on a Brazilian website for viral video content with the caption: ‘There goes a good fence’.

Since it was uploaded to YouTube it has had more than 34,700 views.