A techy YouTuber has caused a social media firestorm after stealing menstrual pads from the new Amazon Go grocery store in Seattle — but not just for the reason that one might expect.

Linus, who runs the YouTube account Linus Tech Tips, went to the Amazon Go to check out the new cashier-less system that has the country buzzing.

But in an effort to demonstrate how payment at the store works — and how the company uses a combination of high-tech innovation and the honor system — he took home a package of Always Infinity pads without paying for them.

Experiment: Linus, who runs the YouTube account Linus Tech Tips, went to the Amazon Go to check out the new cashier-less system 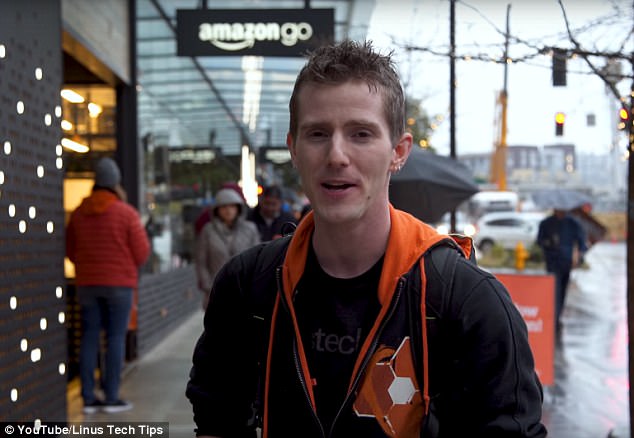 Paying attention: His video has gone viral and caused a bit of an uproar on line

Linus even brazenly admits to stealing from the store in the videos title (which misidentifies the product): We Stole Tampons from the Cashier-less Amazon Go Store.

In the beginning of the video, he explains that the main excuse for going to the Amazon Go store was to buy sanitary products for his wife.

The clip follows him as he heads inside and scans his phone at the entrance, which records his presence there and readies to charge him on the way out. He wanders the aisles, checking out snacks, nut butters, and sandwiches, putting a few things in his backpack. He also picks up those sanitary napkins.

Linus points out how difficult it would be to steal from the store, pointing up to dozens of cameras overhead.

‘The place is absolutely peppered with cameras,’ he says. ‘There are literally hundreds of cameras inside what is only an 800 square foot store.’

Sensors on the shelves and at the exits also keep Amazon quite confident that they can perfectly track what each customer is taking — which, in Linus’ case, they do. 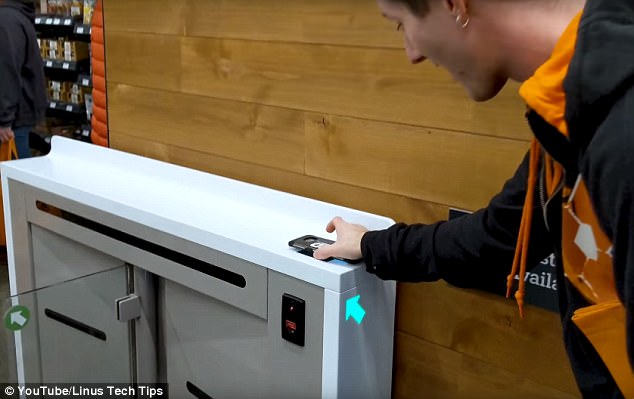 Techy: He shows how the store works, using sensors and customers’ phones to track purchases 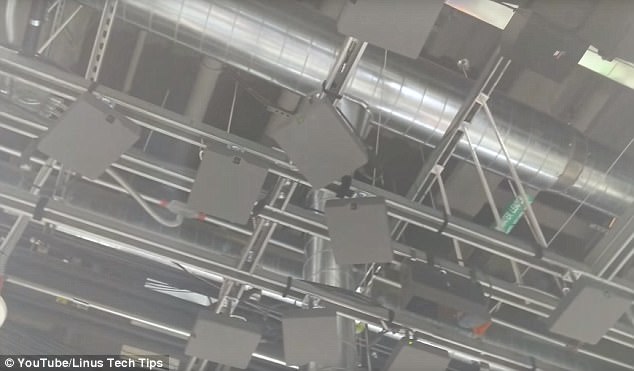 Security: He also panned to all of the cameras hanging from the ceiling 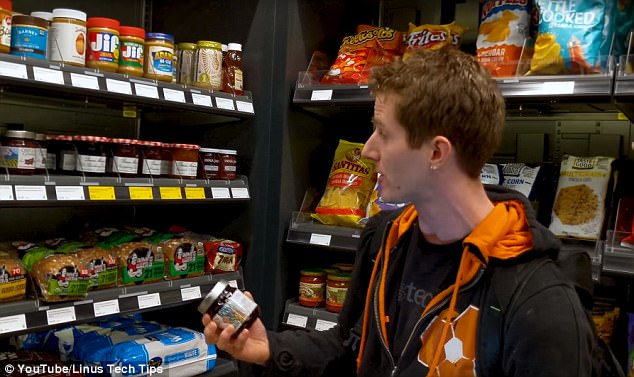 Set-up: In the video’s title, Linus says that he stole tampons from the store

When he leaves, he scans his phone again. At this point, sensors use radio-frequency identification (RFID) technology to figure out what he’s walking out with, and tally up a total to charge to his credit card on file.

Moments after leaving, he gets a receipt on his phone — and this is where he starts to explain how a person could easily take something without paying.

‘Amazon is actually so confident in their system that they’ve built in a feature where if for whatever reason you’re charged for something you didn’t take, you can actually just remove it [from your receipt],’ he says.

‘And, crazily enough, they’re using the honor system!’ he adds.

Linus admits a person couldn’t get too carried away in taking things and not paying for them. Amazon has enough data to learn how their customers shop, and could likely figure out quite easily if to abuse the honor system too often. 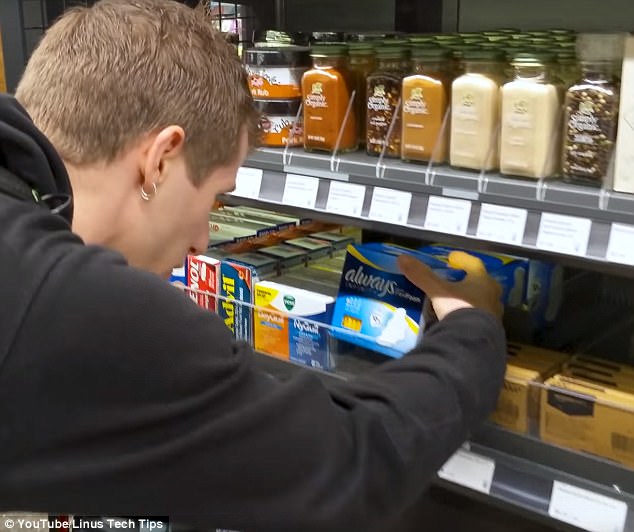 Made: Most commenters have angrily pointed out that he actually takes pads. No one remarks on the odd fact that menstrual products are kept right near the spices

However, it wasn’t hard for him to simply remove the sanitary napkins from his receipt moments later.

He explains that because the Amazon Go store doesn’t have a set-up that allows customers to return items they don’t want, the only way to do it is to simply log into the app and remove the item in question from your receipt.

‘Let’s say I decided… I don’t need these pads after all,’ he says. ‘The way that the refund would be processed would be identical. You would just go into your receipt, you would select an item, you would remove it — I don’t need it, or whatever — and no questioned asked they would give you a refund.

He demonstrates by removing the pads from his purchase, though he most certainly took them and intended to keep them.

Since the video was published on Saturday, it been viewed nearly a million times — and set off furious debate in the comments. 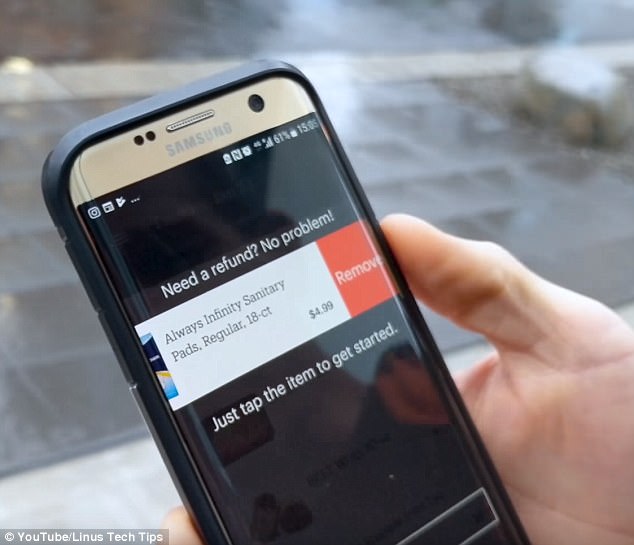 Interesting: He shows how the app allows a customer to easily remove purchased items from their receipts 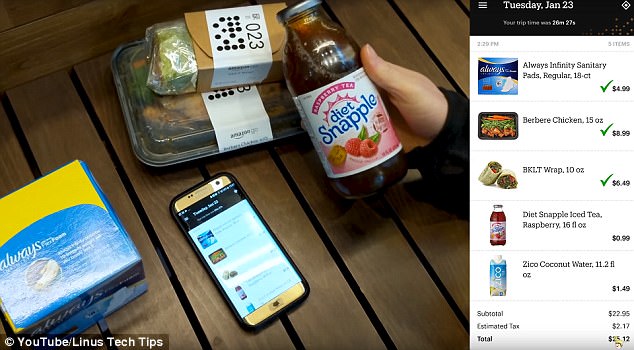 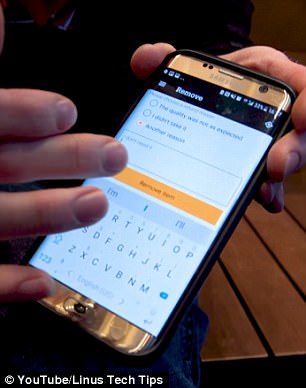 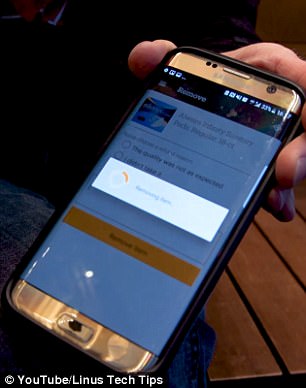 Sneaky: If a customer decides to ‘return’ and item, he or she simply deletes it from their receipt but gets to keep what was purchased

Some commenters argued that he didn’t ‘steal’ the pads at all, but merely ‘returned’ them through Amazon Go’s inefficient set-up and then used ‘stealing’ in the headline as clickbait.

Others have decided that it’s still stealing, due to the intentions behind Linus actions and the fact that he knowingly exploited a loophole: He didn’t actually want to return the pads, he just said that he did on the app to get the refund.

‘You just pulled a Logan Paul and showed your audience how to abuse a system,’ wrote one. ‘People will do this because you showed them how to do it.’

Yet the biggest outrage, by far, is not over Linus taking something and not paying for it — it’s about the fact that he called the pads ‘tampons’.

‘When dudes don’t know the difference between pads and tampons,’ wrote one.

‘Does this guy know the difference between tampons and pads?? Jesus,’ asked another.