A retired film producer whose dream racing car ‘plummeted’ in value when the DVLA stripped away its historic status is now suing for £150,000 damages.

Julian Seddon, a one-time close pal of legendary motorcyclist Barry Sheen, paid £250,000 for the AC Cobra, which he believed was an authentic 1964 model.

But the DVLA later dropped a bombshell when it said the car was built in 2002 and was a blend of ‘old and new parts’, said his barrister, John Black QC.

Mr Seddon ended up having to sell the car for just £100,000 and, in a unique case, is now suing the DVLA to recoup the difference.

The iconic AC Cobras were manufactured in the 1960s at workshops in Thames Ditton.

One was reputed to have clocked speeds approaching 190mph on the M1 in the early hours as the car’s team trained for the 1964 Le Mans event.

But the value of Mr Seddon’s Cobra plunged even faster than that when the DVLA raised doubts about its origins, London’s High Court heard.

And the 75-year-old, who once raced cars himself and has collected over 20 vehicles over the years, says the DVLA was negligent in failing to warn about its doubts before he bought the car in October 2014.

Mr Black said Mr Seddon ‘would not have purchased the vehicle’ had he known that its status as a historic vehicle was ‘liable to investigation’.

But the DVLA is fighting the case, its lawyers disputing that the car’s logbook could be taken as hard proof of its age and provenance.

They also insist that the DVLA simply does not owe a ‘duty of care’ to car buyers like Mr Seddon.

Mr Seddon was unaware that the DVLA were going to strip the car, pictured, of its historic status, wiping more than £150,000 from its value when he went through with the purchase 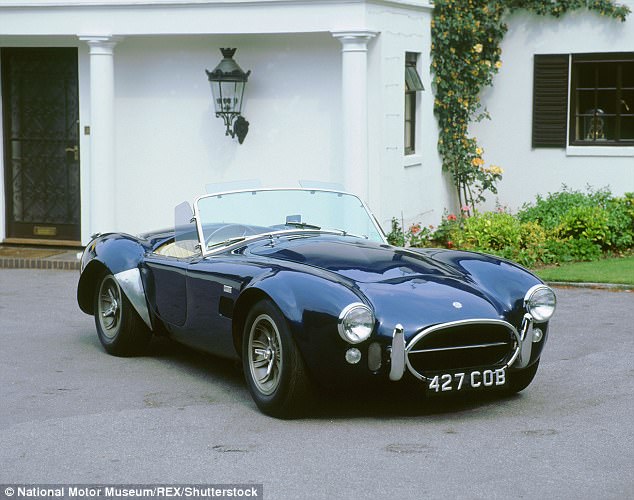 A lifelong collector of high performance vehicles, Mr Seddon says the Cobra was his ‘dream car’ and the pinnacle of his motoring obsession.

‘It was my treat,’ said the onetime member of Barry Sheen’s inner circle of close friends, dubbed ‘The Squadron’.

And, while he had no wish to sell his dream machine, the cost of re-taxing it in line with its new status finally forced him to give it up, he explained.

Without the ‘historic’ label, the car was stripped of valuable tax exemptions and could not compete or participate in historic vehicle events.

Mr Black said Mr Seddon, of Fulham, West London, purchased the AC Cobra ‘in good faith’ – partly relying on the ‘integrity’ of its logbook known as a ‘V5C’.

Owners of classic cars first registered more than 40 years ago can avail of a special road tax exemption.

Instead of paying an annual road fund licence fee, the owner registers their car with the DVLA and receives an exemption.

However, if a car has been rebuilt using too many new parts, it can lose its historic status.

If the car is not considered ‘of historic interest’ it can be subject to both VAT and import duty if imported to the UK from outside the EU.

The logbook described the car’s tax status in black and white as ‘historic’, and stated that it was first registered in 1964.

The QC added that, for Mr Seddon, that ‘confirmed that the DVLA must have been satisfied as to the provenance of the car in order to register it as an historic vehicle’.

And, when he paid for the Cobra, he was ‘utterly unaware that the DVLA had decided to investigate the registration once a new application to register was made’.

Two months before he bought the car, the DVLA already ‘had reason to suspect that the integrity of the (logbook) was in doubt’, Mr Black said.

But, rather than warning the car’s then owner about that, he claimed the DVLA ‘made a conscious decision’ to delay further investigation until the car had been sold.

In March 2015 – five months after Mr Seddon’s purchase – the DVLA decided that the car’s original registration and identity would be declared ‘void’.

That was based on findings that the car was ‘built in 2002 from a mixture of old and new parts manufactured to 1964 specifications’.

As a result, the car had its historic status removed and ‘instantly plummeted in value,’ explained the barrister.

Judge Justine Thornton QC has now reserved her decision on whether the DVLA owed Mr Seddon a duty of care and will give her ruling at a later date.