A 45-year-old man has been arrested on suspicion of trying to steal a £20million Magna Carta from Salisbury Cathedral, Wiltshire Police said.

Detectives questioned a man today following an attempt to steal the manuscript after smashing its glass case with a hammer.

The historic document dating back to 1215 and described as the ‘best original’ out of the four copies made, was enclosed in a glass case in the cathedral and had been on view for the tens of thousands of visitors who visit every year.

Police said that they had been alerted after someone smashed the glass case and after arriving at the cathedral, they conducted a thorough search of the grounds and arrested a 45-year-old man on suspicion of trying to steal the Magna Carta. It has been removed from display while police investigate the attempted theft.

An alarm sounded when somebody smashed the glass case surrounding the Magna Carta (pictured, the damaged display) 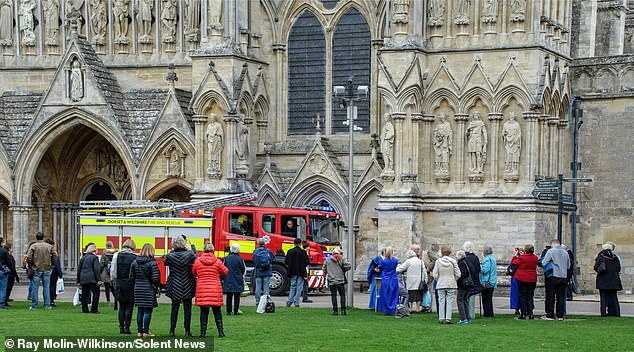 Raymond Molin-Wilkinson, 66, of Salisbury, Wilts, was taking pictures around the city when he saw a group of around 100 people evacuated from the cathedral.

‘I was just outside the building when it happened,’ he said. ‘There was suddenly an evacuation I think – there was an alarm going in the building.

‘The fire brigade and police arrived on the scene, and the police went to the back door of the building and took a gentleman away in the back of their van.

‘There were about 100 people standing outside the cathedral a mixture of tourists and choristers in their blue gowns.

‘They seemed to be quite calm, with many of the drinking coffees and still eating their cakes from the cathedral café – I think they thought it was just a false fire alarm.

‘They were there for about an hour – it was around 6pm that they were allowed back inside the cathedral.’ 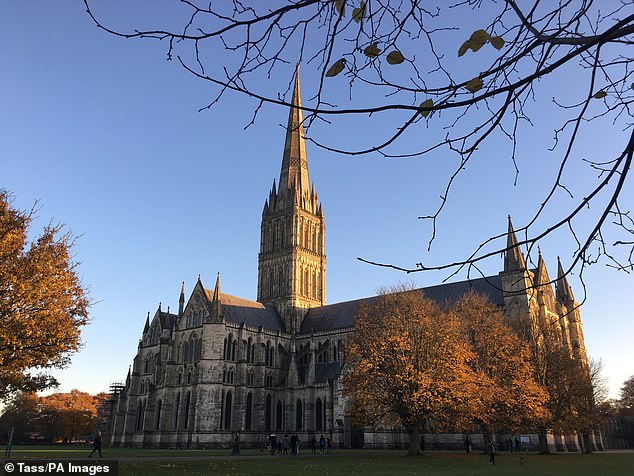 A spokesman for Wiltshire Police said: ‘A 45-year-old man is in custody this morning arrested on suspicion of the attempted theft of the Magna Carta.

‘Shortly before 5pm yesterday alarms were activated at Salisbury Cathedral after an attempt was made to smash the glass box surrounding the Magna Carta. Staff were alerted and police were called.

‘A man matching the description given by witnesses was arrested on suspicion of attempted theft, possession of an offensive weapon and criminal damage and has been taken to Melksham Police custody for questioning. He remains there,” said the spokesman.

‘The Magna Carta has not been damaged and nobody was injured in the incident. We are aware there were a number of witnesses to the incident who may not have spoken to police.

The Magna Carta, Latin for Great Charter, was brought into law under King John of Runnymede on 15th June 1215,. 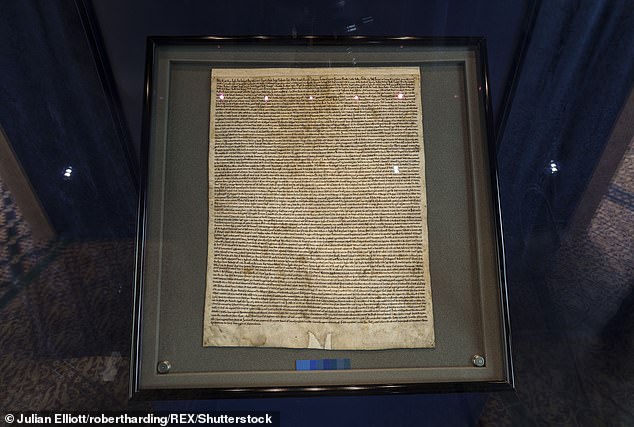 The document (pictured) has not been damaged and nobody was injured during the incident, Wiltshire police say

It was credited as being one of the first documents to limit the power of the crown.

There are just four remaining copies of the Magna Carta. Two are kept in the British Library, one is in Lincoln Cathedral and one at Salisbury Cathedral, which is the best preserved manuscipt. 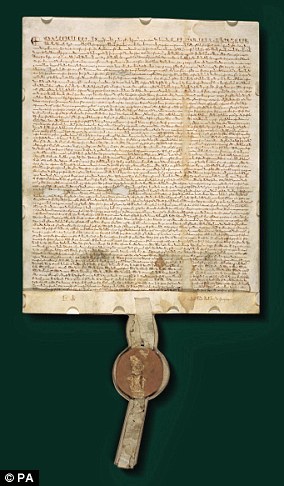