‘Worldwide TV audience… this is our moment.’: Furious Manchester United fans plan ANOTHER protest against the Glazer family before tonight’s match with Chelsea – and vow to be ‘bigger, stronger and louder’

By Charlie Walker For Mail Online

Manchester United supporters will launch another noisy protest against their club’s unpopular owners ahead of the match against Chelsea tonight.

The latest demonstration comes less than two weeks after thousands of fans marched on Old Trafford and boycotted the first 17 minutes of the last home game against Norwich City – one minute for each year the club has been owned by the Glazer family.

Organised by the fan group, The 1958, tonight’s event is set to follow a similar format, with supporters meeting at the Tollgate pub, about a mile from the stadium, at 5.17pm.

A further protest is planned when United face Brentford on Monday May 2.

‘The Snake has been in PR overdrive to make all this ‘Blow Over’. Do NOT be fooled,’ a statement from The 1958 said on Wednesday night.

‘We need to go bigger, stronger and louder than before! Worldwide T.V. audience. This is our moment.’

There has been widespread distrust of the Glazers among a large section of the fan base, since the leveraged buy out of the club in 2005.

Since then, fans have accused the owners of loading the club with debt, failing to invest, poor management and a disastrous transfer policy. United’s initial support for a European Super League increased the hostility. 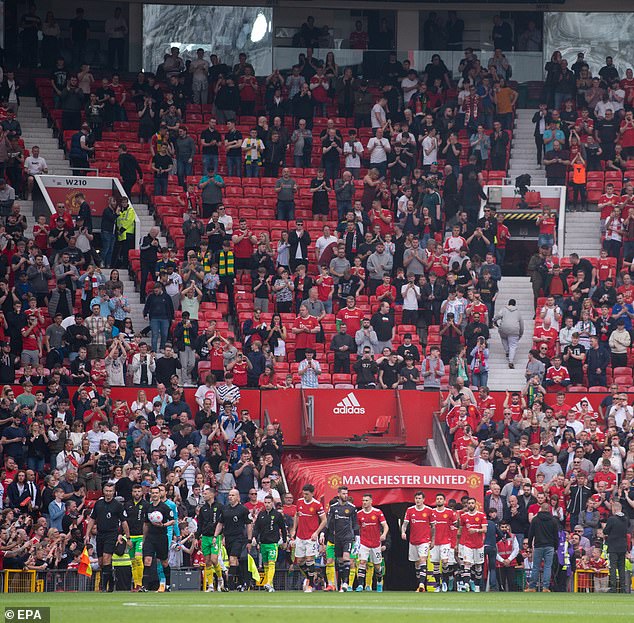 And The 1958 remains unimpressed by the owners’ commitments to listen to fans and invest in the stadium.

‘We now know that we have NO fan share scheme on the table,’ the group said. ‘The parasites WILL sell land to build a stadium loading more debt on the club. The government have agreed to an Independent Football Regulator, which is a step in the right direction.’

The club has said it is ‘continuing to work towards a robust and attractive proposal for fans’ and remains in negotiations with the Manchester United Supporters’ Trust.

With respect to the stadium, United are in discussion with planners over options for improvements or redevelopment to ‘improve the matchday experience for fans’.

Up to 5,000 people joined a march from the Tollgate to Old Trafford ahead of the Norwich match and an estimated 2,000 boycotted the first 17 minutes, missing Cristiano Ronaldo’s opening goal in what turned out to be a 3-2 win. 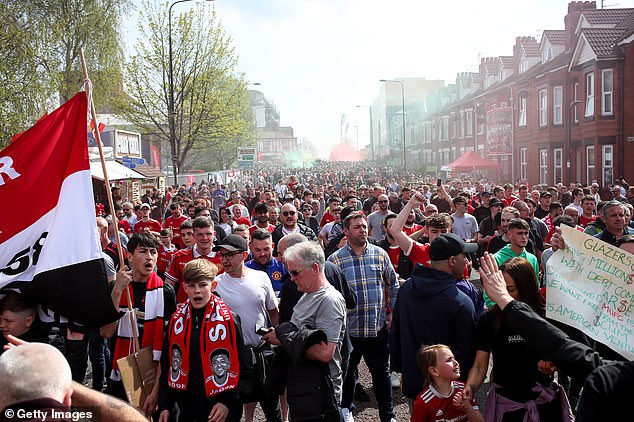 The crowd chanted ‘we want Glazer out’ and ‘Joel Glazer’s gonna die’ as they waved banners and set off red, green and gold smoke flares.

The last demonstration attracted more support than expected and according to police passed off peacefully, in contrast to the violent clashes following the Glazers’ attempts to sign United up to the breakaway Super League in May last year.

On that occasion, hundreds of fans clashed with police outside Old Trafford with some fans smashing their way inside the stadium, causing the behind-closed-doors fixture with rivals Liverpool to be postponed. 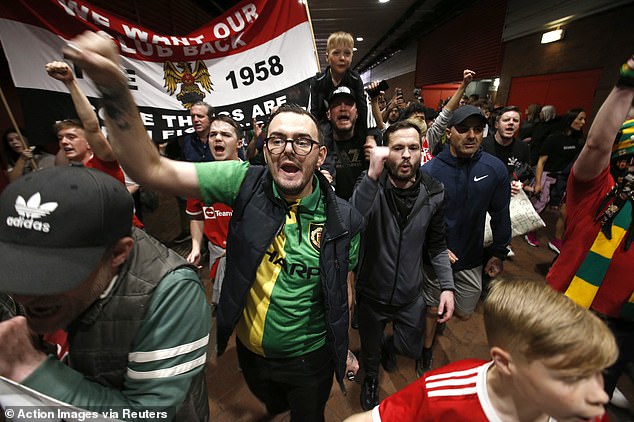 However, another lacklustre season has given fresh impetus to the protest movement with some fans even going to United’s Carrington training ground earlier this month..

Anti-Glazer sentiment has grown during a season of disappointment for the club, who have gone five years without winning a trophy despite plenty of expensive signings.

Fans claim the Glazer family’s focus is on driving up commercial and sponsorship revenues rather than building a winning team on the pitch.