Man United, Man City and Chelsea on alert as Barcelona wonderkid Moriba ‘could leave this summer’

Manchester United, Manchester City and Chelsea on alert as Barcelona wonderkid Ilaix Moriba ‘could leave the club this summer with cash-strapped club unwilling to meet his contract demands’

The 18-year-old has just one year left on his current deal and the cash-strapped Catalan giants have baulked at his contract demands.

Mundo Deportivo reported in March several clubs were keen to prise the midfielder away from the Camp Nou, with Manchester United making a ‘firm offer’.

And now the Spanish outlet is reporting that Barcelona could be prepared to let him leave this summer if he does not lower his demands.

Moriba has been with the Catalan giants since he was seven years old, progressing through the club’s famous La Masia academy.

Moriba, who already has a buy-out clause of £86m, made 14 La Liga appearances this season, and came off the bench in the second leg of Barcelona’s Champions League defeat to Paris Saint-Germain.

His future has been thrown into doubt following his switch from Stellar Group to switch to powerful German agency Rogon, who are now representing him in contract negotiations. 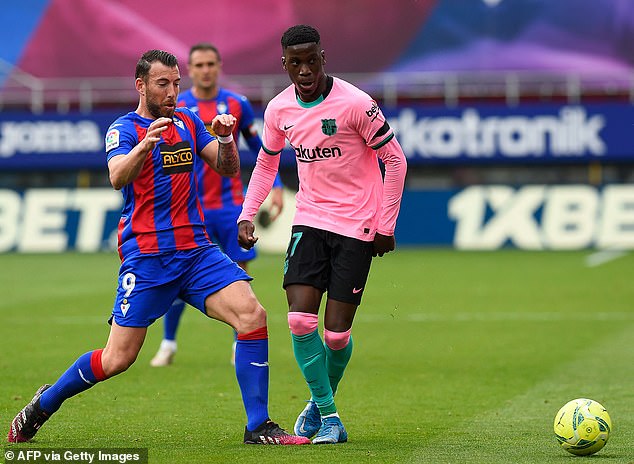 Moriba, who has a buy-out clause of £86m, made 14 LaLiga appearances this season

The report adds that if Moriba does not lower his demands, the club could be prepared to

And that could spark a battle for his signature with the likes of RB Leipzig also believed to be keeping tabs on him.

As his youth contract at Barcelona came to an end in 2019, Moriba was on the receiving end of offers from several clubs, including Manchester City.

His father, Mamady Kourouma, revealed it was only a late breakthrough in negotiations in Spain that prevented his son getting on a plane to England to sign a professional contract with Pep Guardiola’s side.