Frenkie de Jong looks to have poured cold water on a potential move to Manchester United this summer during an awkward exchange.

United have been keeping tabs on the Barcelona midfielder since his old manager at Ajax Erik ten Hag was confirmed as the new man at the helm at Old Trafford.

De Jong made the switch to the Nou Camp in 2019 for £77 million but the emergence of teenage sensations Gavi and Pedri has plunged the 25-year-old’s future in doubt. 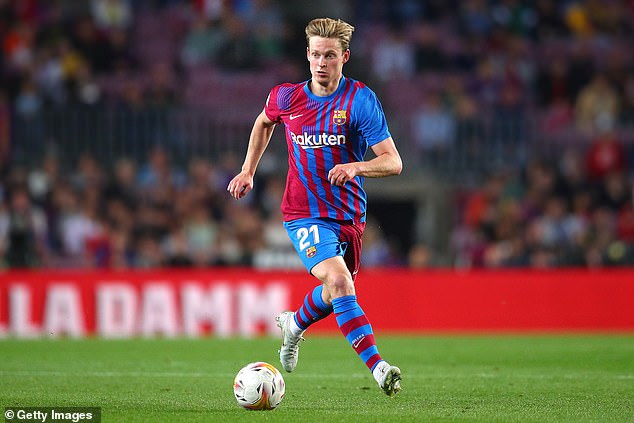 De Jong has been in sparkling form for the Netherlands during June’s Nations League fixtures and spoke to the media following their 2-2 draw with Poland.

The Dutchman was quizzed on his club future rather than anything related to his international form and his response was dismissive of any move to link up with Ten Hag in Manchester.

De Jong was asked: ‘Are you going from the beaches of Catalonia to the cold of Manchester?’

The midfielder replied: ‘No.. I think.. I can’t say anything.’

His tentative response comes after widespread reports that United have already had a £60m bid rebuffed for the star.

De Jong represents Barcelona’s strongest possibility of recouping much-needed funds to bolster their squad this summer and United are expected to try again for the Dutchman.

He was an instrumental part of the Ajax side that reached their first Champions League semi-final in 22 years, in 2019.

Impressive showing during that campaign earned him a move to Catalonia where he has scored 13 times and made 17 assists in 142 appearances across all competitions.