A man charged with first-degree murder in the strangulation death of a 19-year-old University of Illinois at Chicago student has been ordered held without bail during a hearing in which prosecutors told the judge that he had confessed to the slaying.

Donald Thurman, 26, is also charged with criminal sexual assault in the fatal attack of Ruth George, whose body was found last weekend in her family´s vehicle that was parked in a garage on the school’s campus.

Assistant State’s Attorney James Murphy said during Tuesday’s hearing that Thurman was angry that George, who he thought was ‘pretty,’ was ignoring his catcalls and that he followed her into the garage, where he raped and killed her. 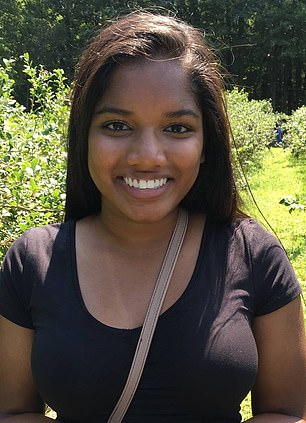 Donald Thurman, 26 (left), has been charged with first-degree murder and criminal sexual assault in the strangulation death of Chicago student Ruth George, 19 (right)

‘The defendant was angry that he was being ignored. The defendant came up behind the victim, grabbed her around the neck from behind, and put her into a chokehold,’ said Cook County Asst. State’s Attorney James Murphy. ‘With his arms still wrapped around the victim’s neck the defendant dragged the victim from the ground and he opened her back seat car door,’ reported ABC 7 Chicago.

When police spotted Thurman in the area of the parking garage the following day and took him into custody for questioning, he told them he ‘knew his DNA would be all over the scene,’ Murphy said.

Prosecutors said police recovered a palm print from George’s car window that matched the suspect, and found a condom on the floor, reported Chicago Sun-Times.

Thurman was on parole at the time of the attack after serving two years of a six-year prison sentence for armed robbery that involved a carjacking.

He is due back in court on December 16.

George’s family had reported her missing mere minutes before she was found dead by university police.

Her last known sighting was at 1.30am Saturday morning, when she was seen going into the campus parking garage.

Police were first called to the scene in the University Village neighborhood around 11am on Saturday after reports of an unconscious person in the back seat of a car.

Emergency staff tried to resuscitate the university student, but she was already dead.

The Cook County medical examiner’s office told the MailOnline the girl’s death had been ruled a homicide and that she had died ‘as a result of strangulation’. 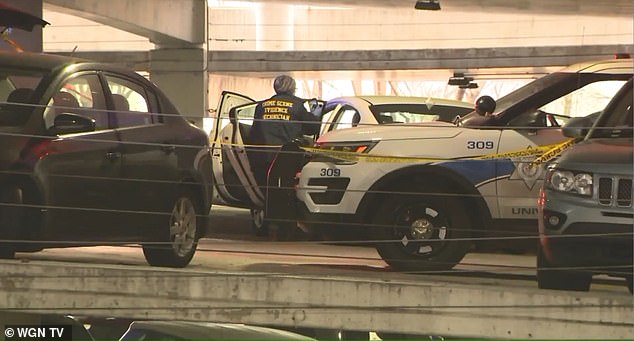 The medical examiner’s office ruled the girl’s death was a ‘homicide’ and that she died ‘as a result of strangulation’. 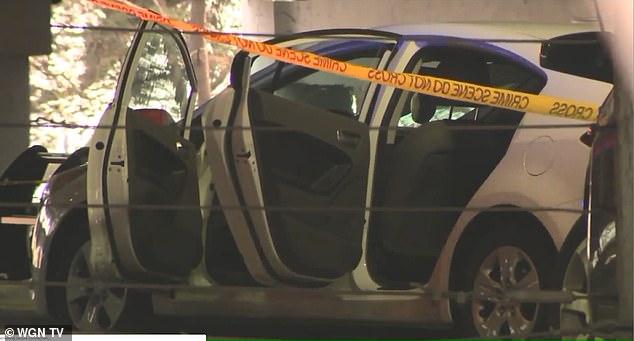 This car was seen on the site where 19-year-old Ruth George was found dead. Police cordoned off the vehicle and garage as officers continued their investigations into the death of the college student 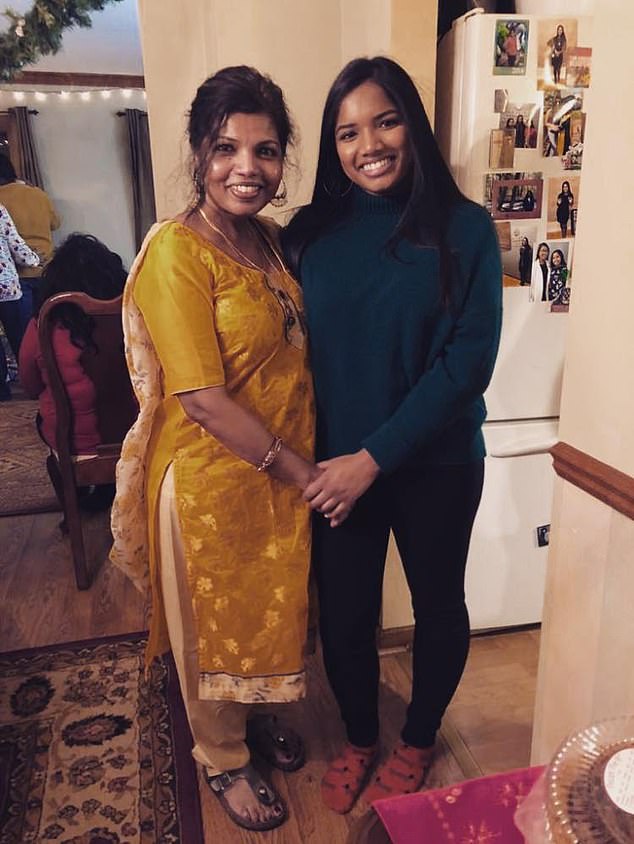 On one of the 19-year-old’s last photos shared publicly on her Facebook page, a smiling image of her with her mother on Boxing Day 2018, friends, family and even complete strangers are expressing their shock.

‘Oh Lord! no words can heal the pain for family.. so sorry for the loss.. Such a beautiful daughter and sister we have lost,’ writes one woman connected to the family.

Another, a stranger, expressed her condolences to the family as they deal with the tragic taking of George’s life.

‘I didn’t know you but my condolences to your family and I hope justice is served for the person or person who took u away,’ she wrote. 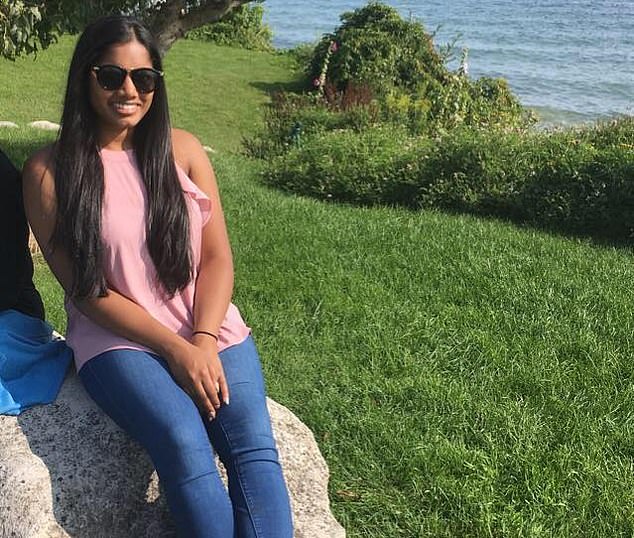 The student’s death has been ruled a homicide. The local medical examiner’s office has deemed her death was a result of injuries consistent with being strangled

Meanwhile in other emotional posts shared in publicly-available posts online other relatives and friends are sharing their grief.

One relative, described a ‘loving and wonderful daughter, sister and cousin’.

‘Dearest Ruthie baby,’ she wrote. ‘We miss you…just not able to believe you are no more…Rest in peace… we love you.’ 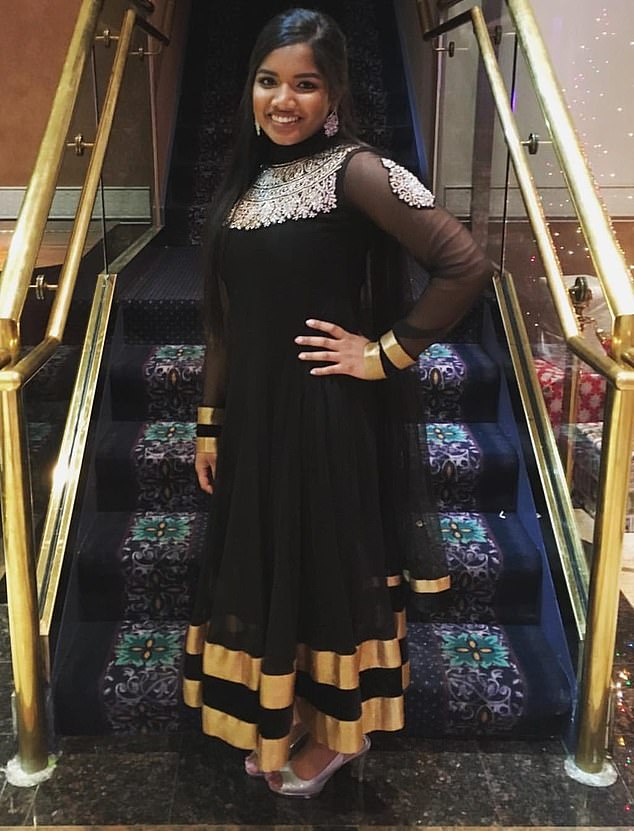 This image, taken from a relative’s public post paying tribute to the 19-year-old, shows the Ruth George dressed in a beautiful gown and sparkling jewels. Her family and local community are left reeling from the news she was found dead in her car on a university parking lot

University Chancellor Michael Amiridis said the local community was at a loss for words at the news of George’s death.

‘It is very difficult to find words that can express the sadness our entire community experiences today,’ said in a statement Saturday evening.

‘We offer our sincere condolences to the student’s family and friends and I know that all of us have them in our hearts as they struggle with this devastating loss.’ 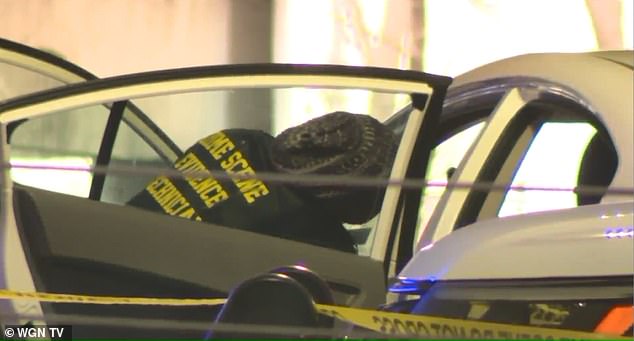