Man, 25, who fathered a child with a 15-year-old girl tried to bribe her with a car if she kept quiet after he found out she was pregnant

A man who fathered a child with a 15-year-old girl who he assaulted a number of times before trying to bribe her into keeping quiet has been jailed.

The Canberra man and the teenager started their relationship in October 2017 when he was 25 and it continued until April the following year when she fell pregnant.

The ACT Supreme Court heard the pair met when he sold drugs to her and her then-boyfriend before she left him and started a relationship with the offender.

The charges of assault were in relation to a number of incidents including when he punched her several times in the face after an argument in a car, leaving her with a black eye.

On a separate occasion, after she had fallen pregnant, he struck her in the stomach which caused her to hunch over in extreme pain, The Canberra Times reported.

When the girl told him she was pregnant he responded with ‘we gonna be a family’, despite already fathering two children with another women when he himself was 15.

Evidence tendered to the court also proved the man was aware of the girl’s age and had even been warned by friends that it was illegal.

Illicit photos and videos of himself and the underage girl were also found on the man’s mobile phone.

When the man learned she had sent one of the photos from his phone to hers he admonished her because it was ‘illegal’ and demanded she delete it.

Chief Justice Helen Murrell said the man’s crimes were opportunistic and would now have a lasting impact after the girl gave birth in January.

‘The victim’s lack of opposition to the sexual activity is not a mitigating factor. By virtue of age, any child lacks the capacity to give real consent,’ she said.

‘It is not correct to describe the relationship between the offender and [the victim] as predatory, but rather as opportunistic.

‘It involved the offender taking advantage of youth, to institute and maintain a highly inappropriate relationship, albeit one that, on the offender’s part, involved genuine fondness.’

The man was found guilty for the charges of maintaining a sexual relationship with a young person, assault and attempting to pervert the course of justice.

He was sentenced to four-and-a half years jail but he will be eligible for parole in August of 2020. 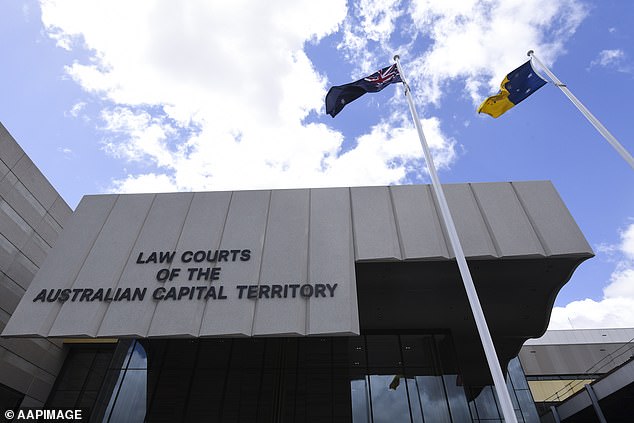 The man was found guilty for the charges of maintaining a sexual relationship with a young person, assault and attempting to pervert the course of justice in the ACT Supreme Court (pictured)