Outrage as orchardist illegally shoots and kills 19 rainbow lorikeets ‘because they were eating his apples’ before abusing wildlife officers who fined him $15,000

A man who illegally shot 19 rainbow lorikeets before abusing wildlife officers has been fined a hefty $15,000.

Brendon Edwards shot and killed the protected native birds on his Red Hill property, south of Melbourne, on April 24, 2018.

Wildlife officers and Victorian Police arrived at Edwards’ property and saw him carrying a loaded 12-gauge Miroku MK-70 shotgun over his shoulder.

Officers also saw Edwards’s wife close the back of a ute and prepare to drive away at the request of her husband.

Brendon Edwards shot and killed the protected native birds on his Red Hill property, south of Melbourne, on April 24, 2018 (pictured)

Officers searched the ute and were horrified to find 19 dead lorikeets in the back.

Edwards then abused the officers, calling them a ‘pissweak bunch of c***s and bludgers’, and told another officer to ‘take it to the street’, Herald Sun reported.

Under Section 13 of the Animal Welfare Act 1985, anyone who ill-treats an animal is guilty of an offence.

This Act is enforced by the RSPCA, departmental wardens, livestock animal health officers, biosecurity officers and the police.

Edwards appeared in Dromana Magistrates’ Court on March 29, where his lawyer said the birds were shot because they were attacking his apples.

He was charged with a range of offences, including destroying protected wildlife, using a gun for purpose of taking wildlife and verbally abusing authorised officers. 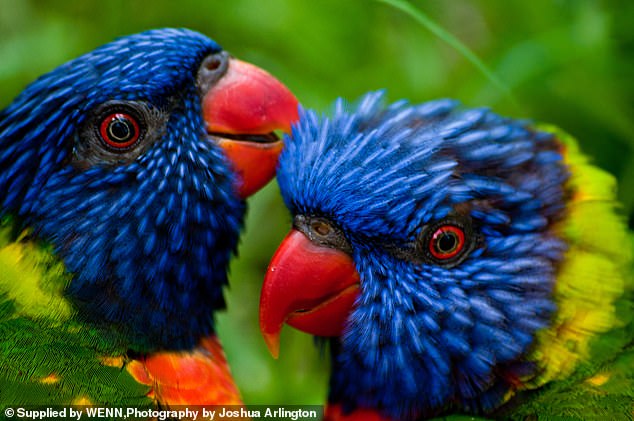 Social media users expressed their outrage and commended the wildlife officers for their great work.

‘Should also have been given 6 months behind bars with hard labour,’ one wrote.

‘Penalty isn’t sufficient. Killing birds that would eat out of your hand. Send the barstard (sic) to jail with a slippery bar of soap,’ another wrote.

‘Omg poor birds, why would you have a need to shoot them,’ someone else commented.

Anyone with information about the ill-treatment of animals is urged to report it to Crime Stoppers on 1800 333 000.