A man who traveled 200km to save his parents’ bushfire-threatened home has claimed he was fired from his job for taking time off work.

Beau Carroll, 34, went up to Bobin on the New South Wales mid-north coast last week to defend his parents’ property from the Rumba fire – which destroyed 20 homes in the small town.

Mr Carroll, who worked on a contract basis for Newcastle Council to regenerate bushland, was told by his employment agency he needed to work this past Monday.

But with the flames expected to reach his parents’ home on Tuesday, he realised it was too late to leave and texted his employer to let them know he wouldn’t be in Newcastle until at least the middle of the week.

‘I’d heard on the Friday night that a close family friend lost his house so we were prepared for the worst,’ Mr Carroll told ABC News.

The message sent by the contractor to the agency Forsythes Recruitment said he would be ‘out of mobile range’ while he was ‘cleaning up from fires’.

Mr Carroll, his father and a friend bravely fought off the flames and saved his home.

The short-term contractor was told on Thursday by the agency he did not have a shift on the Friday and to call them back.

He said he was then told by staff at Forsythes over the phone his contract had been terminated. 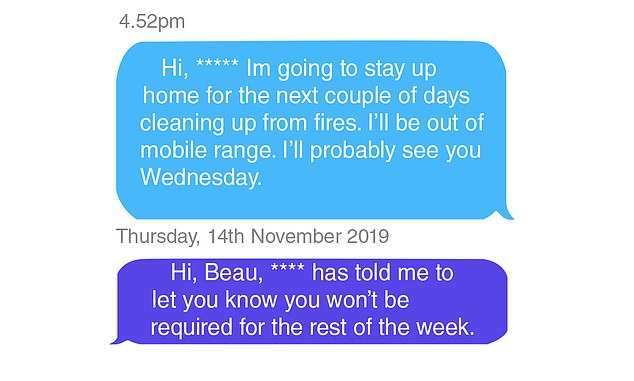 With the flames expected to reach his parents’ home on Tuesday, he realised it was too late to leave and texted his employer (message exchange pictured) to let them know he wouldn’t be in until at least the middle of the week

The reason they gave for dismissal, Mr Carroll claimed, was his previous issues with tardiness.

‘They basically said “bad luck” – they explained it was because of past punctuality problems, which I strenuously deny,’ he said.

‘It’s not want I wanted to come back to,’ he added to The Newcastle Herald.

‘I was always punctual. I was not late, ever, I had not received any disciplinary warnings. They basically sacked me because I hadn’t turned up that week.’ 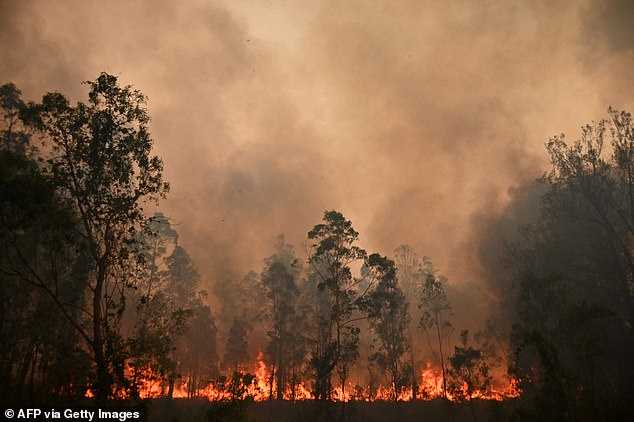 But although his family’s property was mostly saved apart from three sheds, the short-term contractor was told on Thursday by the agency he did not have a shift on the Friday and to call them back (fire pictured in Bobin on November 9)

The council has denied Mr Carroll’s claim he was let go because he took time off to fight the fires, saying the reasons for termination were well known to him and the agency.

‘City of Newcastle rejects Mr Carroll’s suggestion that his short-term contract ended due to him fighting bushfires,’ the council said in a statement said.

‘City of Newcastle offers its permanent staff up to five days additional paid leave annually if they participate in volunteer work during a natural disaster. This includes cases of approved leave for staff during the recent bushfires that Mr Carroll was involved in.’