A father-of-one narrowly escaped with his life and had to have most of his skin removed and replaced with grafts after contracting flesh-eating bacteria in his elbow.

Chris Gordon, 44, a special ed teacher in New Ulm, Minnesota, woke up in March 2015 with a softball-sized lump on his elbow.

He went straight to his doctor in the morning but he was told not to worry; that it was likely just some kind of inflammation, likely bursitis or cellulitis, and to sleep on it.

But within hours, he was drowsy and sick, and that evening he rushed to the ER, where doctors realized his situation was much more serious.

He was airlifted to the Mayo Clinic where he was diagnosed with necrotizing fasciitis, a bacterial infection that destroys skin, fat and tissues around the muscles.

Chris Gordon, pictured since his skin graft, urges people not to let anything get in their way of living. Since surviving a bacteria that is often lethal, he is living his life to the fullet 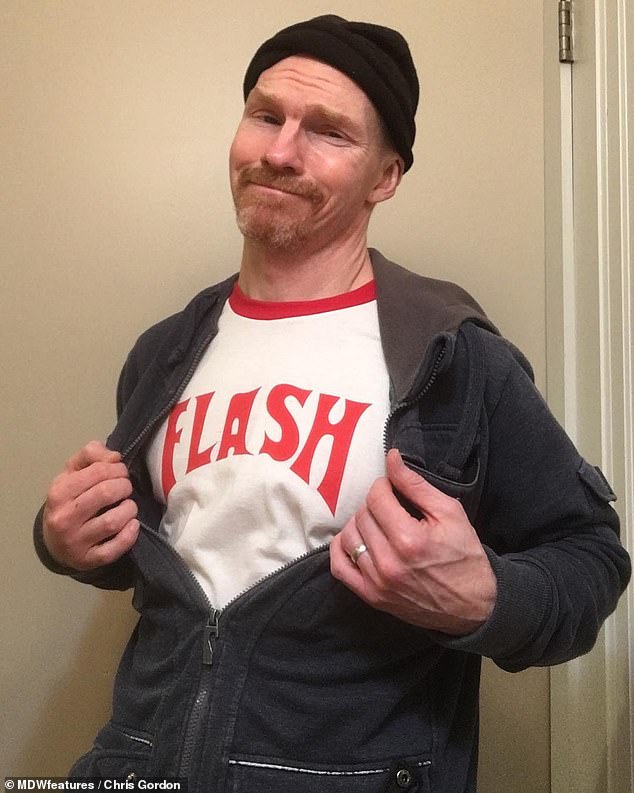 Gordon, a special ed teacher and a father in Minnesota, is now a black belt in Tae Kwon Do

‘Imagine a fire starting in the middle of a dry forest and the only way to stop it spreading is to keep ahead of it and conduct a controlled burn, and to do this you must remove trees before the fire could use them for fuel,’ Chris said.

‘Now imagine that the forest is your skin and the fire is the necrotizing fasciitis.’

Chris spent two weeks in the intensive care unit and six more on a regular ward where he was given a range of medications to help ease the pain and reduce blood clotting.

Chris had more than 10 doctors working on him and another team who worked with the plastic surgeon.

When he finally left the hospital after 65 days, he received inpatient and outpatient care at the hospital for another eight months. 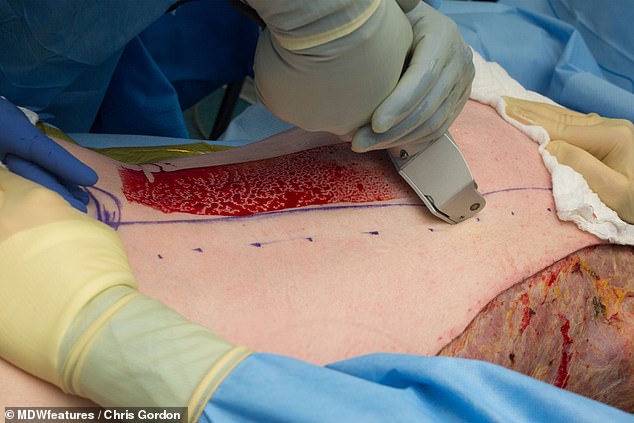 His ordeal began one morning in March 2015, when he woke up with a lump on his elbow 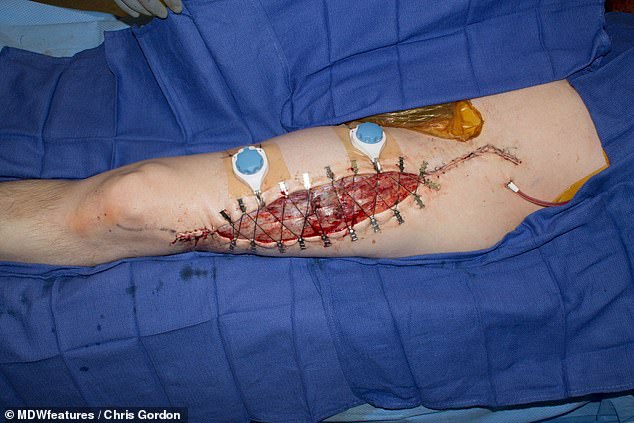 Gordon went to get it checked out and was assured it was nothing, but hours later ended up back in the hospital 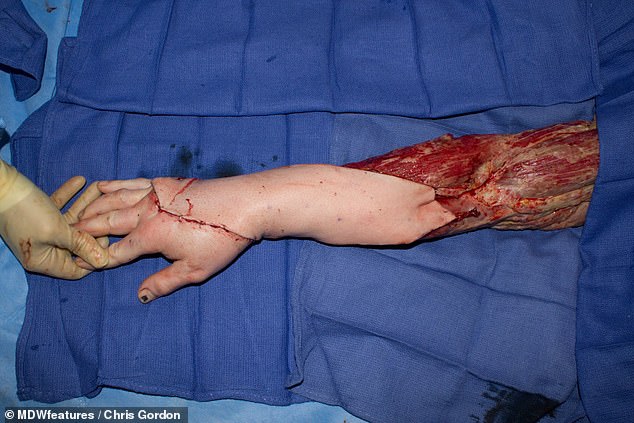 Doctors had to spend two months trying to chase the bacteria to remove it and stop it from spreading. Once they were done, they had to replace skin across his body 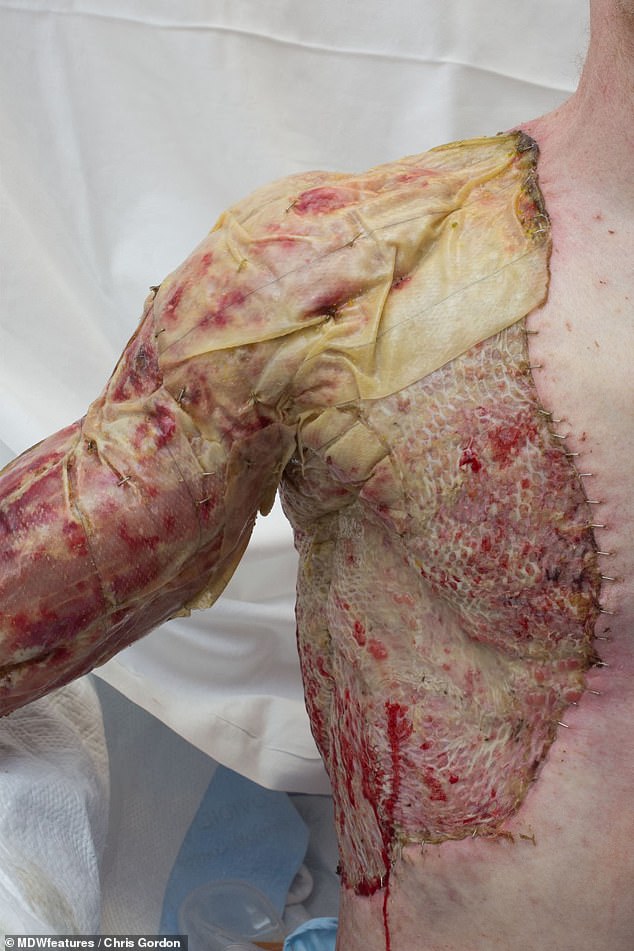 ‘Thankfully I didn’t need to go into isolation,’ said Chris.

‘Having been in the hospital for so long, I asked my surgeon if I could have a beer.

‘Later that same day my father-in-law Bill, who was also the Lutheran Chaplain, came with a can of beer and two plastic cups in a brown bag.

‘He went to double check with the nurses that I could drink and three minutes later the nurse came into my room with a written prescription for one beer a day.’

When he could finally leave the hospital, he was still given physical therapy as both an inpatient and outpatient for about eight months.

Since his experience Chris has taken exercise and sports to a whole new level.

He had already been running since 2002.

He practices Tae Kwon Do, a Korean martial art in which he has just completed his black belt test.

‘I am eternally grateful to God, my family, my friends and the excellent medical staff at Mayo Clinic. Thank you so much,’ he said.

‘I’ve been running since 2002 and I have also played soccer, boxed, water skied, and a few other sports.

‘This whole experience has motivated me to set many long-term physical fitness goals. I recently just took a test to earn a black belt in Tae Kwon Do.

‘I have also become an ‘acting’ fitness coach to my friends online. It’s nice as I like to help them reach their own goals as well.

‘If you’re alive you can truly thrive.

‘Do everything to the best of your ability and look for ways to help others around you do the same.’ 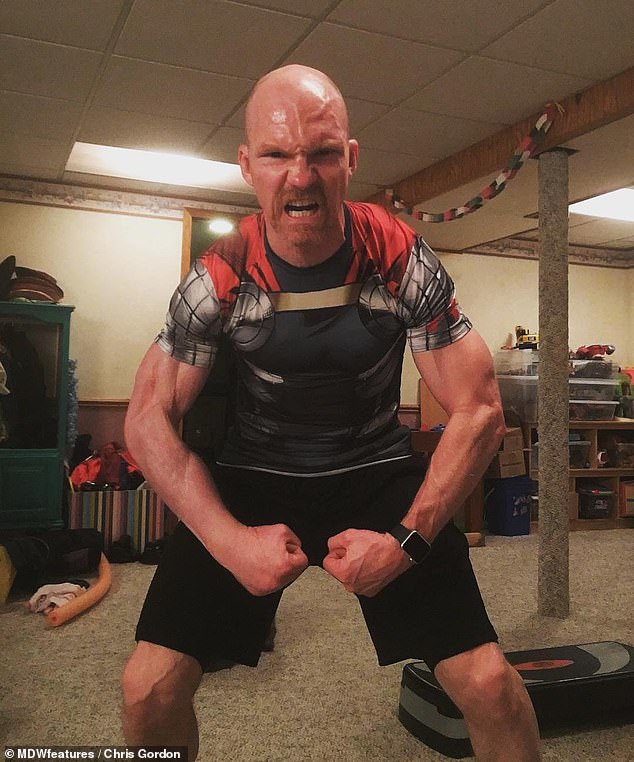 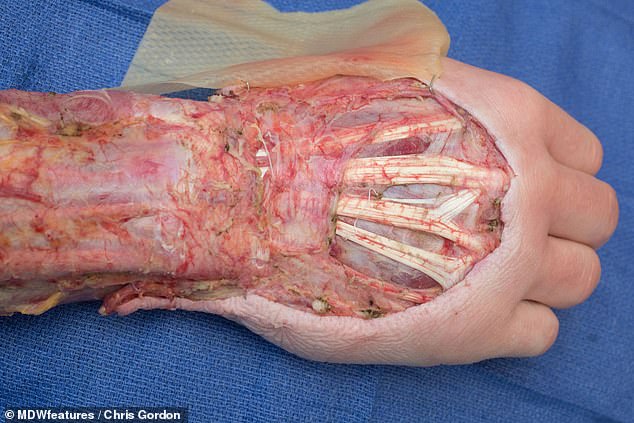 Chris had his skin removed right from his hand