The founder of a popular Manchester City fan website was jailed after waging ‘chilling’ campaigns of stalking against two contributors.

Stuart Marshall, 36, who set up the City Watch site from scratch, began flooding the men with messages which became more and more threatening and sinister.

When police officers raided Marshall’s home in Bury, several dozen indecent images and videos of young boys, aged between 11 and 16, were found on a pen drive.

Marshall admitted two counts of stalking, one charge of using unauthorised access to computer material to facilitate the commission of an offence, relating to the hacking, and possessing indecent images of children.

He put his head and his hands and burst into tears in the dock as he was jailed for two years and four months at Manchester’s Minshull Street Crown Court.

Marshall could be heard shouting ‘what are you laughing at’ at one of his victims in the public gallery as he was led away to serve his sentence.

Prosecutor Nicholas Flanagan said: ‘This defendant was the instigator of a website called City Watch. It was a website where he had a number of people working for him as volunteers.’

Both victims said after a while Marshall became more and more ‘intense’ and began contacting them several hundreds times a day at one point.

The messages included him at one point telling the men he would kill himself and that the victim ‘would have to stop him’.

Eventually both men decided to cut off contact as they felt their relationship with Marshall was becoming ‘inappropriate’ and ‘toxic.’

However, after telling him they were leaving the business, Marshall’s behaviour began to quickly ‘escalate’ and followed a ‘chilling pattern’ towards both.

Marshall continued to send Whatsapp and email messages – many of which contained threats to the men’s families and their girlfriends, the court was told.

One message to one victim ‘threatened to out him as a homophobe’, Mr Flanagan said. 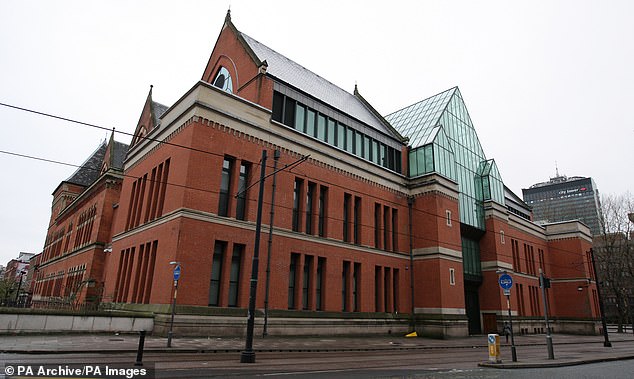 During the course of the stalking, which lasted around four months for one victim and around a year for the second, their social media accounts – including Facebook and LinkedIn – were hacked and in one case, their bank details obtained.

An advert was placed on a swinger’s website containing the address and phone numbers of one victim and his girlfriend, and unordered pizzas arrived at their home.

On one occasion a fake Twitter profile was set up in the name of the second victim and a post was sent which called for the stabbing of Liverpool fans – and also included a cruel reference to the Hillsborough disaster.

He was then ‘inundated’ with messages from furious Liverpool supporters in response, the court was told.

Marshall wasn’t directly responsible for each and every act described but had enlisted the help of others to aid him in the task of ‘harassing’ the pair, the prosecution said.

Both men called police in Spring last year, and when police searched Marshall’s home the pen drive containing the 40 indecent images and videos, 13 being of the most serious nature, were discovered.

Dan Gaskell, defending, said Marshall’s ‘mental state’, including an unnamed psychological disorder, ‘played a significant part in the commission of these offences.’

He said: ‘The defendant has accepted through his guilty plea responsibility and through co-operation with medical professionals a level of remorse.’

Mr Gaskell said his client’s offending was bound to have a ‘disastrous’ effect on his ability to run City Watch business, which has more than 150,000 followers on Twitter, but that he had employed others to keep it running due to restrictions on his use of computers and the internet.

However, the judge rejected pleas to suspend his sentence and Marshall put his head in his hands in the dock as he was told he would be sent straight to prison and would serve two years and four months.

Judge Angela Nield described the ‘deliberate and targeted’ harassment as ‘appalling’ and said it was a ‘sad’ that a man of Marshall’s ‘obvious intelligence and skill’ had ended up before the courts.

She said: ‘This was deliberate and intended to cause maximum distress to the victims. There was a high degree of planning and they were sophisticated.

‘The hacking of computers was a skilled process, the creation of false accounts, the manipulation of photos can only be achieved by someone with your professional knowledge.

‘I accept that the prosecution cannot show that each and every action was taken directly by you.

‘But I am sufficiently satisfied that the actions which were undertaken were undertaken at your instigation and you made it clear in intervening communications with the victims that you could stop this at any time, suggesting a measure of control.’

Detective Constable Jim Lyons of GMP’s Cybercrime Unit, said: ‘Hiding behind his computer, Marshall naively thought he would never get caught but, thanks to the men who bravely contacted us to put a stop to his incessant stalking, we can now safely say he’ll be behind bars for some time.

‘Those who use anonymous profiles on the web to carry out their prolific and disturbing offending need to be stopped and there’s only one way we can do that – with your help.

‘People like Marshall take away the voices of victims who are unable to speak up against his offending but today, on their behalf, we’re here to say you are now the one who has been silenced.’