‘You can abuse me after!’: Smiling Manchester United boss Ole Gunnar Solskjaer fires back at fan interrupting his post-match interview after relieved Norwegian’s side won at Tottenham

Manchester United boss Ole Gunnar Solskjaer jokingly told a fan ‘you can abuse me after’ in a witty post-match comment following their victory at Tottenham on Saturday.

The Norwegian boss was under enormous pressure following give losses in nine games in all competitions, the latest of which came in humiliating fashion in a 5-0 reverse against Liverpool last weekend.

But the United boss saw his side respond with a 3-0 victory in north London, with veterans Cristiano Ronaldo and Edinson Cavani as well as substitute Marcus Rashford all netting. 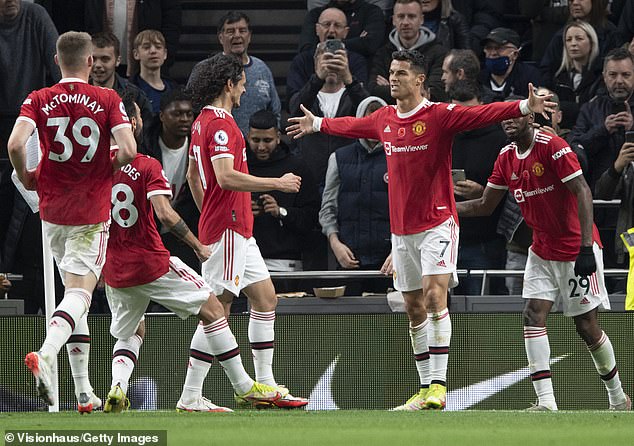 Solskjaer had a beaming smile on his face as he conducted his post-match media duties, but the start of his interview with MUTV began with fans shouting at him.

Asked how the success of his gameplan at the Tottenham Hotspur Stadium made him feel, he started his answer before saying to the supporter with a smile on his face: ‘Can I do this interview and then you can abuse me after, eh?!’

Then continuing with his answer, he added: ‘The boys have been really good. They have worked really hard. Ever since we came in on Tuesday morning we had a plan. We sat down with the players and made sure we are all buying into this plan.

‘It is a little bit of a different approach, but we have had a difficult week. They stuck at it and worked really, really hard to get this result.’ 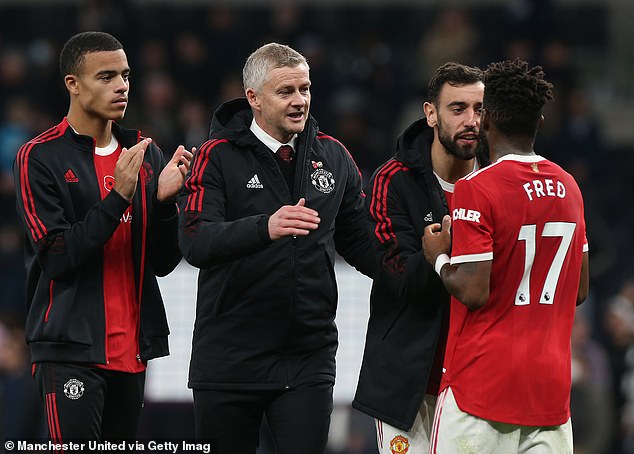 Solskjaer expanded on the ‘difficult week’ with BBC Sport, insisting he had stayed away from all the speculation.

‘The most important thing for the fans and me and the players is that we connect together,’ he said.

‘It has been a difficult week for the players, the club, the fans, for me. I’ve stayed away from most of the noise. But you know what is happening out there and you know you have to put a performance up.

‘Every time you lose a game it is the worst feeling in the world as a coach or manager. We needed the whole week to work on this performance.’

Solskjaer also hailed Ronaldo and Cavani, with the two veterans starting upfront together for the first time as Solskjaer fielded his oldest United XI to date before both getting on the scoresheet.

‘I’ve been more or less three years as a manager and Tuesday’s training performance by Cavani was probably the best I’ve seen from anybody,’ he said.

‘Ronaldo and Cavani play well together. They’ve got loads of respect for each other. The quality they put in is second to none.

‘They were playing for the club no matter what. It’s about improving as a group. If one of them doesn’t give what they have for Man United they won’t get to play.’

When asked whether he was feeling especially relieved to finally have a victory back against his name, Solskjaer remained pragmatic.

‘You know you’re under pressure from day one when you walk in here,’ he said. 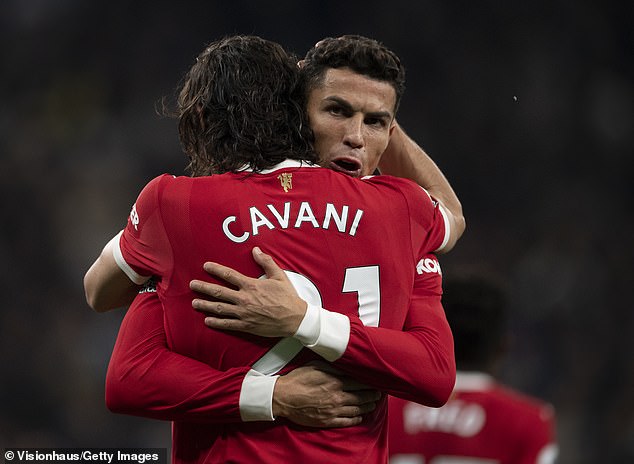 ‘This week has been a difficult one for the players, fans haven’t been happy. This is one game, it’s the next one now, Atalanta. You are where you are and you have the responsibility that you have and you have to enjoy it.

‘It would have been a different interview and atmosphere [if we had lost] but that’s football. When you win everyone’s up. You’ve got to look forward to the next game.

‘We have got experience together, Cristiano and Edi. We got more control and probably got a man of the match performance from [Scott] McTominay.’