‘I’m sick of hearing about “quick fix” Mandzukic… get Haaland in!’: Manchester United fans beg club to sign Norwegian star after ANOTHER brace took his season tally to 20 goals in just 13 appearances for RB Salzburg

By Michael Boniface For Mailonline

The 19-year-old has caught the eye with sparkling displays on the European stage and the Austrian Bundesliga, where he has scored 11 goals in only nine appearances.

He’s also notched five league assists and Manchester United fans have taken to Twitter to implore the Old Trafford hierarchy to splash the cash on the whizzkid – rather than Mario Mandzukic.

Man Utd fans have joined forces on Twitter to call on the immediate signing of Haaland, 19

@ChrisFletch_UK posted: Haaland would be my choice for a new striker. I’m sick of hearing about “quick fix” Mandzukic. Get Haaland in as part of a long term plan FFS before his value goes crazy high…’

@OrohitO was excited about how Haaland could slot into the Manchester United attack: ‘I’d LOVE Haaland at @ManUtd. Proper potential player. Imagine him, Martial, Rashford and James.’

Other Manchester United fans joined the call for Haaland to turn things around at Old Trafford.

@GlazerOutPoland tweeted: ‘Go for Haaland. Stay away from pensioners like Mandzukic #GlazersOut’

@Jesus73930618 said: ‘Buy Erling Haaland and Mandzukic. Rashford isn’t good enough even to be a sub.’

Haaland’s brace against Napoli took him to six goals from his first three games in the Champions League – form which has whet the appetite of the Man Utd faithful.

@theriazosman even instructed Man Utd assistant Mike Phelan to get involved in the transfer. He said: Erling #Haaland just cannot stop scoring. This man is a goal machine! I hope you are seeing this @Mike_Phelan_1 @ManUtd. SIGN HIM UP!!’

@DonJuanFikri thought Haaland would fill a Romelu Lukaku-shaped hole up top, tweeting: ‘I seriously think the board should go after Haaland this summer. Exciting prospect to replace Lukaku as the lead striker for @ManUtd’ 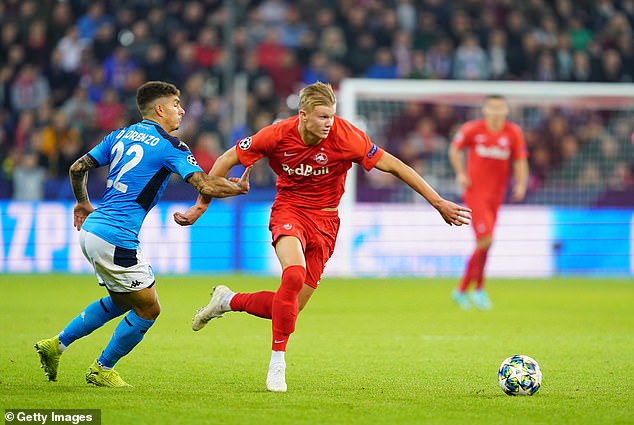