Manchester United are set to be boosted by the return of Phil Jones for Tottenham’s Premier League visit on Saturday.

Jones limped off during last weekend’s shock 2-1 defeat at Huddersfield last weekend when the game was goalless.

The England defender was not expected to travel to the Carabao Cup tie at Swansea on Tuesday night, but in the event he was an unused substitute as Jesse Lingard’s first United brace secured a comfortable 2-0 victory. 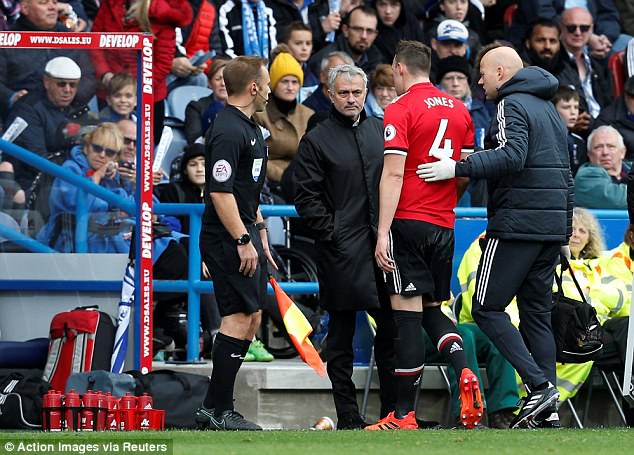 And United boss Jose Mourinho provided a positive update on Jones’ fitness after the holders had booked their place in the quarter-finals.

‘There were no injuries either, so it is a good day,’ Mourinho told Sky Sports before choosing not to attend the customary post-match press conference.

‘I believe that Phil Jones will be fit for Saturday against Tottenham, but apart from that I have no news.’

Jones’ availability against Spurs will come as a huge boost for second-placed United, who are only above Mauricio Pochettino’s side on goal difference.

The 25-year-old has been a cornerstone of United’s defence this season and, with centre-back partner Eric Bailly currently out injured, his presence will be vital with £31million summer signing Victor Lindelof still finding his feet at Old Trafford.

Lindelof played alongside Chris Smalling and teenager Axel Tuanzebe in a three-man defence at Swansea, but the Sweden international once again showed signs of nerves.

‘(Sergio) Romero and Smalling gave us good stability,’ Mourinho said. ‘We were in the game from the first minutes, pressing and forcing things, the attitude was good. 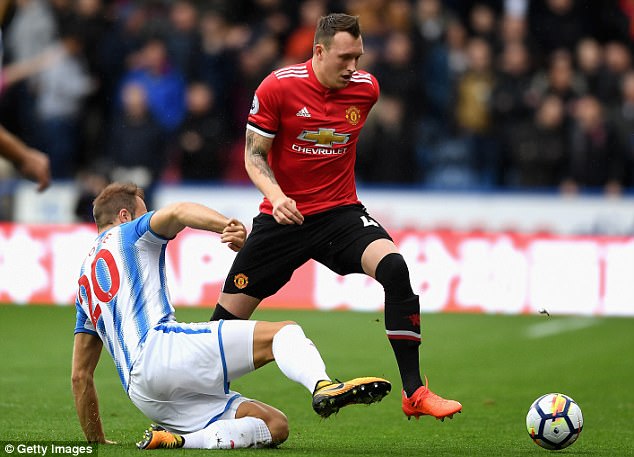 ‘Scott McTominay did very well, he was strong in the midfield. Tuanzebe started maybe a little shaky, but then we got stability and he came into it.’

For Swansea, this was a fifth home defeat of the season and there was further concern when Martin Olsson limped off in the first half with what appeared to be a hamstring injury.

Olsson, the only specialist senior left back at the club, is set to undergo a scan on Wednesday and the fear is that he could be sidelined for some time. 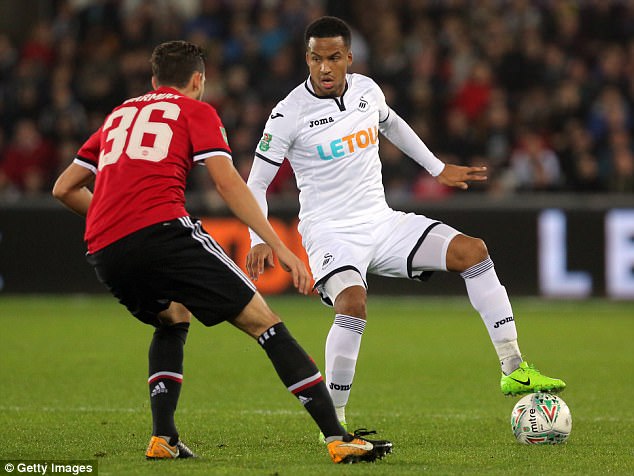 Swansea City saw Martin Olsson limp off, leaving them without a senior left back in their squad

‘If he’s not OK for the weekend, then we have the option of playing (Kyle) Naughton there or (Sam) Clucas can fit in that position,’ Swansea head coach Paul Clement said.

‘We actually played better than we have been recently but Manchester United deserved to win the game, no question about that.

‘They had the extra bit of quality and, from our point of view, we just have to believe a good result and good performance is around the corner.

‘We have to show determination to get through this difficult time that we’re having.’