Top secret! Manchester United launch operation to foil anti-Glazer protesters as they look to ensure pre-match plans for re-arranged Liverpool clash are not leaked – with players sworn to secrecy and some staff deliberately kept out the loop

By Simon Jones and Chris Wheeler for the Daily Mail

Manchester United have mounted a top-secret operation to stop anti-Glazer protesters from disrupting their plans for Thursday’s re-arranged clash with Liverpool at Old Trafford.

United have adopted a siege mentality, with players sworn to secrecy over their preparations and staff given information on a need-to-know basis to avoid leaks and limit the security threat.

The club are trying to prevent a repeat of the scenes that caused the fixture to be postponed 11 days ago when protesters blocked the team from leaving the Lowry Hotel and hundreds more clashed with police at Old Trafford.

United are aware of the ongoing threat and have kept their plans a closely-guarded secret since then.

Last week, the departure time from Carrington for the Europa League semi-final against Roma in Italy was kept under wraps until the last minute amid rumours that fans might try to sabotage the team bus en route to Manchester Airport.

The players stayed at home before Tuesday’s game against Leicester and were only told on Monday night to meet at the training ground before travelling to the stadium.

Sportsmail understands that the plans are likely to change again on Thursday night against Liverpool. There will be tight security to prevent further disturbances after it became the first Premier League fixture to be called off due to a protest. 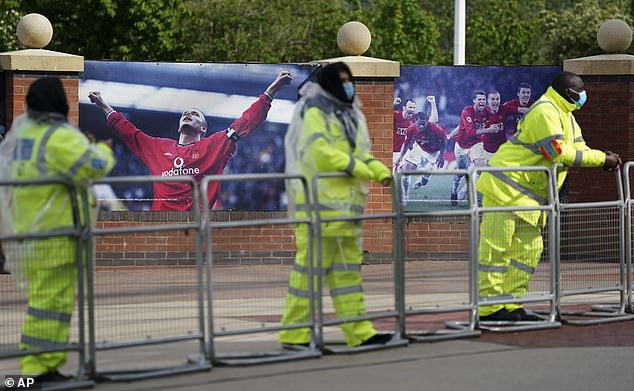 United have built a 10-foot wall and installed steel barriers to protect the most vulnerable areas of Old Trafford, including the corner of the stadium where fans twice broke in and got on to the pitch.

There was an increased police presence and more stewards on duty when United played Leicester, although the game against rivals Liverpool has always been considered a greater risk.

Both clubs have American owners who were involved in the collapsed European Super League. The fiasco re-ignited anti-Glazer sentiment at United and led to club security being ramped up. 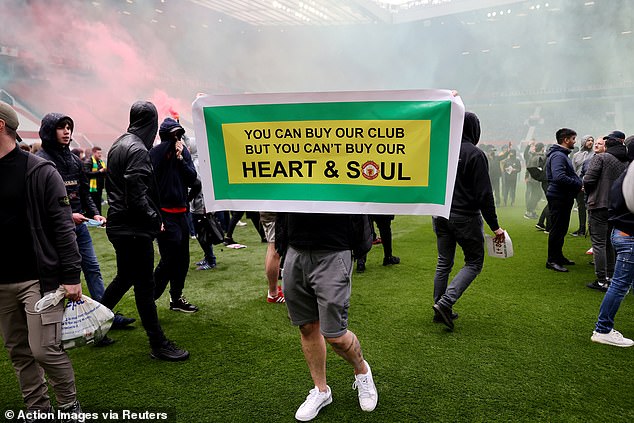 United fans stormed the pitch ahead of the fixture 11 days ago, leading to a postponement

The number of stewards at Carrington has increased significantly from 15 to around 50 since a mob with banners broke in to protest last month.

A new barrier was installed last week, with some staff now comparing the training complex to Fort Knox.

Although protesters claimed the Liverpool postponement as a victory over the Glazers, it led to United being made to play four times in eight days and defeat to Leicester confirmed Manchester City as Premier League champions.