A week before she gave birth to her first child, she’d shared the heartbreaking news that her beloved dog Jackson had to have emergency surgery for ‘a mass’ in his abdomen.

But on Wednesday, Mandy Moore happily announced that the mutt is recovering well and is cancer free.

‘His tumor was benign,’ Mandy posted to her Instagram Story along with a snap of Jackson lying on his bed with his shaved belly visible.

Good news: Mandy Moore happily shared with fans Wednesday that her beloved dog Jackson has gotten a clean bill of health after undergoing surgeryto remove ‘a mass’ from his abdomen 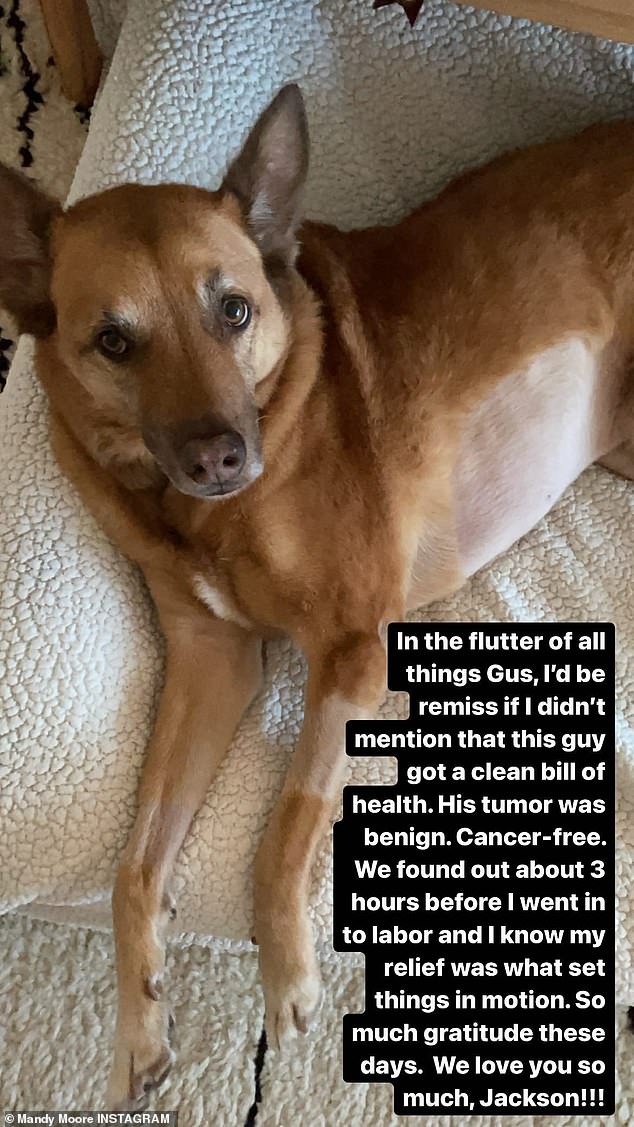 Recovering well: ‘His tumor was benign,’ Mandy posted to her Instagram Story along with a snap of Jackson lying on his bed with his shaved belly visible

She revealed she and husband Taylor Goldsmith had learned of the dog’s clean bill of health ‘about three hours’ before she went into labor to deliver their son Gus.

‘So much gratitude these days,’ the This Is Us star wrote. ‘We love you so much, Jackson!!!’

She also apologized to her fans for not sharing the good news about Jackson sooner but naturally she has been completely absorbed with being a new mom.

On Saturday, Mandy shared another photo of newborn Gus and in the caption,s he wrote: ‘One week earthside.  The best week ever.’ 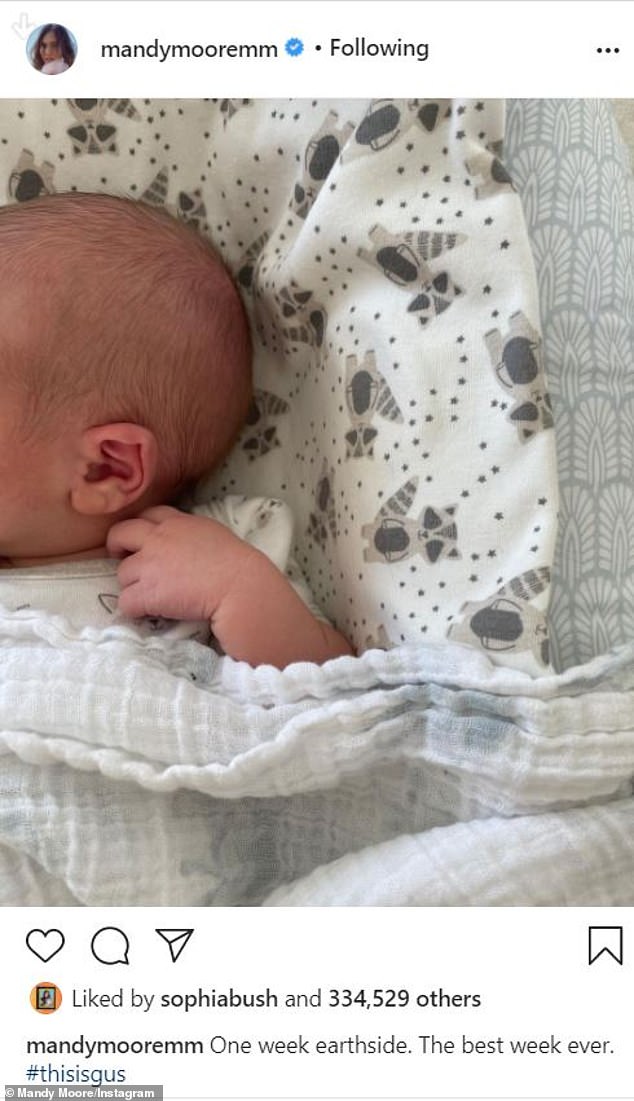 ‘So much gratitude’: Jackson had undergone surgery a week before the actress delivered her first child and on Saturday, she’d shared a new photo of her infant son Gus 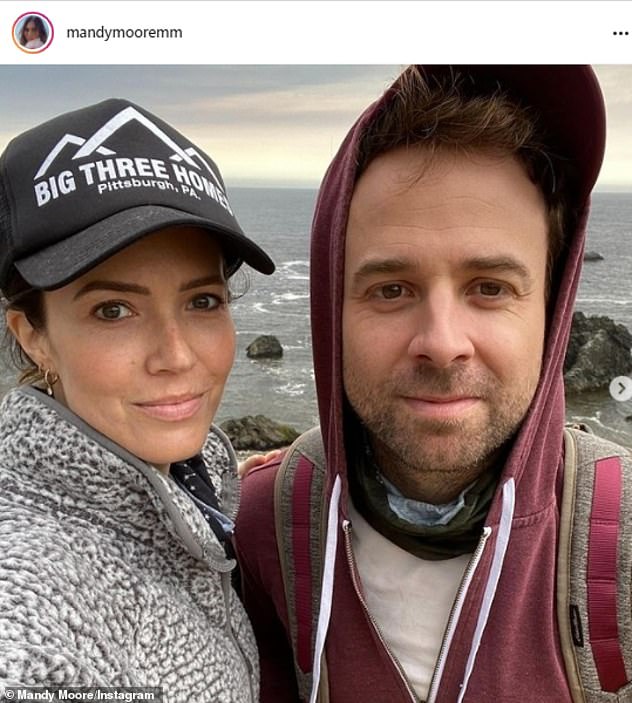 New parents: The This Is Us star shares her son with musician husband Taylor Goldsmith, 35, whom she married in 2018 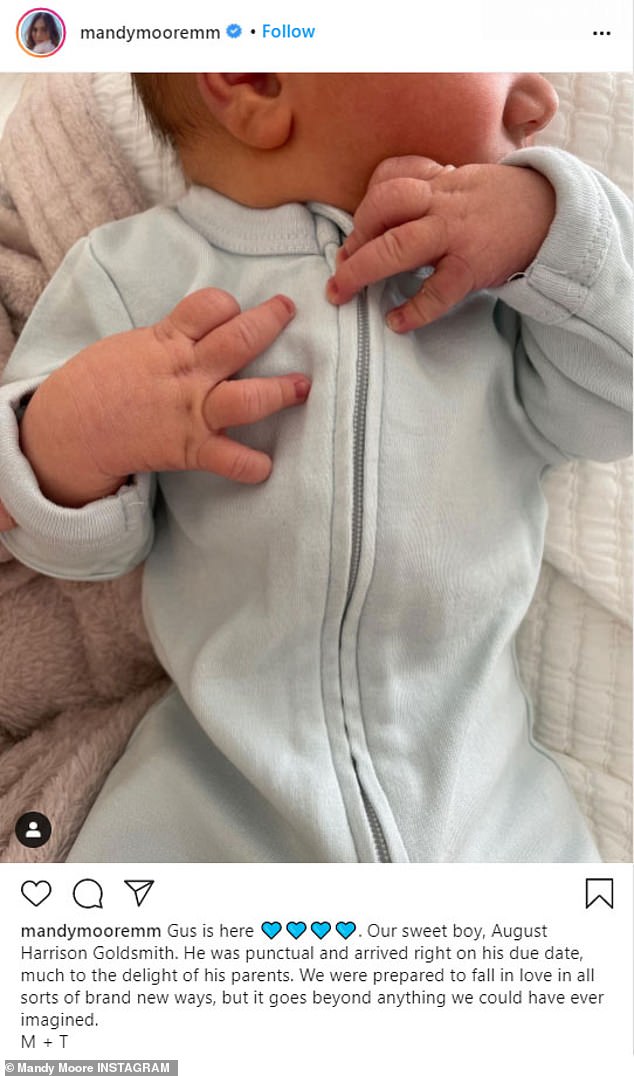 ‘Gus is here’: Mandy, who had been documenting her pregnancy journey on Instagram, introduced August Harrison to the world on February 23, a few days after his birth

The actress and singer, 36, had introduced the world to her baby boy on Tuesday February 23.

And the next day, she posted again to her Instagram to explain why she and Taylor had chosen the name August for him.

She shared a sweet snap of the infant sleeping under a gray blanket emblazoned with his name August sewn out of pieces of different cloth.

‘It was last August when @taylordawesgoldsmith and I found out we were having a boy (it’s also Taylor’s birth month) and we always loved the name… so it was settled very early on in our book,’ Mandy said.

‘Then for our anniversary in November, T gifted me with this blanket with the “A” (for Amanda) made from extra material from my wedding dress and “T” (for Taylor) from his wedding shirt. Felt like a very fitting amalgamation of our whole story.’

She added: ‘I can’t wait to pass this on to our sweet August one day.’

Mandy and Taylor, a musician, tied the knot in November 2018 after three years together. Cute: The actress explained why they’d chosen the name August for their son and showed off  a blanket made from pieces of her wedding dress that her husband had had made