A ‘cowardly’ driver who mowed down a roadworker and left him to die after frantically calling a friend to pick him up is still on the run from police.

Timmy Raikei, 44, was killed and his workmate severely injured when a red Holden Commodore struck them in Melbourne about 7.15am on Tuesday .

The father of a two-year-old girl died at the scene on Hall Road in Carrum Downs and his 38-year-old colleague from Traralgon is in hospital with life-threatening injuries.

Detective Acting Senior Sargeant Jared Dwyer confirmed police were still hunting for the driver who they described as a ‘coward’.

The man was seen leaving the area of the crash in a black hoodie before making a phone call and getting into a black Hyundai SUV with fake number plates.

Timmy Raikei, 44, was killed and his workmate severely injured when a red Holden Commodore struck them in Melbourne about 7.15am on Tuesday 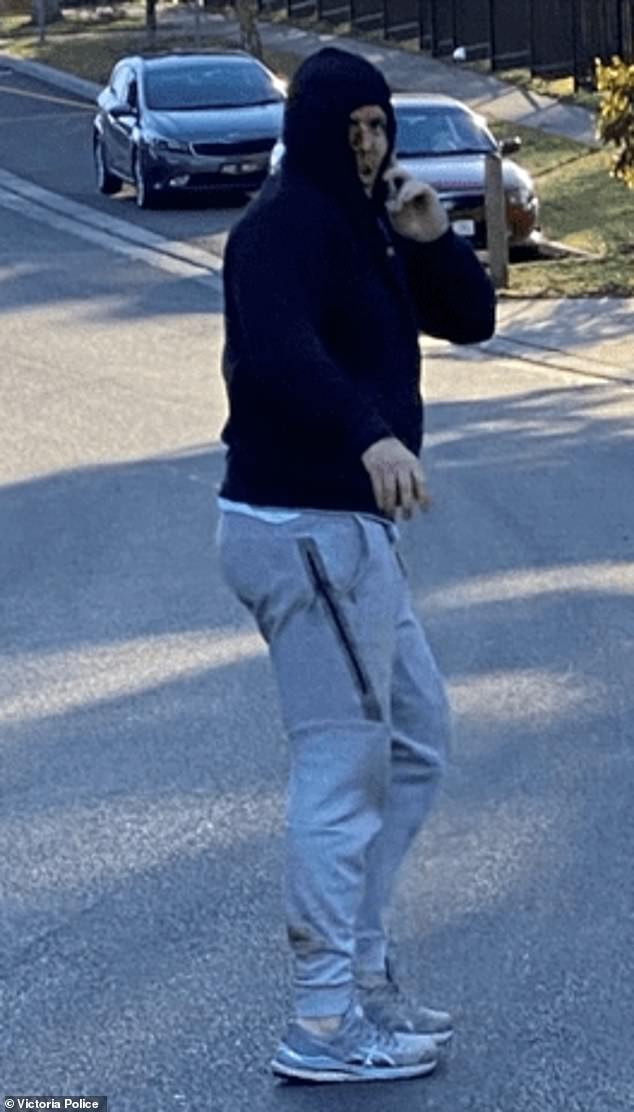 ‘The driver has just got out, looked directly at the two victims and then run off,’ Detective Acting Senior Sergeant Jarrod Dwyer told reporters.

‘It is just a callous, cold act. The act of a coward.’

Tributes poured in for Mr Raikei on social media from friends and family saying his death is ‘absolutely devastating’.

‘I’m gutted. Timmy, we were only just speaking last week. This is the worst news and I’m so sad I can’t get to Melbourne to say our goodbyes,’ one woman wrote.

‘I thank you for always checking up on me and the kids, making sure we are doing OK. We love you and sending lots of love to your family.’

A relative of the 44-year-old called him ‘the true definition of an uncle’ and thanked the man for supporting her family.

‘All the memories from when we were little, all the outings, all the love you gave me and my son, gonna miss you so much,’ the woman wrote. 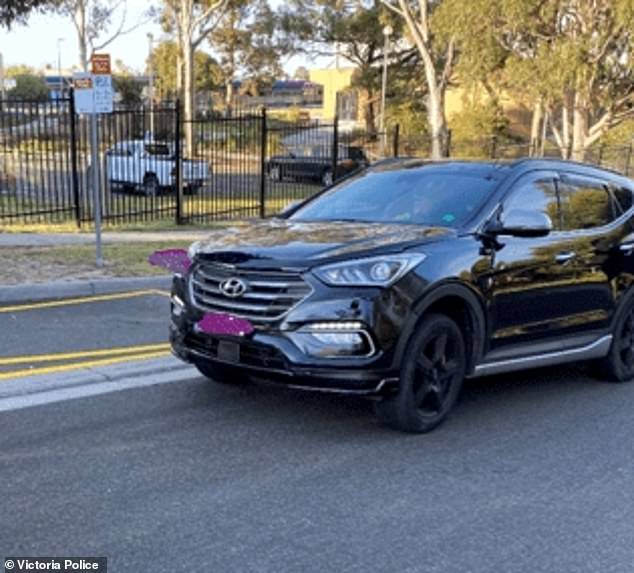 The driver of the red Commodore escaped in a black Hyundai SUV, driven by another man (above), who police are also searching for

Another woman took aim at the driver responsible, saying the police will bring them to justice

‘They will find these assholes that took you from your family and friends,’ a woman said.

‘Every person has the right to go to work and then come home safe to their family.’

A colleague of Mr Raikei, who works at Altus Traffic, told the Herald Sun the team was distraught with the news of his death.

‘We’re reeling over the fact we’ve lost him. People were so visibly distressed during the meeting that they needed to leave,’ they said.

Police are searching for the black Hyundai SUV that picked up the driver nearby and then drove towards officers when they tried to intercept it.

Authorities say the Commodore driver did not slow down ‘at all’ as they approached the 40km/h roadworks zone.

‘We’re pulling out all stops and we will find these people,’ Sergeant Dwyer said.

‘Hand yourselves in… You will be found.’ 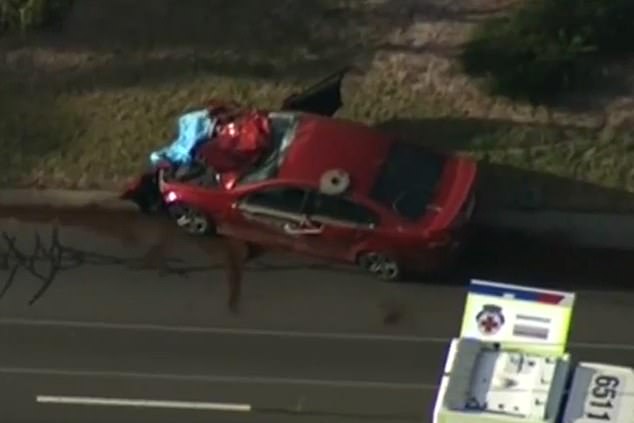 The tragic incident at Carrum Downs in Melbourne’s south-east occurred around 7.15am when the driver of a red Holden struck a group of workers on Hall Road, near the intersection of Lats Avenue 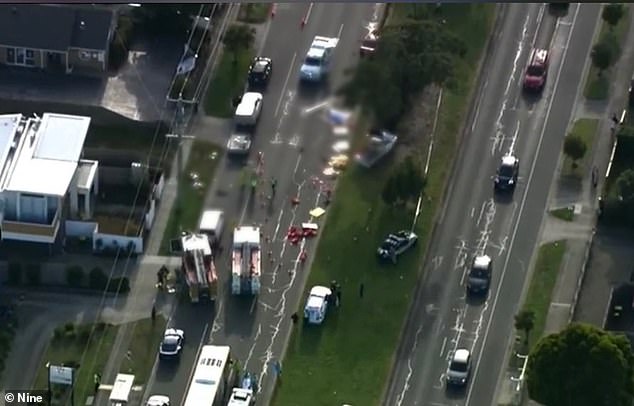 Investigators have made contact with the owner of the car, who is co-operating with police, to determine how the driver got behind the wheel.

They also released photos of two men, believed to be the drivers of the red Commodore and the black SUV.

‘We’ve had a number of reports in… and nominated a number of people but investigators are still going through that information,’ Sergeant Dwyer said.

‘At the last second he appears to have made an attempt to veer to the left to avoid the collision but it was just far too late and he was travelling far too fast.’

He said that despite a 40km/h speed limit due to the roadworks, it appeared the Commodore driver was moving at ‘excessive speed’.

‘Eyewitness accounts indicate that he was travelling at speed in the right-hand lane and at the last moment he made an attempt to avoid colliding with the ute and the road workers by veering left at the very last second but it was too late.’

The deceased, a 44-year-old man from Bayswater, was wedged between the ute and the red Commodore.

Sergeant Dwyer said eyewitnesses reported the driver got out of the car and looked at the victims before running off.

‘It is just a callous, cold act. The act of a coward.’

The driver of the vehicle fled the scene on foot but was chased and photographed by a member of the public who came to the aid of the road workers. 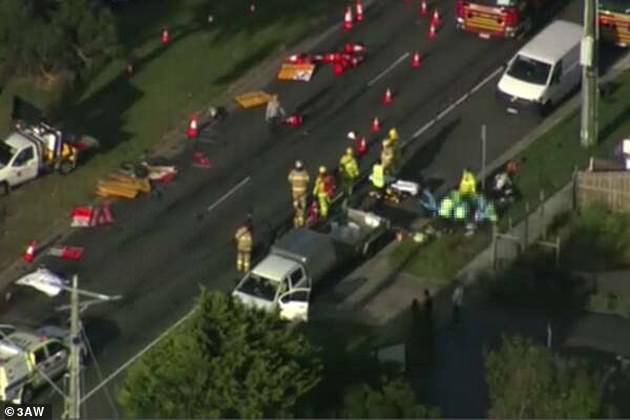 Police said the SUV was then discovered around 7.45am in nearby Bollarto Road, south-east of the original collision scene.

‘At that point police attempted to intercept and the black SUV has driven at the police members and they were unable to engage further pursuit at that point.’

Police said the registered owner of the Holden Commodore was cooperating with investigators and it was not known how the driver came to be in possession of the car.

Victoria Police released a statement saying a search for the offender had been launched.

He is believed to be Caucasian in appearance and aged in his 30s.

Another witness, Rick, told 3AW in Melbourne that two people working on the median strip were struck.

‘They were either council workers or arborists and they’d put their cones out and the car had gone though them and into the back of the truck,’ he told Neil Mitchell.

‘Someone … was helping one of the arborists across to the nature strip and he looked in a pretty bad way, but the other poor fella … he was deceased.

‘It was pretty hectic, everyone was pretty much in shock seeing that first thing in the morning.’

Rick said cars in the area were travelling about 60km/h at the time as they approached a roundabout. 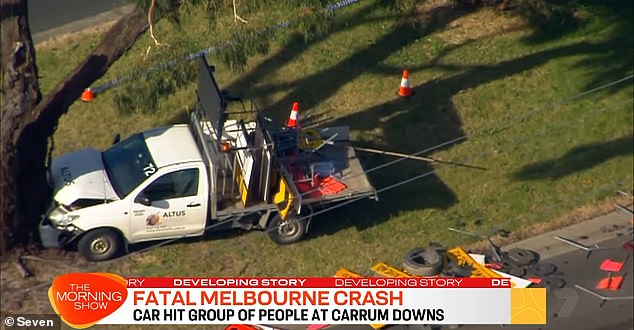 One witness, Rick, told 3AW in Melbourne that two people working on the median strip were struck. ‘They’d put their cones out and the car had gone though them and into the back of the truck,’ he told host Neil Mitchell

‘You’re also driving straight into an easterly sun and the sun is straight in your eyes,’ he told Mitchell.

‘I said to my wife when I got home, and I was pretty shaken up, this poor guy, he probably kissed his wife and kids goodbye as he left home and suddenly, you’re not home.’

Major Collision Investigation Unit detectives are investigating at the scene of the incident.

Hall Road was earlier closed between Cadles Road and Rowellyn Avenue as a result of the incident.

Police appealed to anyone who witnessed the collision or who has dashcam footage to contact Crime Stoppers on 1800 333 000.