‘Manly’ men with typically masculine traits may be better fathers, a new study has claimed.

Researchers from the Ohio State University found that characteristics such as competitiveness and adventurousness were linked to being better fathers to infants.

While these traits are often seen as old-fashioned male stereotypes, the researchers say that they can result in more positive parenting behaviours.

Professor Sarah Schoppe-Sullivan, who led the study, said: ‘If fathers can preserve the best of these stereotypically masculine characteristics, without the negatives like hostile sexism, that would be good for families.’

The typically masculine traits linked to better parenting skills were:

In the study, the researchers analysed highly educated men in dual-earner couples to see whether having typically masculine traits improved their parenting skills.

‘They may be in the midst of transforming fatherhood.’

The men completed questionnaires during the third trimester of their partner’s pregnancy, asking them to rate themselves on a four-point scale on seven typically masculine characteristics – competitive, daring, adventurous, dominant, aggressive, courageous and standing up to pressure.

The men were also asked how much they agreed with 11 statements including ‘feminists are making unreasonable demands of men’ to assess a negative masculine trait – hostile sexism.

Meanwhile, to assess their nurturing father role beliefs, the men were asked to rate how much they agreed with nine statements, including ‘Men should share child care such as bathing, feeding and dressing the child.’ 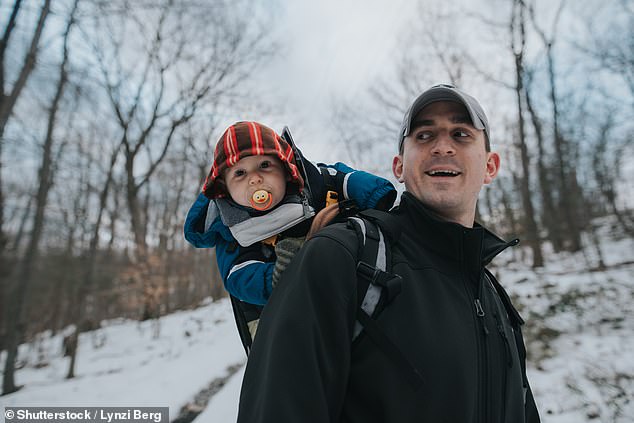 The results revealed that the more men said they fit with the stereotypical definition of ‘real men’, the more they were rated as good parents (stock image)

Finally, the men were also asked whether they thought men or women should provide the majority of the income for the family.

Nine months after the child was born, the researchers watched the fathers interact with their babies, both by themselves and with the mother.

Each father was rated on their positive parenting behaviour, and on how well they co-parented alongside the mother.

The results revealed that the more men said they fit with the stereotypical definition of ‘real men’, the more they were rated as good parents.

However, those who showed high levels of hostile sexism were found to have worse parenting skills.

Unsurprisingly, men who believed they should have a nurturing father role were also found to be better co-parents.

‘The fathers who see themselves as competitive and adventurous and the other masculine traits tended to be really engaged with their kids. They were not checked out,’ Professor Schoppe-Sullivan said.

While the reason for the link remains unclear, the researchers suggest that men who use traditionally masculine characteristics at work may also be trying to find ways to apply them to their ‘jobs’ as parents.

Professor Schoppe-Sullivan added: ‘These dads may be saying that being a father is an important job, too, and I’m going to use the same traits that help me succeed at work to make me a successful father.’

The researchers highlight that the fathers in the sample were highly educated and had partners who also worked, and the findings may not apply to all fathers.

Parents who are overprotective are sometimes referred to as ‘helicopter parents’.

They earned this stereotype for being perceived as relentlessly hovering over their children, trying to micro-manage their affairs.

The first use of the term is widely attributed to Dr Haim Ginott’s 1969 book Parents & Teenagers.

In it, teens said their parents would hover over them like a helicopter.

The term became popular enough to become a dictionary entry in 2011.

Helicopter parents pay extremely close attention to their children to try to protect them from failure, rejection and injury.

They want ‘happy’ children and often believe that teachers should pay attention to their children in the same overprotective way.

This approach has sparked controversy, with some experts arguing that in order for children to become well adjusted, they need to experience a full range of emotions.

The ‘helicopter’ parent rushes in to help rather than allowing their child to have a go at managing a challenging situation themselves.

Some experts say that this can lead to children who are unable to cope with even minor issues, as they are never given the opportunity to fail and then learn from their mistakes.

However, some experts suggest that such ‘pushy’ parenting may provide children with benefits in later life.

Among them is Dr Matthias Doepke, a professor of economics in the Weinberg College of Arts and Sciences at Northwestern University.

He argues that the intensity of parenting has gone up in many countries in line with rising inequality.