Fifteen percent of Americans get no exercise and nearly a third of people in seven states – mostly in the South – are totally inactive, new Centers for Disease Control and Prevention maps reveal.

A sedentary lifestyle – defined as getting no physical activity beyond the basic movements from the couch to the kitchen or the car to your desk – is a risk factor for one in 10 early deaths.

Despite the surge of health, wellness and fitness gurus in recent years in the US, Americans are by and large still couch potatoes.

Coloradans fare a little better, with just 17.3 percent qualifying as ‘inactive,’ while nearly half of people in Puerto Rico are getting no exercise.

The CDC cautions that, if the sitting trend continues, sedentary life will cost the US $117 billion a year.

Southerners have the worst sedentary problem, with 30 percent or more (dark red) reporting zero physical activity in their leisure time. People in the West tend to be more active, (green)

Getting a move on would reduce Americans’ risks for many of the leading causes of death in the US, including heart disease, diabetes and cancer.

At least 200,000 of those would be preventable via lifestyle changes like quitting smoking, eating less salt and exercising.

But it doesn’t seem that Americans have gotten the message.

‘Too many adults are inactive, and they may not know how much it affects their health,’ says Dr Ruth Petersen, director of the CDC’s Division of Nutrition, Physical Activity, and Obesity.

‘Being physically active helps you sleep better, feel better and reduce your risk of obesity, heart disease, type 2 diabetes, and some cancers.’

Yet more than 15 percent of American adults, aren’t, according to the CDC’s figures, released Thursday.

No mainland region is more couch-prone than the South, where a composite 28 percent of people don’t move any more than absolutely necessary.

In Alabama, Arkansas, Kentucky, Louisiana, Mississippi, Oklahoma, and Tennessee, 30 percent or more people 18 and over report effectively no physical activity.

The same goes for Guam and Puerto Rico, where 47.7 percent of residents admit they are totally inactive.

Westerns are the most active, regionally, with a relatively low 20.5 percent of people committing none of their free time to activities like going to the gym, gardening or taking a walk.

The Northeast and Midwest have similarly middling rates of physical activity with about a quarter of residents confessing to being inactive.

it’s not exactly clear why activity levels differ between regions, but some studies suggest that urbanites are more likely to exercise than are rural residents and suburbanite. 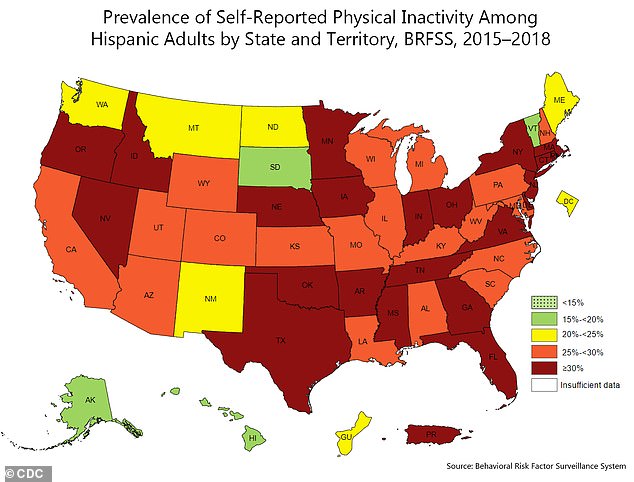 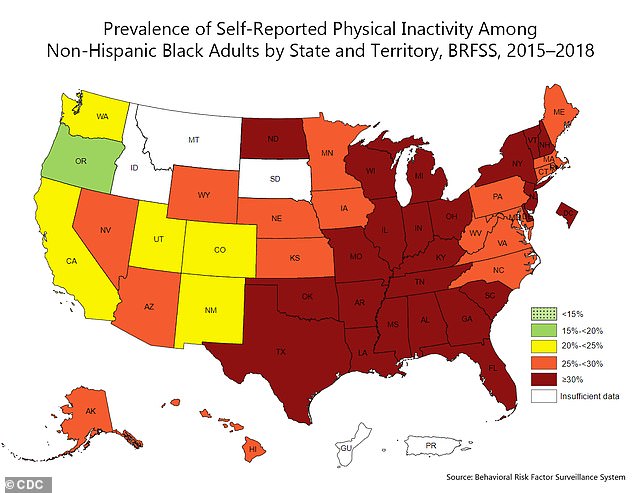 Rates were similarly high in a staggering 23 US states among black Americans. Only in Oregon did rates of inactivity fall below 20 percent (green)

So places with wide swaths of open land, like some Southern states, may be more apt to have low activity rates than coastal areas with higher concentrations of cities.

Inactivity is worryingly more common among minorities than it is among white Americans.

Nearly half of US states and Puerto Rico had inactivity rates of 30 percent or higher among their Hispanic and black residents.

Participants in a 2006 survey of black Americans most often cited time constraints, lack of motivation, health problems, fatigue and simply not having the know-how as reasons not to work out.

It may be that members of these communities tend to work longer hours and participate more in family and childcare-oriented activities, leaving them with less time to focus on their own health.

The CDC aims to get more Americans moving by 2027, with a goal of 25 minutes of physical activity every day, or 30 minutes five times a week.

‘Individuals and families are encouraged to build physical activity into their day by going for a brisk walk or a hike, walking the dog, choosing the stairs instead of the elevator or escalator, parking further away in the parking lot, walking or cycling to run errands, and getting off the bus one stop early and walking the rest of the way,’ the agency wrote.

‘The key is to move more and sit less.’