They split over a year ago and both have since moved on with new partners.

But Mariah Carey is still holding onto a very sparkly piece of her relationship with former fiance James Packer.

On Saturday the diva proudly flaunted a $500,000 diamond choker, gifted to her by her billionaire ex in 2015, as she partied with her toyboy beau Bryan Tanaka and Jamie Foxx at Floyd Mayweather’s birthday party in LA.

Looks familiar? Mariah Carey wore a $500,000 diamond choker gifted to her by former fiance James Packer during a night out with her beau Bryan Tanaka on Saturday

Mariah, 47, was joined by her dancer boyfriend Bryan, 34, – and a long list of celebrity peers – to party at the former boxer’s lavish birthday bash, held inside LA’s The Reserve nightclub.

The singer was seen arriving with her beau and laughing and joking with actor Jamie at their table, before birthday boy Floyd popped a magnum of champagne for guests.

While she looked sensational in a tight black mini dress, the real star of Mariah’s outfit was her glittering diamond choker.

The extravagant Van Cleef and Arpels diamond necklace, worth an eye-watering $500,000, was given to the star by her ex in 2015. Something old: The Van Cleef and Arpels diamond necklace, worth an eye-watering $500,000, was given to the star by her ex in 2015, when Packer opened his casino in Macau 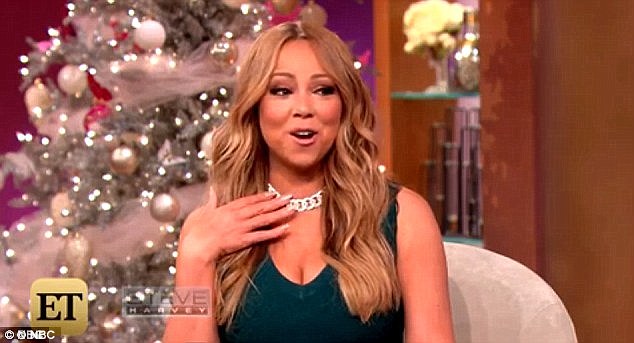 Favourite piece: Mariah joked about the necklace during an appearance on the Steve Harvey show in November, 2015. ‘Oh, this old thing?’ she quipped

The 33.95-carat necklace, named the Olympia, is part of the jeweller’s White Diamond High Jewellery collection.

Mariah joked about the necklace which James presented her with at the opening of his casino in Macau, during an appearance on the Steve Harvey show in November, 2015.

‘Oh, this old thing?’ she quipped before admitting: ‘This is a Van Cleef [& Arpels] piece that my new beau got for me recently.’ 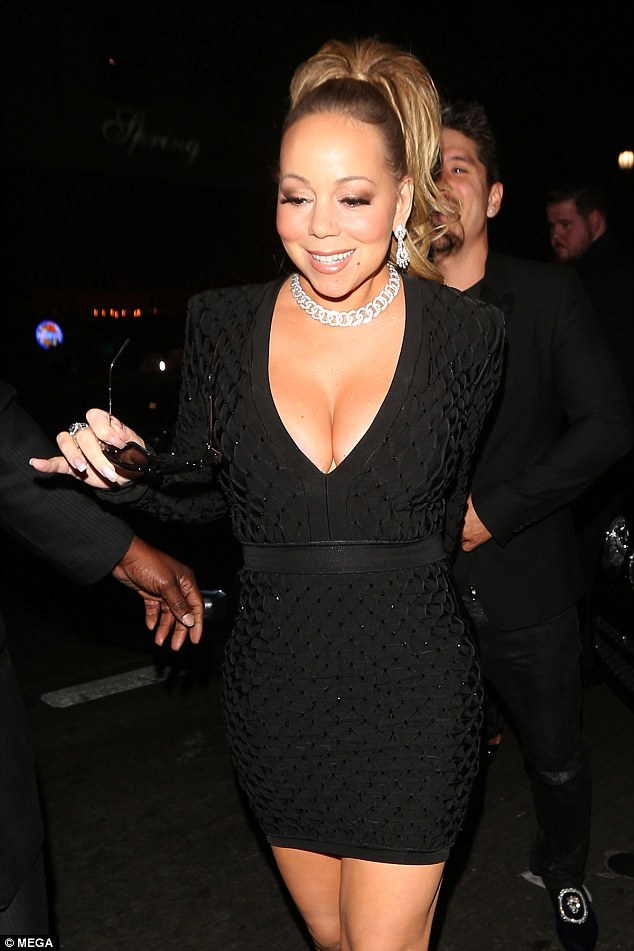 Diamonds are a girl’s best friend: Mariah teamed the choker with a pair of drop earrings and a bodycon mini dress for her Saturday night out with Bryan 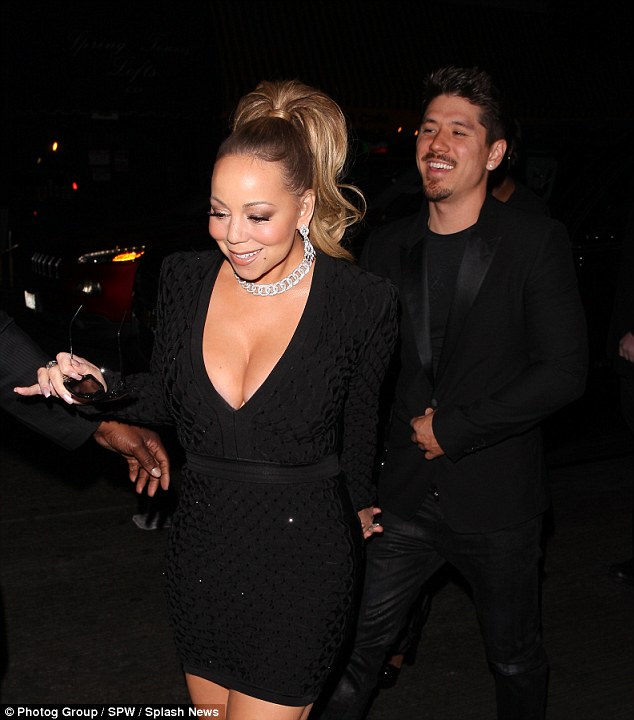 Can’t take it off: The star has been spotted wearing the necklace a number of times since splitting from James in October 2016 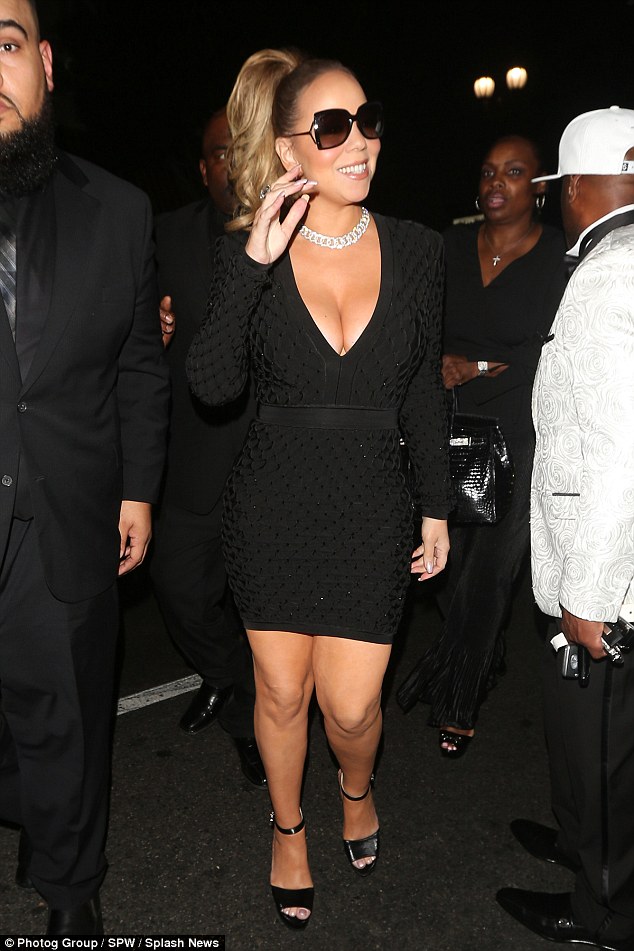 Party time: Mariah, 47, was joined by her dancer boyfriend Bryan Tanaka, 34, – and a long list of celebrity peers – to party at Floyd Mayweather’s lavish birthday bash

‘This was a very, very big surprise… Really nice. I wore it that night… he was opening a casino.’

Life & Style claimed last month that Australian billionaire James Packer wants Mariah to give back the $12.7 million (USD $10 million) 35 carat engagement ring he proposed to her with.

Despite their romance ending in October 2016, Mariah has continued to wear her engagement ring from James while spending time with her new beau Bryan. 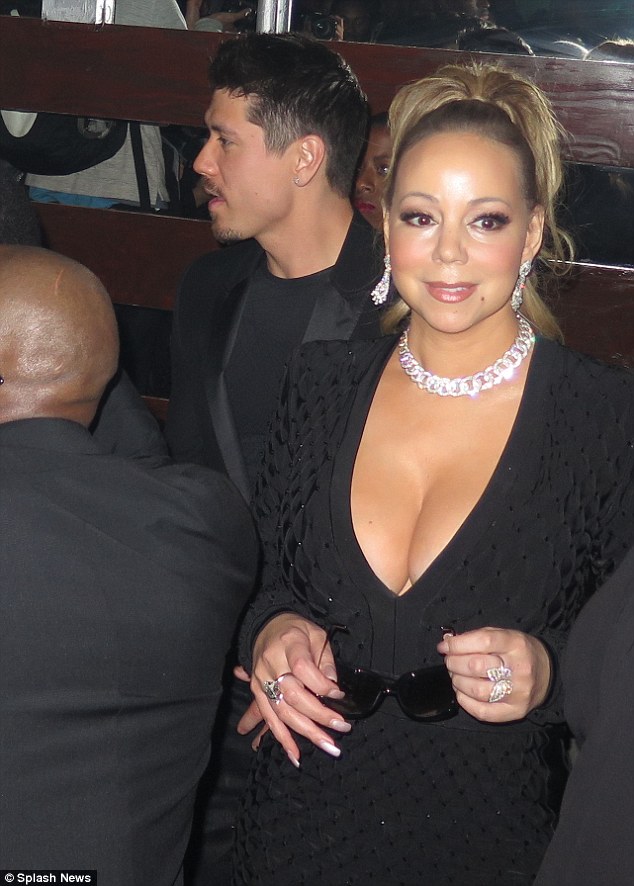 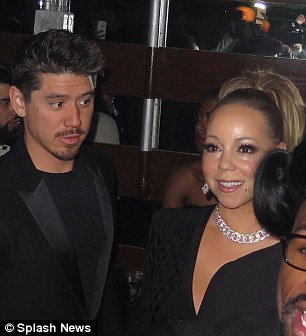 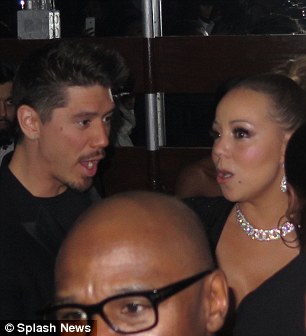 Having a ball: She and Bryan, who have been dating since April 2017, were seen chatting as they arrived at the bash

‘He’s told pals he wants his ring back,’ an insider told Life & Style, ‘and he’s going to have his team reach out to her to ask for it.’ However, a source close to James have confirmed to Daily Mail Australia the claims are untrue.

Mariah and Bryan have been practically inseparable since she split from her billionaire fiance James last October.

Mariah initially met the handsome back-up dancer when she employed him on her 40-date, $27.9 million grossing Adventures of Mimi Tour back in 2006. 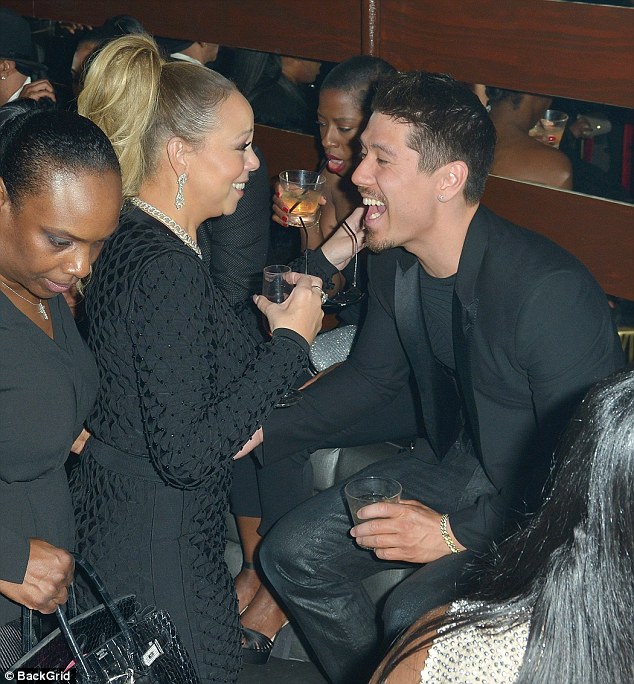 New beau: Mariah and Bryan have been practically inseparable since she split from her billionaire fiance James last October