‘Girlfriend, you are so on’: Marianne Williamson stuns with bizarre performance at Democratic presidential debate as she vows to ‘harness love’ to defeat Donald Trump

Author and spiritual guru Marianne Williamson has confused viewers as well as attracted new fans with her bizarre performance at the Democratic presidential primary debate.

In a memorable moment, Williamson declared that her first act as president would be to call the Prime Minister of New Zealand and declare the United States a better country to raise children.

‘Girlfriend, you are so on,’ Williamson said she would tell Prime Minister Jacinda Arden, who has said that New Zealand is the best place in the world to raise a child.

Relegated to the outside left podium, Williamson didn’t speak for the first 30 minutes of the debate, until jumping into an argument about healthcare policy. 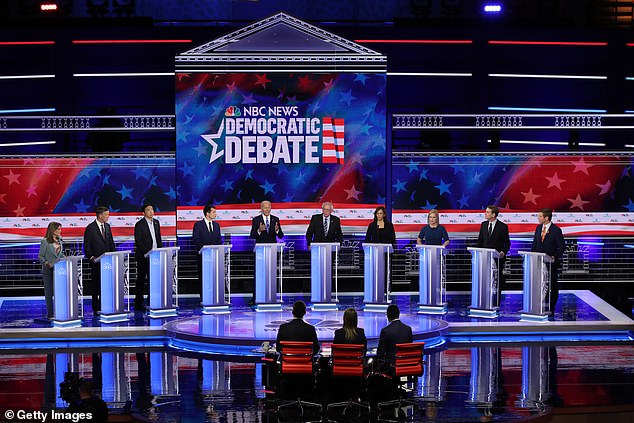 Williamson was relegated to the far-left podium, polling the lowest of the field along with Congressman Eric Swalwell at the far-right podium

She went on to say that Democrats need to ‘go deeper’ and that ‘chemicals’ are to blame for many health problems in the U.S.

In her concluding statement, Williamson declared that she was going to ‘harness love for political purposes’ to defeat Trump.

Her unusual performance drew did however draw praise on social media, where many compared her to a ‘Wine Aunt’ with ‘healing crystal energy.’

‘If the standard for the candidate is who you would want to split box wine with, Marianne Williamson won,’ one Twitter user wrote. 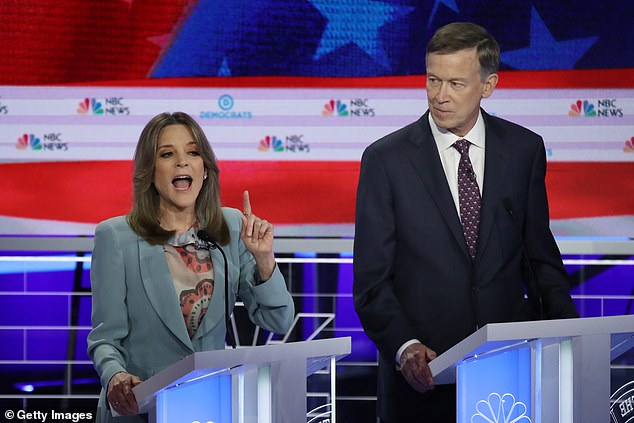 ‘Marianne Williamson is all of my mom’s friends when the wine kicks in,’ wrote another.’

‘When asked why they voted for President Marianne Williamson, more than 30% of Americans said that she was the kind of woman they could go to a wine bar with,’ another quipped.

Singer Katy Perry felt a kindred spirit in Williamson, writing: ‘not gonna lie i sound like Marianne Williamson after a few glasses of red.’

Williamson’s signature campaign proposal is a call for $100 billion in reparations for slavery to be distributed over 10 years, though she has also thrown out $200 and $500 billion as possible reparations figures.