All Marines now have the right to carry umbrellas for the first time in hundreds of years, but it started a thunderous debate among members.

The controversial new announcement came days before the Corps’ 244th birthday and upends a rule that has dated back to the branch’s beginnings in 1775.

Umbrellas were not allowed in part because it hindered the ability to salute.

Berger said: ‘Marines can carry an all-black, plain, standard or collapsible umbrella at their option during inclement weather with the service and dress uniforms.’

Prior to the regulation update, only female Marine’s were allowed to carry umbrellas under strict guidelines and only received permission to do so in 1972.

‘Female Marines may carry an all-black, plain standard or collapsible umbrella at their option during inclement weather with the service and dress uniforms. It will be carried in the left hand so that the hand salute can be properly rendered,’ according to Marine Corps Uniform Regulations. 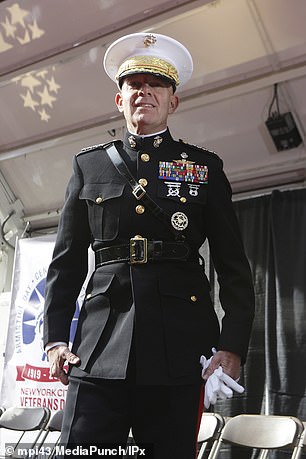 The regulation specified that umbrellas may not be carried or used in formation, nor carried with the utility uniform.

While some Marines are commending the branch for approving something that is ‘common sense,’ it has left other members refusing to participate.

Shane Witcher, 56, told The Wall Street Journal that holding an umbrella can hinder a Marine’s ability to do their job.

‘A Marine cannot choke an enemy or properly punch him in the face with an umbrella in his hand,’ Witcher, a Marine veteran in Texas, said.

‘We are always at the ready and it just goes against the grain of that very philosophy to have an umbrella in your hand.’

He wrote: ‘There is no place for an umbrella in a Marines hands. A Marine should always be at the ready to salute, hold a door for a lady, shake a hand, wield a rifle, pistol, knife or toss a grenade.’

However, Maximilian Uriarte, a Marine veteran in California, supports the new move.

Uriarte said: ‘I always applaud the progress of removing stupid rules that shouldn’t have existed in the first place.’

Still, the policy only permits the use of umbrellas under certain direction and occasions.

Marines wearing their camouflage utilities will not be carrying umbrellas with them into battle or into the field any time soon.

Marines in formation will also have to brave the elements going forward. 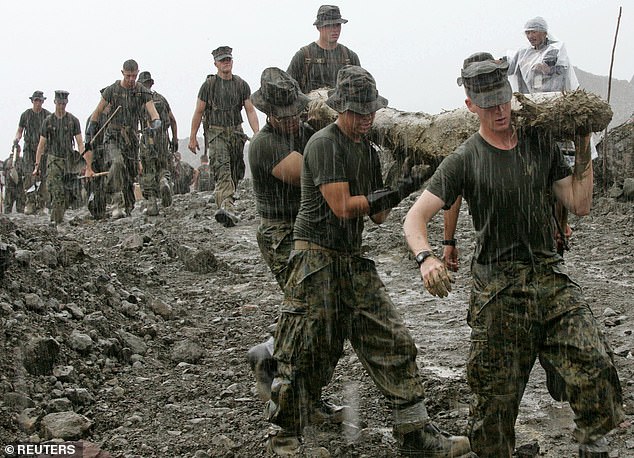 The use of umbrellas are only allowed when members are wearing the greens service uniform and dress blues, for times like formal dinners, working in a headquarters or while on recruiting duty.

The path to sanction all Marine Corps members to tote umbrellas began after female members have seen six proposed efforts since 1972.

Officials gave no formal reason umbrellas were approved for women and not men, though some said it involved men wanting to appear ‘rugged.’

All were shot down, according to Mary Boyt, program manager for the Marine Corps Uniform Board.

She cited a recent survey that found 76 percent of men and 94 percent of women said umbrellas should be allowed in the Marine’s dress code.

‘I can’t tell you why it got approved this time around,’ Boyt admits, but she reports that many supported the cause to preserve their uniforms rather than staying dry. 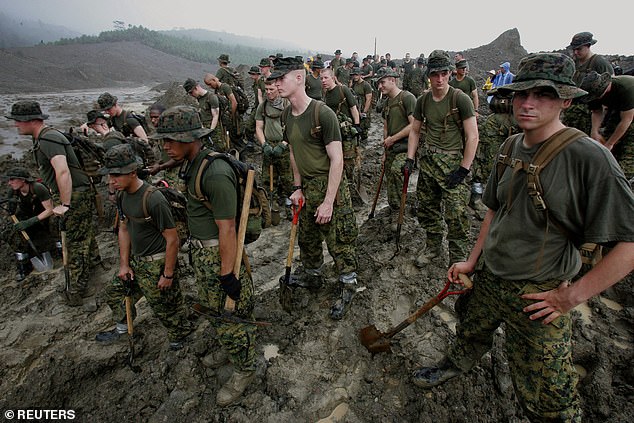 Witcher: ‘A Marine cannot choke an enemy or properly punch him in the face with an umbrella in his hand’

An alternative to getting drenched is wearing what Marine Corps members refer to as the Inspector Gadget, a trench coat that resembles the one worn by the 1980’s cartoon detective.

But many won’t wear the coat and often lose it after it’s issued.

Cpl. Jose Hernandez told The Wall Street Journal: ‘We should have umbrellas. It’s common sense. To be honest, the Inspector Gadget is pretty ugly.’

On the other hand, Lance Cpl. Dylan Mendoza stepped in to root for the other side.

‘What if you need both hands?’ Mendoza asked. 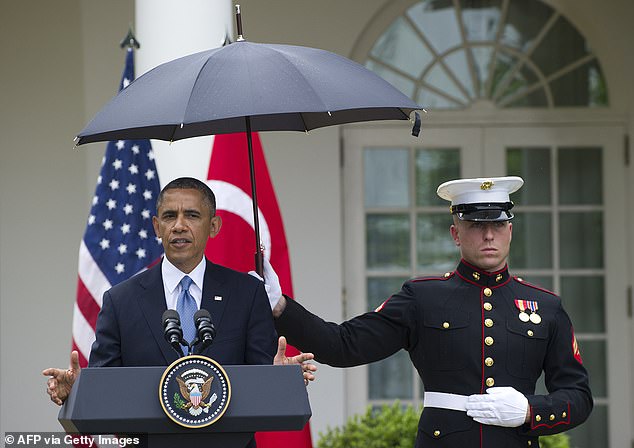 The Marine Corps relationship with umbrellas made headlines in 2013 when a former President Barack Obama was shielded from a downpour of rain by a Marine holding a one over his head.

The event, which would go on to be known as ‘Umbrella-gate’ by some, incited backlash against Obama for his apparent ignorance of Marine Corps protocol.

In May, the board considered whether Marines can tailor their dress shirts to appear more form-fitting.

As of today, they are allowed to do so.