Mario Testino’s secret British wife who knew he was gay

He is dapper in a white tuxedo and bow tie, sporting an Errol Flynn-style moustache; she, an attractive blonde, is elegant in black. The caption under the picture reads: Super Mario Birthday Party!

The man is unmistakably Mario Testino, favourite photographer of the royals and darling of the fashion world, about to make a birthday speech.

But the lady beside him, to whom he is obviously close, it not immediately identifiable.

Given the lurid headlines over the past couple of weeks since the New York Times alleged that 13 male models and assistants had come forward to claim that Testino had made inappropriate advances to them in the 1990s, the answer might come as quite a shock.

For the glamorous lady in question, the Daily Mail reveals today, is Carol-Anne Turner, a 62-year-old British woman who runs an upmarket B&B in North London – and who also happens to be Mario Testino’s secret wife.

The picture of Testino was taken on September 29, 2014, some 36 years after the couple were married in London.

Testino, 63, has given various interviews over the years about his life, coming to London from Peru to try to make it as a photographer, living in slum digs as he sought fame and fortune.

But he has never once mentioned Carol-Anne – the waitress whom he married in 1978 when she was 22 and he was a 24-year-old photography student waiting on tables to pay his rent.

They were married on November 21 at Old Marylebone Town Hall. Testino’s father, also Mario, is described as a ‘landowner’ on the certificate, while Carol-Anne’s father, Harold, is a ‘property owner’.

It was a small gathering of a few friends. One of the guests was Waldo Roeg, son of Nicolas Roeg, the acclaimed British film director whose movies include Don’t Look Now starring Julie Christie and The Man Who Fell To Earth with David Bowie.

‘It was quite a small affair,’ recalls Waldo, who was one of the witnesses. ‘We were all friends with Carol-Anne and I was Mario’s flatmate at the time. We were living in a little flat in Covent Garden. It was a lovely occasion, we were all very young … It was quite informal, not a white wedding, and we all went on to a nightclub afterwards. 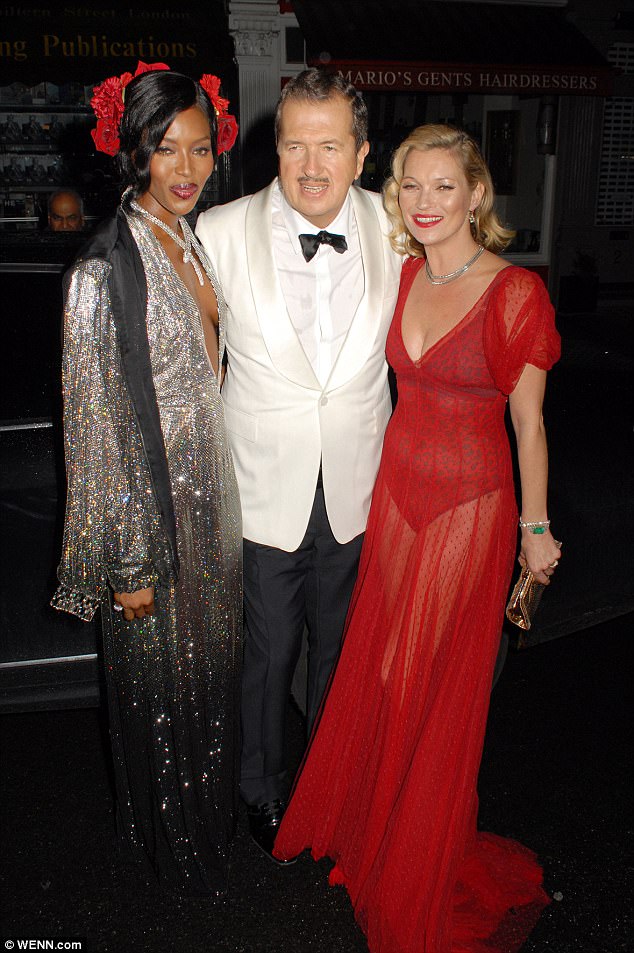 Testino (pictured with Naomi Campbell and Kate Moss in 2014), has been accused of molesting 13 male models and photographers

‘It was a love match, yes. It was a different era, Bowie and androgyny and all that sort of thing. People didn’t really care if someone was gay or not. I don’t know how long the marriage lasted but I do believe that Mario and Carol-Anne are still close today.’

They certainly are. While Carol-Anne declined to comment when the Mail contacted her to ask about the marriage, this week she made a statement.

‘To clarify, we were young and in love and having the time of our life! Of course I was aware Mario is gay, but we thought it would work itself out. The marriage didn’t work but all these years later we still love each other and are close friends.’

So are they still married? It’s not clear if they ever divorced, but it seems that even today a part of Carol-Anne Turner firmly remains Mrs Testino.

When Testino and Carol-Anne met in the Seventies, says Waldo, Testino was working as a waiter at the Peppermint Park restaurant in Covent Garden, a celebrity haunt. ‘Mario struggled to make ends meet,’ he recalls.

Mario himself said in a 2009 interview: ‘When I came to study in London in 1976, I moved into an unconverted floor of a hospital. A dossers’ home. I didn’t have any money to eat, let alone get a bus.’

By 1985 the marriage was over and Carol-Anne was in a relationship with a man called William Gosling, which produced a son, Buster, now 32.

As Carol-Anne’s statement suggests, as much as they loved one another, Testino’s sexuality ultimately contributed to the end of the marriage. Discussing his sexuality once, Testino was ambiguous. ‘I’ve never wanted to call myself any sexuality, because I hate the idea of taking freedom away from you and I think we all can be everything,’ he said.

‘I understand that at moments you have to define it, but my sexuality has been so wide and open, and that’s what’s influenced my way of working. I think it’s given me freedom, my sexuality.’ 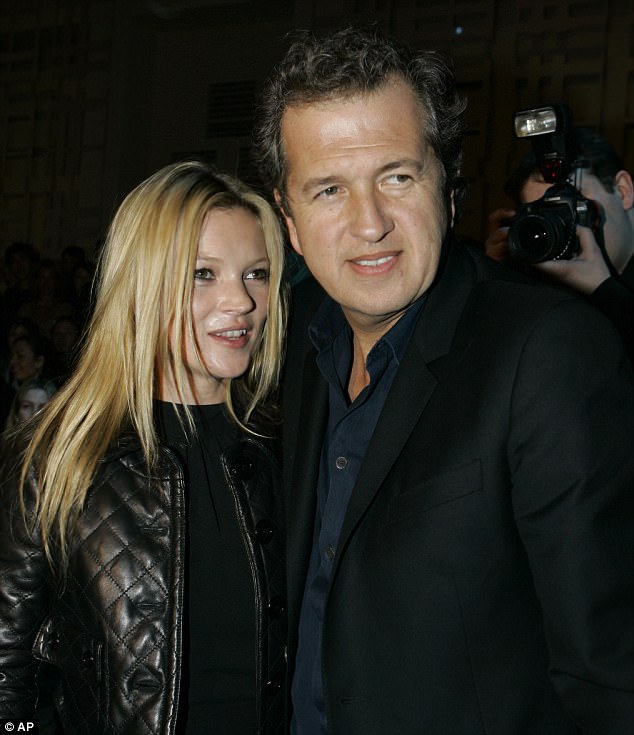 Before the sex scandal broke, Testino – whose lawyers have disputed the accounts of those making claims against him and have called them unreliable – led the most gilded of existences.

By 1990 he was a successful photographer and had been introduced to Kate Moss, whom he counts as a close friend.

In 1997 he became famous overnight for taking a series of iconic photos of Princess Diana for Vanity Fair months before her death. The pictures, dazzling in their vivacity, showed a playful yet soulful side to the princess that had never been seen before.

The reaction was overwhelming. From then on, he became known simply as Testino and was the royal photographer of choice. It was to him that Prince Charles, perhaps feeling in need of some image softening, went for warm, family portraits with his teenage sons.

When William became engaged to Kate in 2010, it was Testino who marked their engagement with a loving yet informal image of the couple cuddling up to one another. In July 2015, he took the official photos following Princess Charlotte’s christening.

Hollywood loved him, too. He took pictures of A-listers including George Clooney and Brad Pitt and became great friends with Gwyneth Paltrow.

With his fame came considerable financial success. He lived in a swish apartment in London’s exclusive Holland Park. He flew either first-class or on private jets and was known to travel with seven assistants at a time. 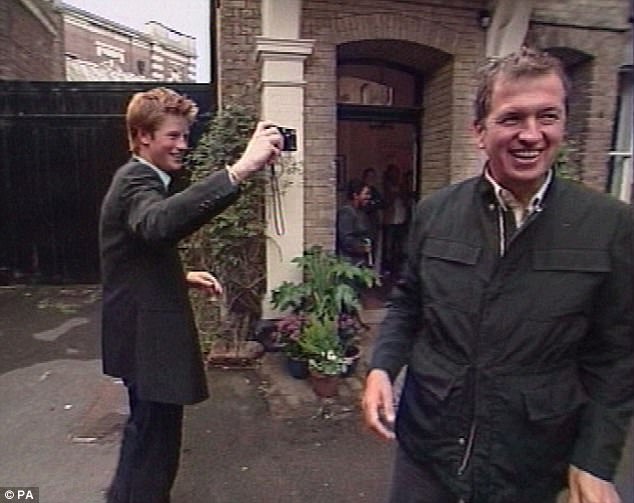 Despite the allegations, Carol-Anne Turner says that she is sticking by her husband, pictured in 2002 with Prince Harry

His Instagram page is filled with beautiful people and beautiful beaches. In January 2014, he received an honorary OBE.

Until two weeks ago, to be photographed by Testino was regarded as the ultimate sign of success. Everyone wanted to be his friend – a couple of years ago at a party the great and the good even formed a queue to speak to him.

Carol-Anne’s life has been much more low-key. Born in Hampstead, after leaving school she was a waitress for 12 years and was working as one around the time of her marriage to Testino.

Her working life has been varied, and has included managing a restaurant, and working as a food stylist, as a costume designer in films and as a make-up artist.

She started her B&B after inheriting a large Edwardian property from her grandfather. Throughout this time, she and ‘Super Mario’ have stayed close.

For his part, Testino – once the darling of US Vogue editor Anna Wintour – has now been suspended from working from Vogue and other Conde Nast publications following the claims against him, which date from the 1990s.

He is alleged to have groped and performed sex acts on models who claim they felt pressured into going along with his behaviour for fear of damaging their careers. 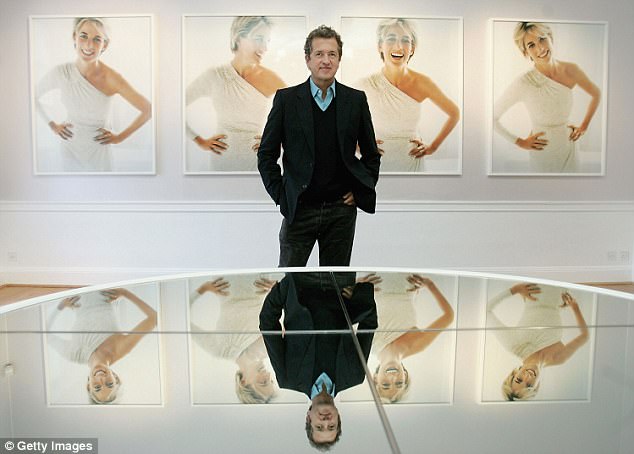 Testino was the photographer behind Princess Dianna’s last portrait sitting, with an exhibition of the Princess unveiled in 2005

American model Jason Fedele is quoted as saying: ‘If you wanted to work with Mario, you needed to do a nude shoot at the Chateau Marmont [a luxury hotel in LA].’

British photographer Hugo Tillman, a former assistant to Testino, reportedly said he once tried to kiss him and, a few weeks later, pinned him down on a bed until he was removed by another person.

Testino’s lawyers have challenged the credibility of the accusations, telling The Times they had spoken to several former employees who were shocked by the allegations.

Testino’s reputation, which had reached almost legendary status, has been all but destroyed, although no charges have been brought.

The day after the allegations broke, Carol-Anne posted this message on Instagram, accompanied by a picture of Testino: ‘Shout out to my oldest friend. True friendship doesn’t judge. Mrs Testino.’

Many of Testino’s friends appear to have been quick to desert him. It’s touching then, that Mrs Testino, the young waitress whom he married nearly 40 years ago and whose existence has remained secret all that time, remains unwavering in her loyalty.