Marjorie Taylor Greene on Saturday defended comparing mask mandates to the Holocaust by claiming ‘any ration Jewish person’ doesn’t like either.

Anti-Semitism is on the rise in American and the world after a massive conflict broke out between Israel and Hamas operating in Gaza earlier this month. The conflict has left several hundred dead so far as bombings increase. 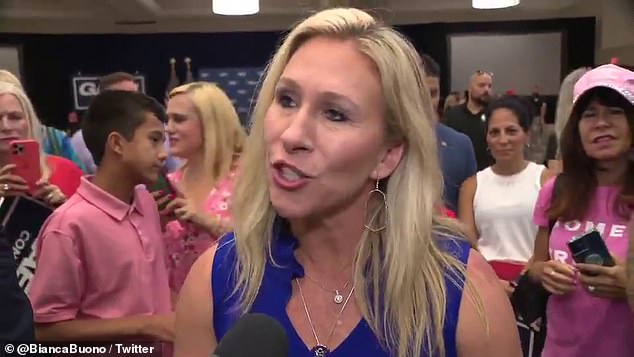 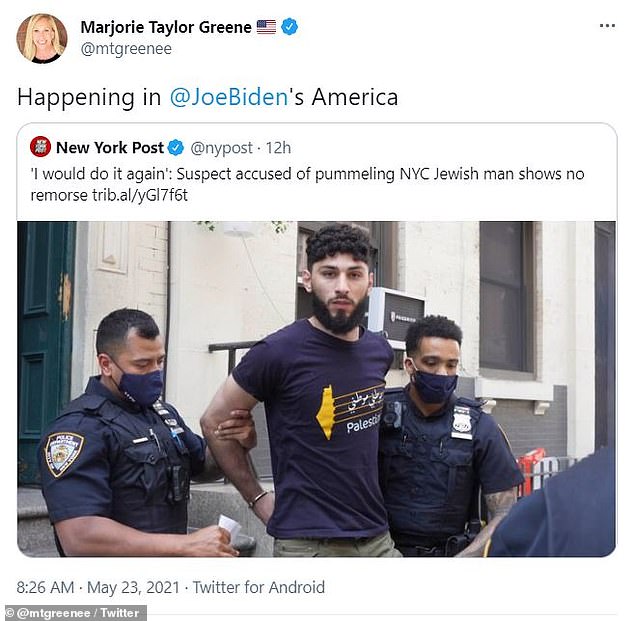 She blamed President Joe Biden for the rise in anti-Semitic attacks. ‘Happening in Joe Biden’s America,’ Greene wrote on Twitter of a man beating a yarmulke-wearing Jewish man in New York

She claimed Pelosi’s decision to require proof of vaccination before members are allowed to take their masks off on the House floor to the ‘Gold Star’ Jewish people were forced to wear during the Holocaust.

‘You know, we can look back at a time in history where people were told to wear a gold star, and they were definitely treated like second class citizens, so much so that they were put in trains and taken to gas chambers in Nazi Germany,’ Greene told David Brody on his Christian Broadcasting Network podcast ‘The Water Cooler.’

Wyoming Representative Liz Cheney, who was recently ousted from her Republican Conference chair position for not backing voter fraud claims, lashed out at Greene’s comments in a tweet Saturday saying: ‘This is evil lunacy.’

A reporter with News 12 asked Greene on Saturday: ‘Do you understand, though, why some would be upset and offended by the comment?’

‘Do you understand how people feel about being forced to wear masks, or being forced to have to take a vaccine, or even have to say whether they’ve taken it or not,’ Greene shot back.

‘These are just things that shouldn’t be happening in America, this is a free country and it’s just ridiculous to have these kind of conversations,’ she continued.

Greene traveled to Arizona on Saturday with embattled Florida Representative Matt Gaetz as part of their ‘America First’ roadshow. Arizona is currently undergoing a massive recount effort as Donald Trump allies push the former president’s claim that the 2020 election was ‘rigged’.

‘Here’s what I stand by, we shouldn’t be having this kind of treatment,’ Greene said of Pelosi’ requiring those in the lower chamber who opt not to get vaccinated to continue wearing a mask. ‘No one should be treated like a second class citizen for saying, ‘I don’t need to wear a mask,’ or saying that ‘my medical records are my privacy based on my HIPPA rights.’ And so I stand by all of my statements, I said nothing wrong.’ 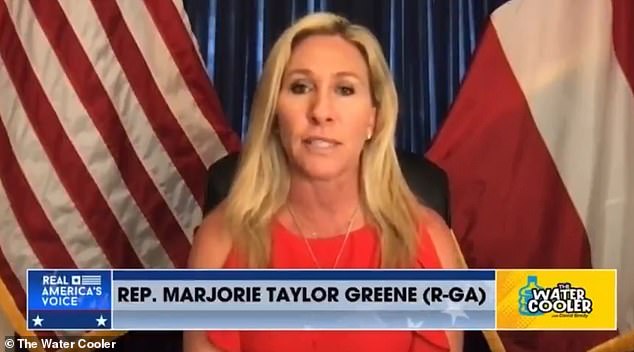 The Centers for Disease Control and Prevention released guidance last earlier this month saying all fully vaccinated individuals no longer have to wear a mask indoors or outdoors.

Someone qualifies as a fully vaccinated individual two weeks after they received their final dose of the COVID-19 shot – whether it be the one or two-shot inoculation.

Republicans claim this is just another way to weed out anti-maskers and try to force them to get the vaccine.

Former Representative Denver Riggleman was among those who condemned Greene for her comments last week comparing the mandates to the genocide of 6 million Jewish people.

‘Comparing wearing masks to the abuse of the Holocaust is a not so subtle diminution of the horrors experienced by millions,’ he tweeted. ‘It’s a grotesque idiocy mixed with a neurotic lack of self awareness. What do you expect from a truther, Q believer, and gaslighting conspiracy theorist?’ 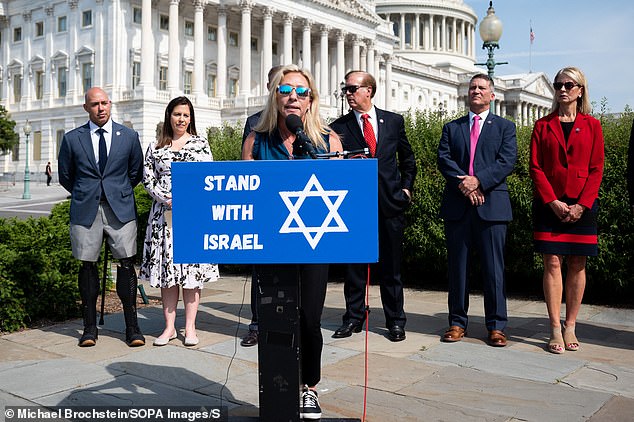 Several Jewish groups, like the American Jewish Congress, and other individuals were quick to condemn the comparison

MTG says Speaker Pelosi wanting Members of Congress to get vaccinated and if not to wear masks is “exactly the type of abuse” as murdering Jews in gas chambers during the Holocaust and David Brody nods along. No follow up. pic.twitter.com/inXfD8UBiG

Political scientist Jasmin Mujanović wrote: ‘This is antisemitism of a most despicable and deranged sort.

‘This is a woman whose own politics can credibly be described as fascist trivializing the actual, historical facts of the Holocaust.

‘And I repeat my prediction: she’s a front runner for the 2024 GOP nomination.’

And Rhode Island Congressman David Cilline said: ‘The Holocaust: The systematic murder of 6 million Jews. Mask-wearing: A simple act that costs you nothing and saves lives. Marjorie Taylor Greene: A troubled person who is unfit to serve in Congress.’

Jewish groups, like the American Jewish Congress, and many others quickly condemned the comments on social media as diminishing the six million Jewish people who died during the Holocaust.

‘You can never compare health-related restrictions with yellow stars, gas chambers and other Nazi atrocities,’ The American Jewish Congress tweeted on Friday. ‘Such comparisons demean the Holocaust and contaminate American political speech.’

The group called for a retraction and apology from Greene, which she hasn’t done to date. 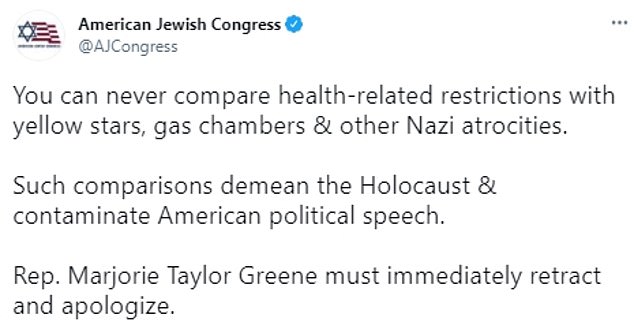 She also branded AOC a ‘terrorist’ for supporting a cease in military funding for the Israeli government.

‘.@AOC you’re responsible for attacks on Jewish people bc of your hate-Israel stance against Israel’s right to defend itself from from terrorists Hamas, calling Israel an apartheid state, & supporting terrorists groups. Aligning yourself with terrorists means your [sic] a terrorist,’ Greene said in the tweet.

At the bottom of the tweet, Greene shared an image of AOC’s call to end antisemitism next to a headline about her resolution that would cut funding for Israeli bombs.

Greene shot to fame for pushing a series of bizarre QAnon conspiracy theories before she was elected as a representative for Georgia’s 14th congressional district in November 2020.

In a 2018 Facebook post, she claimed a ‘Jewish space later’ controlled by the Rothschild banking family had been used to ignite California wildfires.