Marjorie Taylor Greene put up a sign outside her office proclaiming ‘there are TWO genders’ after her congressional hall mate Marie Newman, who has a trans daughter, put up a trans pride flag outside her office as the two publicly feud over legislation bolstering trans rights.

‘Thought we’d put up our Transgender flag so she can look at it every time she opens her door,’ she continued including a winking face and transgender flag emoji.

The tweet came with a video of the congresswoman showing the proximity of her office to Greene’s, then the Illinois Democrat is shown placing the flag outside her office and brushing her hands together with a smirk.

Greene responded with a video of her own posted to her congressional Twitter.

‘Our neighbor, [Marie Newman], wants to pass the so-called ‘Equality’ Act to destroy women’s rights and religious freedoms,’ she wrote in her tweet. ‘Thought we’d put up ours so she can look at it every time she opens her door.’

The Georgia Republican included two emojis as well – a winking face and a U.S. flag.

Her video, like her tweet, mirrors Newman’s by showing the two offices, then Greene is seen putting up a large sign outside her door that read: ‘There are TWO genders: MALE & FEMALE ‘Trust the Science!”

Greene put up a large sign outside her Capitol Hill office Wednesday that reads: ‘There are TWO genders: MALE & FEMALE ‘Trust the Science!” 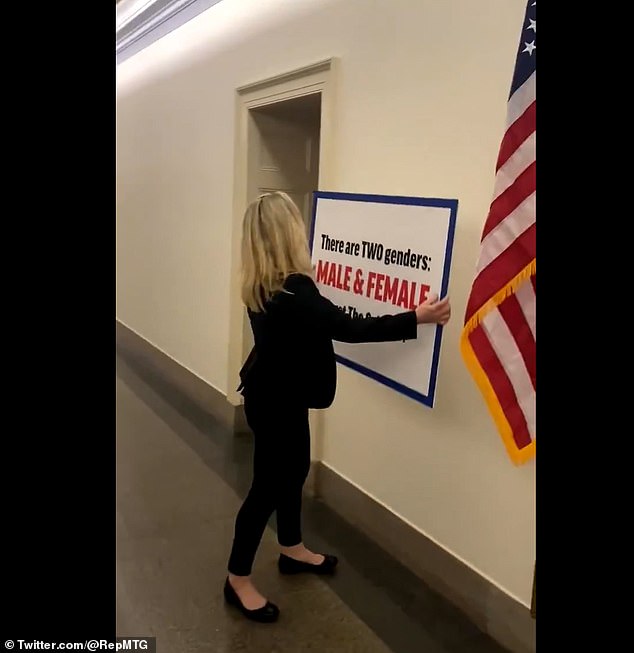 Greene hiung the sign in response to her across-the-hall neighbor, Democratic Rep. Marie Newman, putting up a trans pride flag 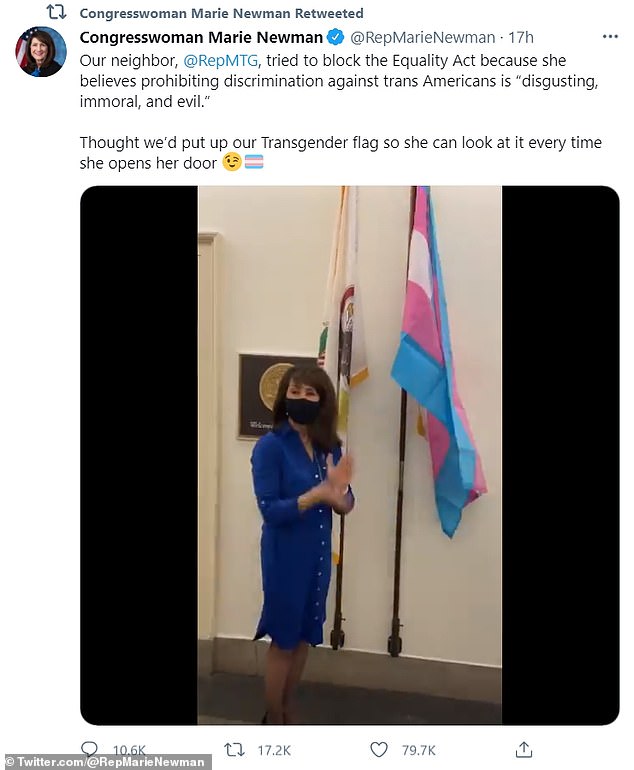 Rep. Newman, who has a trans daughter, posted a video of her putting up a trans pride flag outside her office so Greene would have to see it every day after the Republican lawmaker publicly opposed legislation that would bolster trans rights 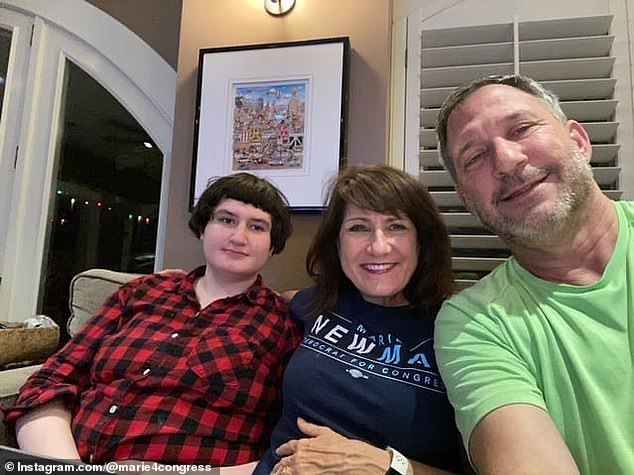 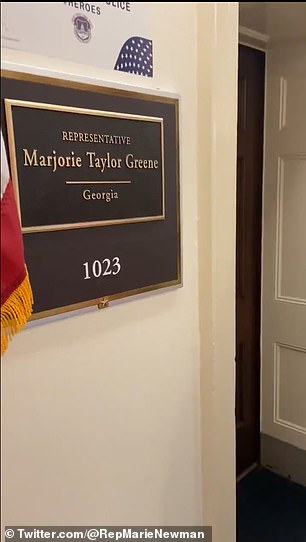 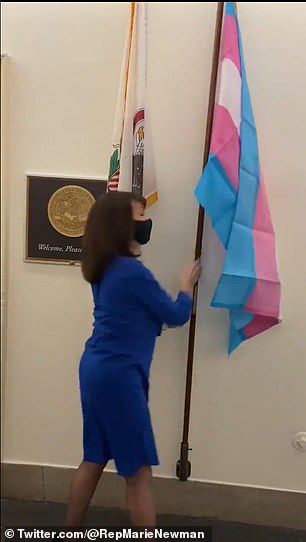 Newman’s video posted Wednesday shows the proximity of her office to Greene’s, then shows her holding the blue and pink trans pride flag and putting it next to the American Flag outside her office 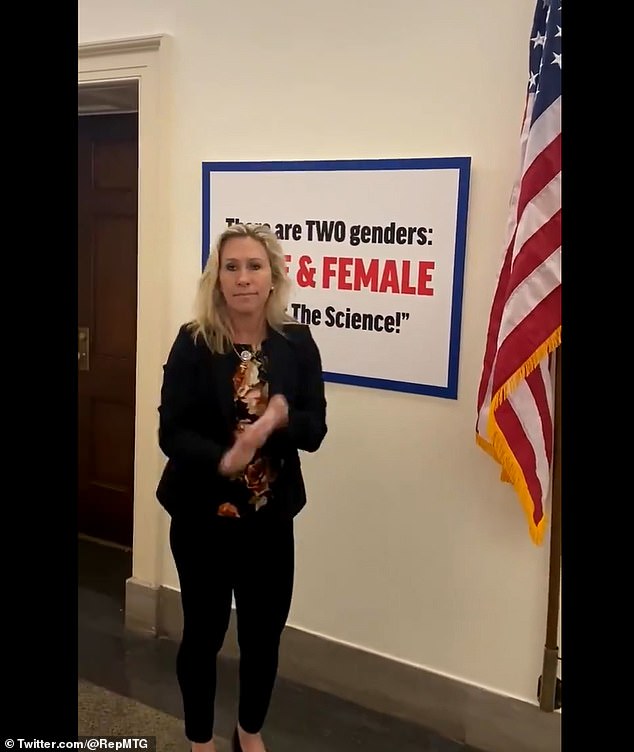 Greene imitated much of Newman’s video while being video-taped putting up the sign, including brushing her hands together at the end and smirking 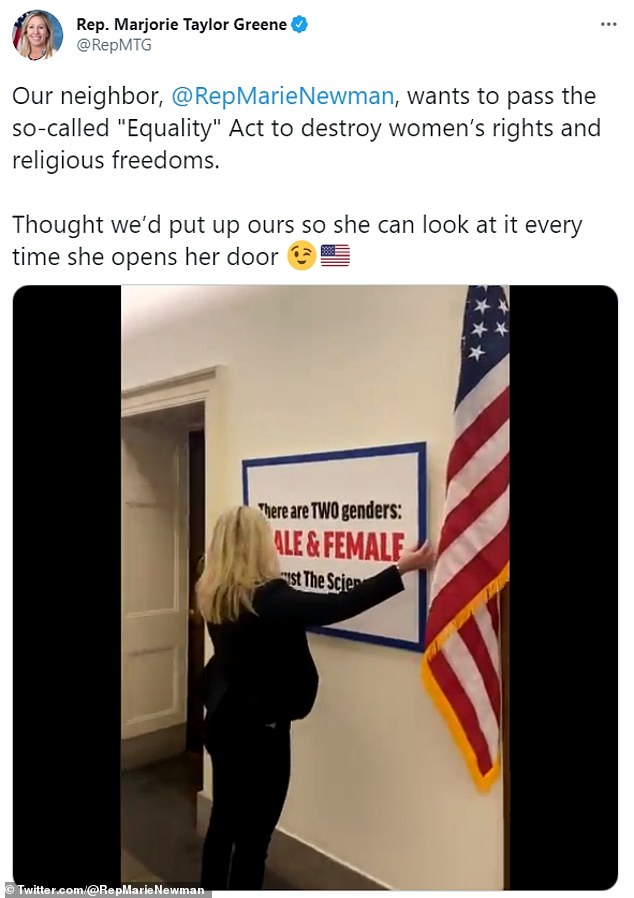 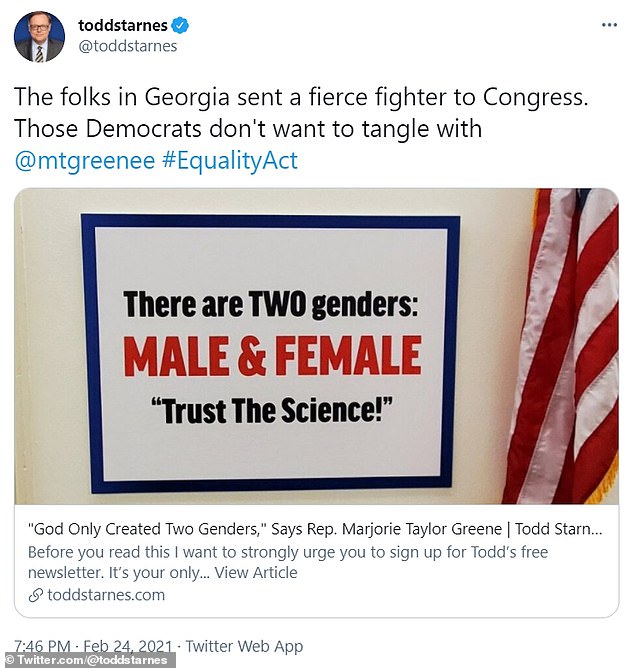 The feud emerged after Greene, who was famously removed from her two committee assignments after espousing QAnon conspiracies before elected to Congress, moved to adjourn the House session Wednesday so members could ‘rethink’ the Equality Act, which was co-sponsored by Newman.

Greene said the legislation would ‘put trans rights above women’s rights – above the rights of our daughters, our sisters, our friends, our grandmothers, our aunts. It’s too much.’

‘Without the Equality Act, millions of Americans like my daughter can be denied housing, education, and more simply because they identify as transgender,’ Newman wrote on Twitter along with a video of her speaking on the House floor about the bill.

‘I’m voting to pass the Equality Act for my daughter – the strongest, bravest person I know,’ she continued.

Greene, who has three children, responded on Twitter: ‘As mothers, we all love and support our children. But your biological son does NOT belong in my daughters’ bathrooms, locker rooms, and sports teams.’ 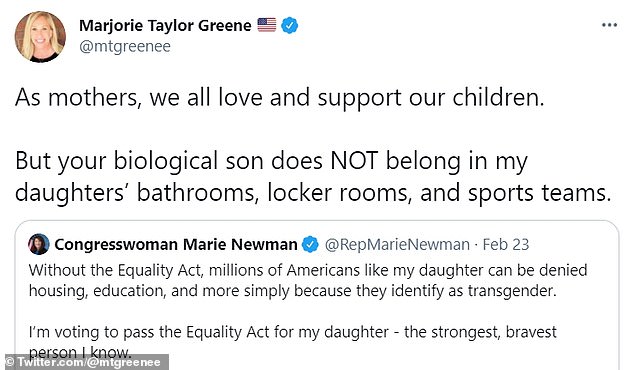 Newman is supporting the Equality Act, which bolsters trans rights. But Greene said in a tweet aimed at the lawmaker and her trans daughter: ‘Your biological son does NOT belong in my daughters’ bathrooms, locker rooms, and sports teams’ 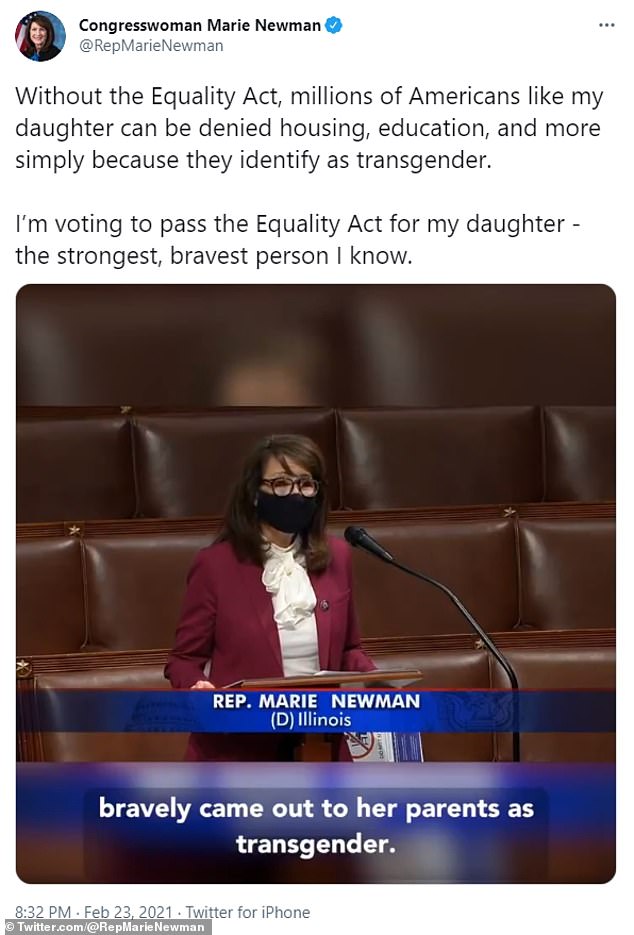 On Wednesday, Newman voiced her support for the bill, saying she was voting in favor of the bill to progress rights for her trans daughter, Evie, and others who identify as the opposite gender they were born

During her floor speech before asking to adjourn, she referenced her past playing sports, saying she was ‘blessed’ she only had to compete against biological women.

In another tweet on her personal page, she posted a video of her remarks, writing: ‘The so-called ‘Equality’ Act is disgusting, immoral, and evil. I will proudly vote NO.’ 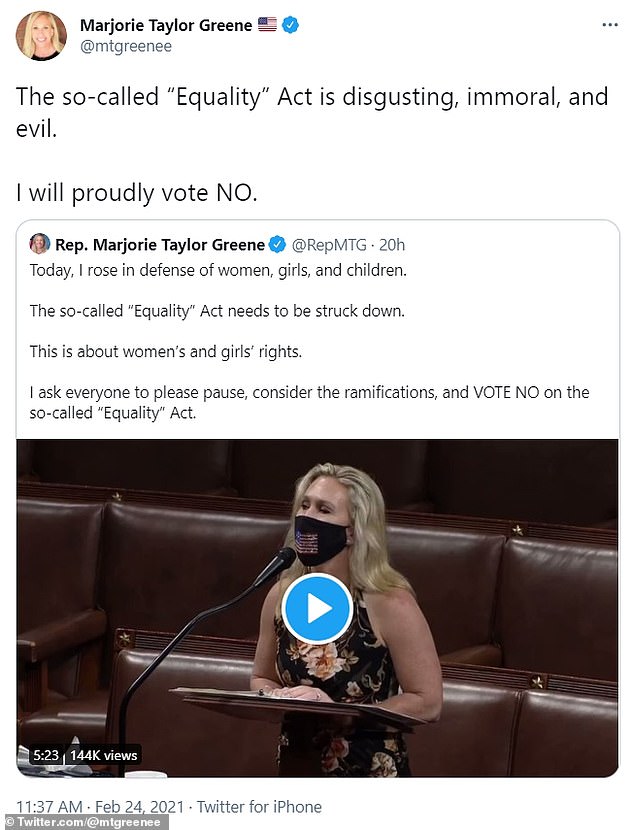 Greene posted a slew of other tweets Wednesday voicing her opposition to the Equality Act, including calling the legislation ‘disgusting, immoral, and evil’ 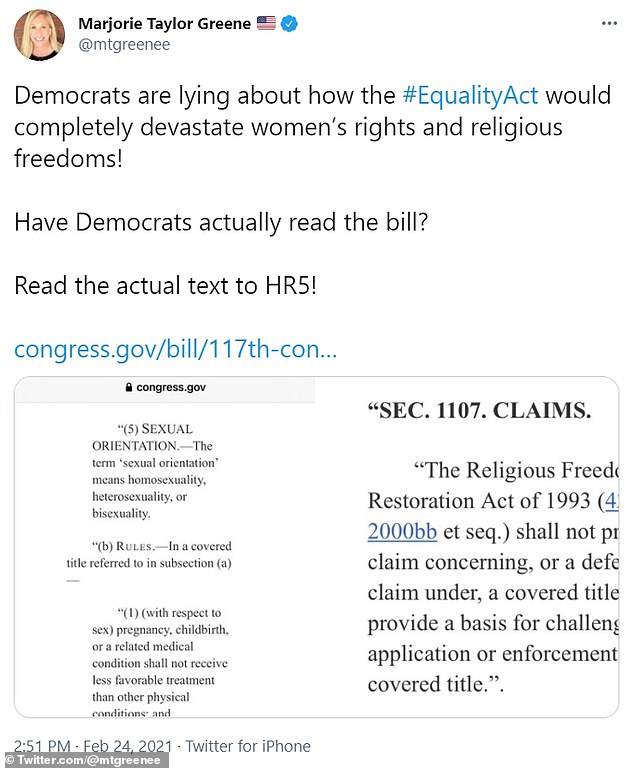 Representative Pramila Jayapal, who has a trans child that identifies as non-binary, praised Newman on Twitter.

‘Thank you, [Marie Newman]. From the mom of one trans kid to another, we will pass the #EqualityAct —for Evie, for Janak, for thousands more to be able to fully be who they are. So glad to welcome you to Congress.’

Greene is urging her colleagues to ‘read the actual text’ before voting.

‘Democrats are lying about how the #EqualityAct would completely devastate women’s rights and religious freedoms!’ she tweeted. ‘Have Democrats actually read the bill? Read the actual text to HR5!’

Republican Representative Bob Good of Virginia thanked Greene for adjourning Congress so lawmakers could have more time to consider the bill.

‘I thank my colleague, [Marjorie Taylor Greene], for her attempt to provide members the proper amount of time to consider this terrible piece of legislation,’ he tweeted.

On the other hand, Democratic lawmakers are coming to Newman’s defense and attacking Greene for the ‘pathetic’ display.

Illinois Rep. Sean Casten, a Democrat, defended his colleague and claimed Greene is ‘pathetic’ and ‘cruel’ for opposing the Equality Act and putting the sign outside her office 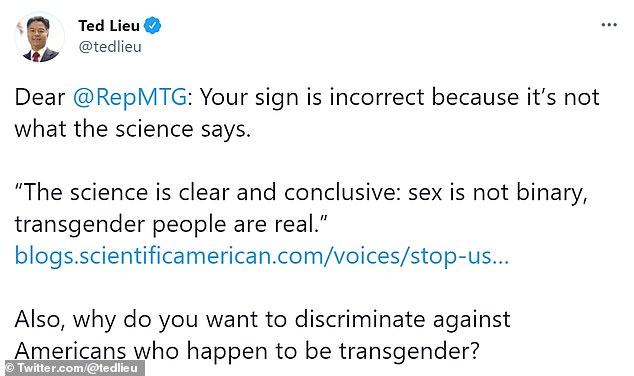 California Democratic Rep. Ted Lieu said science was not in Greene’s favor, linking to a scientific article that claims ‘sex is not binary, transgender people are real’

‘Sickening, pathetic, unimaginably cruel,’ Illinois Representative Sean Casten posted on Twitter Wednesday in regards to Greene. ‘This hate is exactly why the #EqualityAct is necessary and what we must protect [Marie Newman’s] daughter and all our LGBTQ+ loved ones against.’

Representative Ted Lieu of California posted: ‘Dear [Marjorie Taylor Greene]: Your sign is incorrect because it’s not what the science says.’

He then quotes an article from Scientific American magazine: ‘The science is clear and conclusive: sex is not binary, transgender people are real.’

‘Also, why do you want to discriminate against Americans who happen to be transgender?’ he questioned as he reposted her video putting up the sign demanding people: ‘Trust the science!’