MARK ALMOND: Germany is unforgivably dragging its feet over tanks for Ukraine…

MARK ALMOND: Germany is unforgivably dragging its feet over tanks for Ukraine… This dithering by Olaf Scholz is cruel and costly for Kyiv

By Mark Almond For The Daily Mail

The most brutal trench warfare since the Somme in the First World War is raging in eastern Ukraine. Vladimir Putin is sending wave upon wave of troops over the top – resulting in devastating casualties on both sides.

Back in 1918, it was the tank – a British invention – that broke the stalemate on the Western Front and ended that war decisively. Now, unable to compete with Russia’s supply of cannon-fodder recruits, Ukrainians see modern Western tanks as the best way to break the back of the invading force.

Ukraine has already knocked out huge numbers of Russian tanks but Putin has more coming into action this spring. So Volodymyr Zelensky is pleading for 300 modern tanks to blunt the impending offensive.

Yet Germany is unforgivably dragging its feet, refusing to allow German-made Leopard II tanks – one of the world’s most formidable weapons – to be sent to Ukraine. 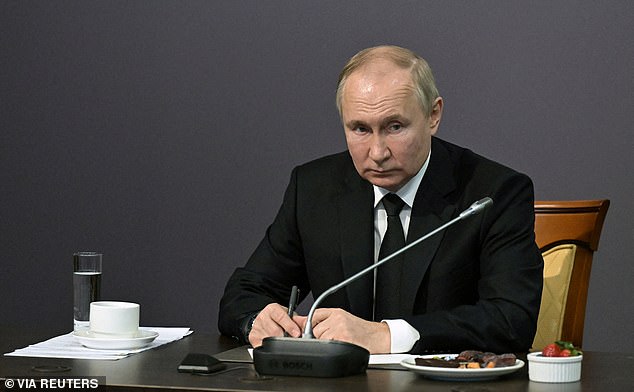 And, since Berlin holds a veto over the export of German-made weapons held by its allies, countries such as Poland and Portugal are unable to send their Leopard 2 tanks, even though they want to.

It seems German chancellor Olaf Scholz will not budge on the matter unless the US also provides Ukraine with its Abrams M1 tanks – but this is madness.

The Abrams tanks are not in Europe in sufficient numbers to have a decisive impact on the war and they guzzle vast quantities of jet fuel or diesel.

It would require an extraordinary logistical exercise to bring them over from the US and then to ensure they had sufficient specialised fuel and spare parts on the battlefield of Ukraine.

In contrast, there are 2,000 German-made Leopards in Europe and, because they run on diesel, vast numbers of them are ready to roll. Germany is simply citing the Abrams as a pretext for inaction.

The truth is that more cynical calculations lie behind Scholz’s refusal to give the go-ahead.

Of course, he has claimed that there has been a sea-change in relations with Russia after Putin’s invasion of Ukraine and rapidly managed to wean Germany off Moscow’s gas supply when war broke out. Yet Berlin still hankers to revive economic links with Russia as soon as possible.

The German economy has been rocked by Western sanctions against Russia. As an export-led economy, Germany needs cheap Russian energy and raw materials for manufacturing.

Reopening Russia’s gas spigot is seen by Scholz as key to Germany’s recovery from the devastating economic impact of the war.

And it’s not as if Scholz is facing domestic pressure to act.

Scarred by the horrors of two World Wars, Germans fear that military assistance to Ukraine risks escalation – which in the worst case would include the use of nuclear weapons by Russia.

For that reason, public opinion tends to back Scholz, with the latest poll showing that 46 per cent of Germans oppose sending Leopards to Ukraine, with 43 per cent in favour.

Scholz may also harbour a personal reluctance to send in the tanks. As a young socialist and pacifist, he was a regular at anti-Nato demonstrations in the 1980s – effectively, he was Germany’s answer to Jeremy Corbyn. And he may fear that capitulating to Nato members clamouring that tanks be sent will make him appear weak.

Though Scholz’s dithering might be working to his advantage domestically, it is cruelly costly to Ukrainians. And by trying to game the current war to ensure Germany’s long-term economic safety, he is poisoning Berlin’s relations with its partners in the EU and Nato.

Not since the end of the Second World War has Germany been such a pariah. What a bitter irony that, by refusing Ukraine his tanks, this veteran peacenik is effectively siding with Putin the aggressor.

Mark Almond is director of the Crisis Research Institute, Oxford.