Sydney’s planners suffer from a ‘total lack of sense’ and seem ‘permanently asleep at the wheel’ as the city goes through a massive population boom, Mark Latham has warned.

In an exclusive interview, the newly elected New South Wales One Nation leader has given a scathing diagnosis of the biggest problem with Australia’s largest city.

The powerful crossbencher, 58, still lives in Sydney’s south west near Camden with his wife and children and commutes to work by train.

But Mr Latham described the area as ‘population boom town’ and painted a vivid picture of schools and local services already under immense strain.

That comes even as the Government plans to build a new city the size of Adelaide on Sydney’s outskirts – without setting aside land for a single public hospital.

‘I got involved with politics because of bad planning where I grew up … and fifty years later you’re having the same problems,’ Mr Latham said.

‘You have to wonder, are these people permanently asleep at the wheel? Because these are obvious, obvious problems that come from bad planning.’ 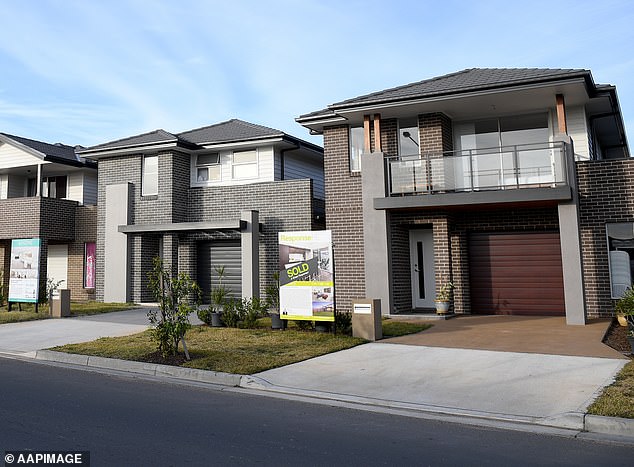 Population boom: Rows of houses in Sydney’s greater west where as many as 1.3 million will live in the shadow of the new Western Sydney Airport

‘You have to wonder, are these people permanently asleep at the wheel? Because these are obvious, obvious problems

Mr Latham’s comments echo those of former premier Bob Carr, who predicted last March that a crowded and ‘dystopian’ future Sydney would lead to popular beaches like Bondi and Manly getting turnstiles and ticketing.

However, Mr Latham’s remarks this week aren’t just based on his imagination, but what he has already seen developing on the city’s fringes. Particularly the State Government’s plan to build an ‘Aerotropolis’ near the under-construction western Sydney airport, at Badgery’s Creek.

The Government said as many as 1.3 million people could end up living in the so-called Aerotropolis. But Mr Latham complained it hasn’t even put aside a ‘patch of dirt’ for a public hospital.

PUTTING AWAY THE SLEDGEHAMMER: MARK LATHAM IN STATE PARLIAMENT

Mark Latham has a reputation for being a bomb-thrower. But in his new job, he seems to be more about controlled demolitions.

The One Nation leader said he was pleasantly surprised by how receptive the Gladys Berejiklian government’s top ministers had been to his ideas.

Mr Latham said it had been ‘refreshingly straightforward’ to argue a case and get things done with ministers.

‘In Canberra, the idea you could’ve walked into a senior minister’s office unannounced … you’d have to make an appointment for a week or catch them in the corridors.’

Mr Latham is a crucial vote for the government on its crossbench, and he begrudgingly admits it may be one of the most powerful roles he has had.

‘I think you’re better off up front trying to persuade people that something else makes sense than coming with a sledgehammer up front’.

‘Adelaide has four public hospitals and we’re building a city with none.’

Meanwhile, he said, new suburbs on the city’s south-western reaches, like Oran Park, are already struggling.

The local school, Oran Park Public, opened six years ago but already has 1500 students, double its capacity. It has a staggering 42 demountable buildings.

‘What, they think it’s going to be a retirement home, Oran Park?’ Mr Latham scoffed.

‘No, there’s young families moving in, they’re going to have kids, going to school.

‘So how do you end up with a school with 42 demountables, that even the dunnies are demountable?

Meanwhile, Mr Latham said the new train station at Leppington, completed by the previous government, had just 900 car spaces when it needed almost four times as many.

‘People are parked up side streets and around the corner in the dark. It’s a safety risk for women walking to their cars.

And while the Government is planning a driverless metro line to the new airport, Mr Latham said the plan was flawed.

That new metro would force jetsetters to have to catch three different trains if they wanted to meet a connecting flight at Sydney’s main airport. The Government’s planned driverless metro runs from the airport to St Marys station, on Sydney’s main suburban commuter line.

‘We all love St Marys, but it’s not in the tourism books,’ Mr Latham said. 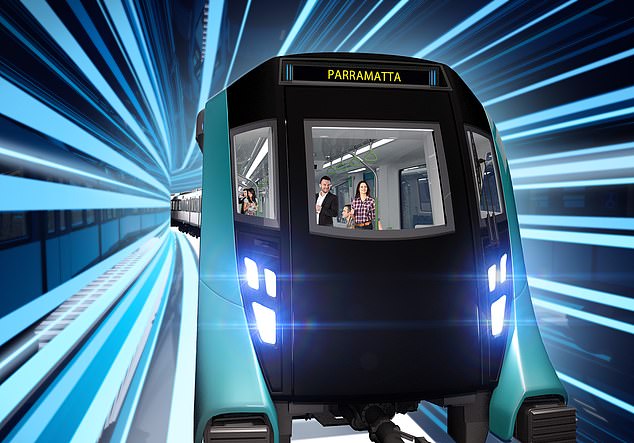 ‘Then with your big bags you’ve got to change from a metro train to a heavy rail and again to go to the airport at Mascot.’

Mr Latham said the previous Labor government had built a train line out to Leppington with an eye to extending it to the new airport.

That line already connects up with the international terminal – but the trains would have to be driven by people, not robots, like the metro.

‘So why wouldn’t you do a heavy rail? Because the Government has an aversion to heavy rail because they’ve got drivers and unions.

‘Well, you can’t plan an international airport in western Sydney around an industrial relations agenda.’

Mr Latham said he first got into politics because of ‘bad planning’ where he grew up, in Green Valley, then on the city’s western fringes.

‘This can’t be bad luck that (there’s) a school like Oran Park, a train station like Leppington, an invisible hospital at the Aerotropolis and the rail link via St Marys’. 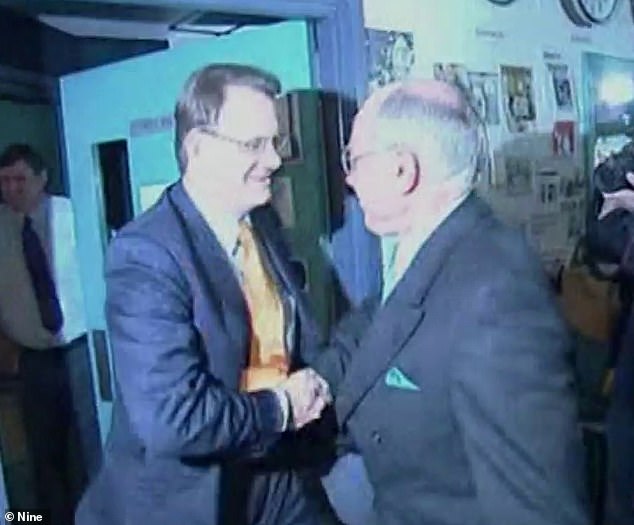 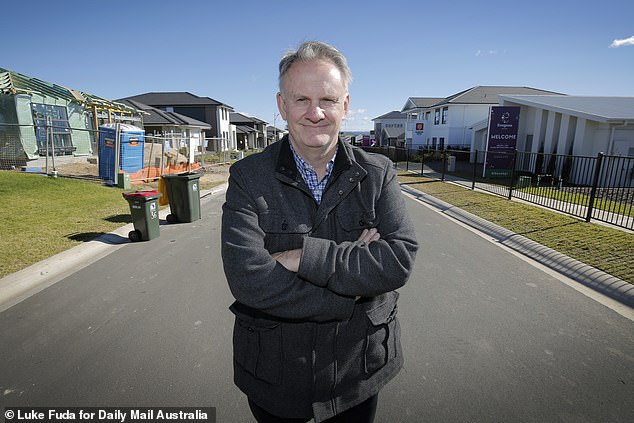 Despite his comprehensive list of issues with Sydney’s planning, Mr Latham said he was otherwise settling in well to his new role as a NSW Upper House powerbroker.

Gladys Berejiklian’s government doesn’t have a majority in the chamber and Mr Latham and his One Nation colleague Rod Roberts, a former detective, have immense power in allowing – or blocking – legislation.

State politics wags have said Mr Latham’s arrival in the chamber has been like a ‘first grader’ playing against the ‘reserve grade’ state politicians. But Mr Latham said Ms Berejiklian’s Coalition has managed to nurture their talent pool over the past three terms in government.

‘I think the Berejiklian government has half a dozen ministers that would fit onto a federal front bench – they’re quite talented and know their stuff.

‘I think Labor’s got a bigger problem with talent … they’re struggling to get a couple of openers out.’

Nevertheless, despite a convincing election victory, it’s not all rosy for the state government.

‘Sydney’s growing so quickly and while they’re cutting ribbons and opening some road and rail it doesn’t keep up with population growth,’ Mr Latham said.

‘So after a while, people just out of frustration (could) vote for the other mob’.

Contacted for comment, a spokesman for planning minister Rob Stokes said: ‘Mr Latham is right when he points out the NSW Government isn’t just building an airport but a contemporary metropolitan city that will become known as the Western Parklands City.’

‘That’s why we’re planning strategically to ensure the Western Parklands City is supported by essential services and infrastructure including healthcare, education, public transport, and open space.’

Mark Latham once lost his gig as a newspaper columnist because of his tweets – but he’s still as ruthless and prolific as ever on social media.

However, the One Nation NSW leader does have one social media rule he sticks to: He never tweets from his mobile phone.

‘The danger with the phone is if I look at some idiot having a go at me, I can fire back in a way that might be, even by my standards, inappropriate.

Instead, the politician said told Daily Mail Australia he only fires off his Twitter broadsides ‘on my home computer.’

‘I’ll have a burst on issues. This week I would have tweeted a bit on the Uluru statement (from the Heart) and that.

‘So as these virtue signalling issues come up I try and put some reality into it.’

He said the media has changed and Twitter was ‘the left wing forum where you’ve got to get stuck into them and have a go.

‘Some people back away from that, drop out of Twitter, they think it’s too punishing.

‘I’m sort of at a point where there’s not too many things that hurt my feelings’.