Mark Zuckerberg is hiding out at his sprawling $100million estate in Hawaii amid mounting turmoil at Facebook as a growing list of prominent brands are boycotting the social media network over its perceived failure to crack down on hate speech and incitements to violence.

The Facebook founder – who recently became the fourth-richest person in the world as his net worth rose to a staggering $86.5billion – was photographed on a Kauai beach with wife Priscilla Chan, their toddler daughters Max and August, and several family friends on Monday.

It’s unclear when the Zuckerbergs arrived on the island’s north shore, where they began snapping up 700 acres of land in 2014.

The massive property is an ideal setting to ride out the coronavirus pandemic gripping the nation as it offers both seclusion and stunning views while Zuckerberg and all of his staff work from home for the foreseeable future.

Meanwhile chaos is erupting at Facebook’s headquarters in Silicon Valley as a number of brands including Ben and Jerry’s, Patagonia and REI have stopped advertising on the site after the NAACP called for a boycott and accused Facebook of promoting ‘bigotry and violence’.

Mark Zuckerberg was photographed hitting the waves in Hawaii with his wife Priscilla Chan and their daughters on Monday. The sighting came amid mounting turmoil at Facebook as a growing list of prominent brands are boycotting the social media network over its perceived failure to crack down on hate speech and incitements to violence 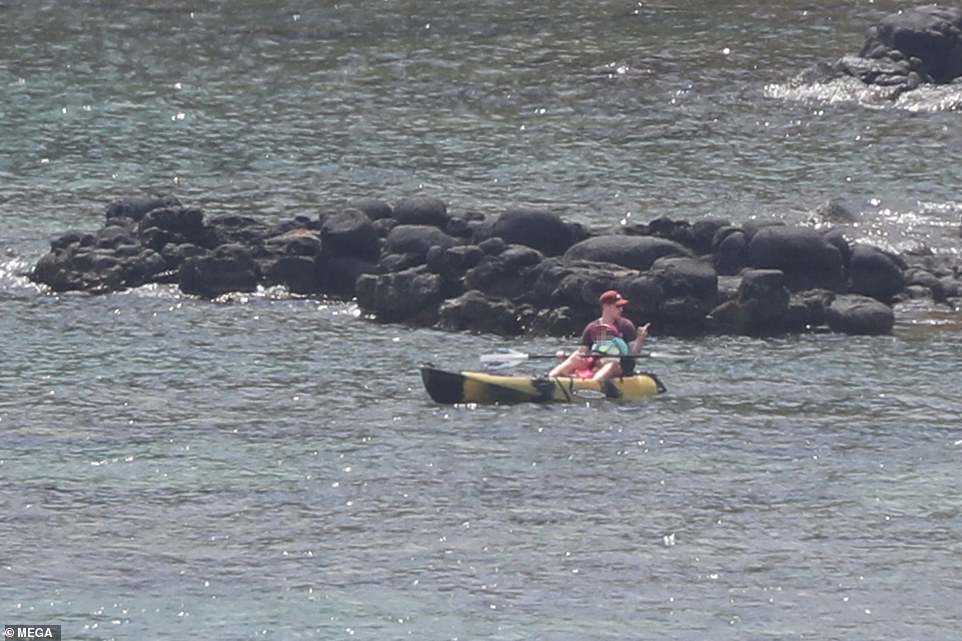 Zuckerberg, 36, is seen kayaking with one of his daughters in his lap on the north shore of Kauai, where the family owns a $100million, 700-acre property 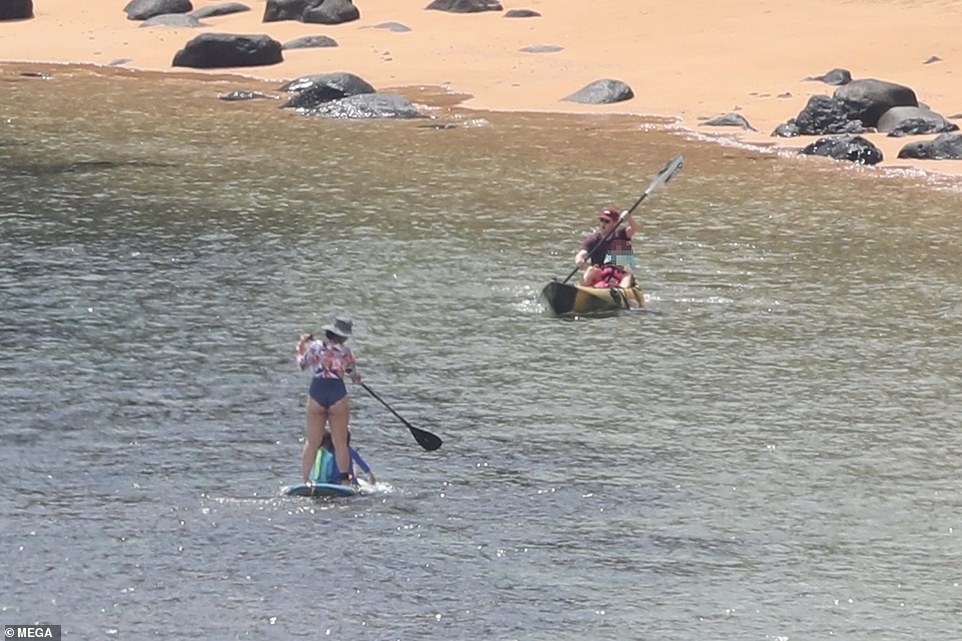 It’s unclear when the Zuckerbergs arrived on Kauai, where they’re holing up amid the coronavirus pandemic 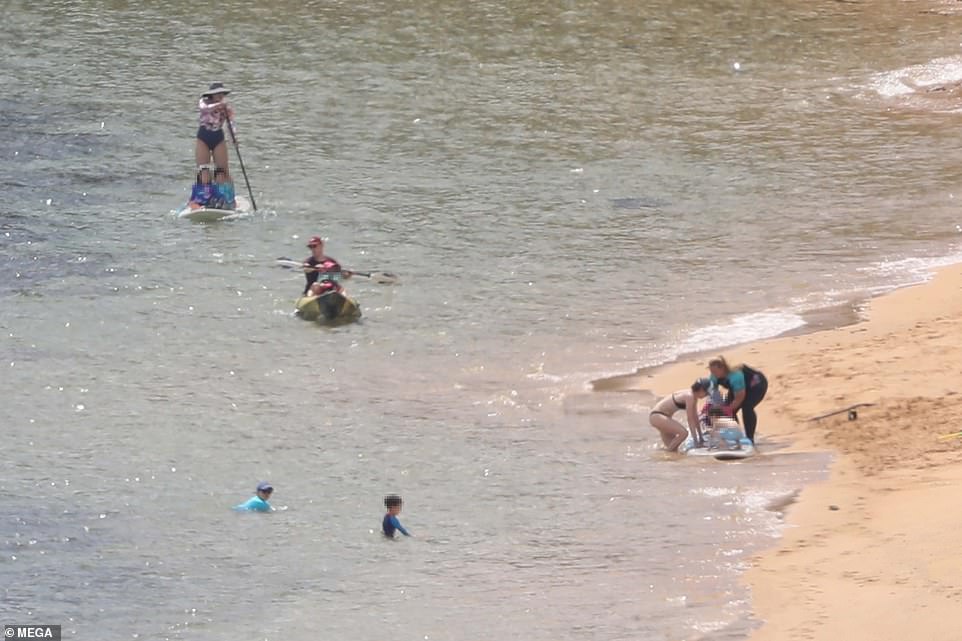 Zuckerberg appeared unfazed by the drama surrounding Facebook as he hit the waves with his family on Monday.

The 36-year-old – whose net worth has reportedly grown by $30.1billion during the pandemic, according to a Forbes profile published earlier this month – was seen floating just off the coast in a kayak with Max, four, and August, two, while his wife paddleboarded nearby. 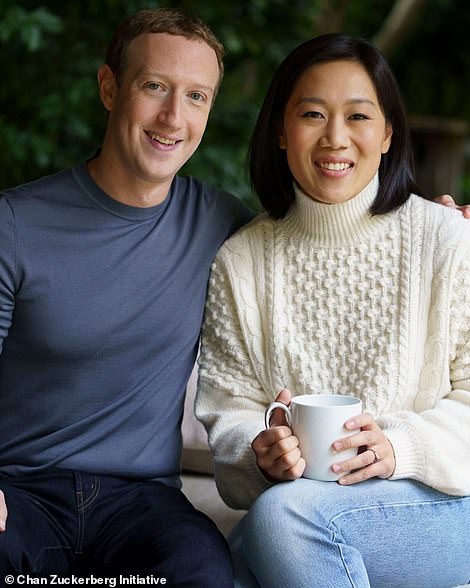 The family appeared to be joined by another couple with three young children and an unidentified blonde woman who helped Zuckerberg lug his kayak back onto the sand before they packed up to return to their luxury home.

Zuckerberg’s property is bordered by three beaches with about 2,500 feet of coastline. While all three are public, they are very difficult to reach as they sit below a steep slope that’s dense with local flora and fauna.

The CEO shared photos of the property on Facebook on Christmas Day in 2016 and said he and his wife ‘fell in love with the community and the cloudy green mountains … and eventually decided to plant roots and join the community ourselves’.

Two days later, his lawyers filed a slew of lawsuits against hundreds of Hawaiians who may own an interest in small parcels of land within the boundaries of his estate.

The parcels originally belonged to Native Hawaiians who were given the land when private property was established in Hawaii in the mid-19th century. Many of the landowners died without making wills, and it was never determined who inherited the land.

Zuckerberg’s lawsuits drew fierce backlash from locals who called him ‘the face of neocolonialism’. The billionaire backed down from the legal battles weeks later – but it’s believed he remains a controversial figure on Kauai.

He sought to improve his local reputation in April when he and Priscilla donated $1million from their foundation to help fight coronavirus on the island. 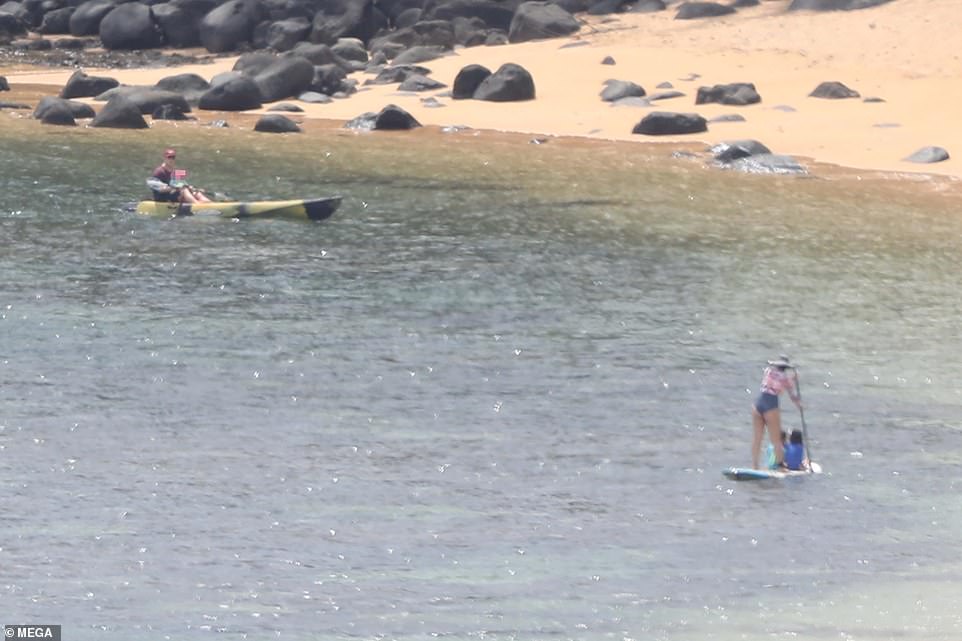 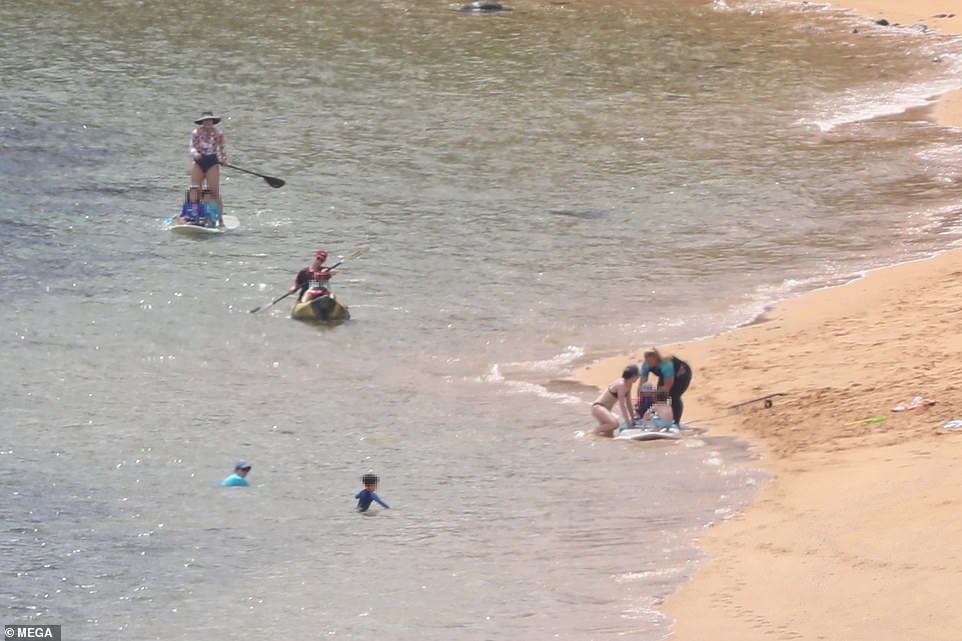 The crew donned hats and sunglasses to keep a low profile on the beach, which is public but difficult to access by land 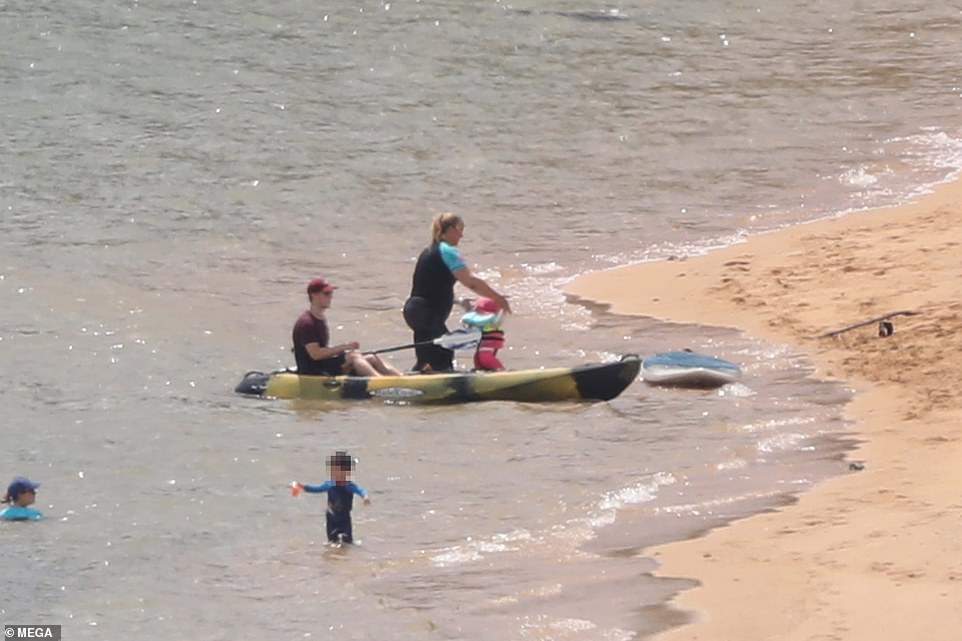 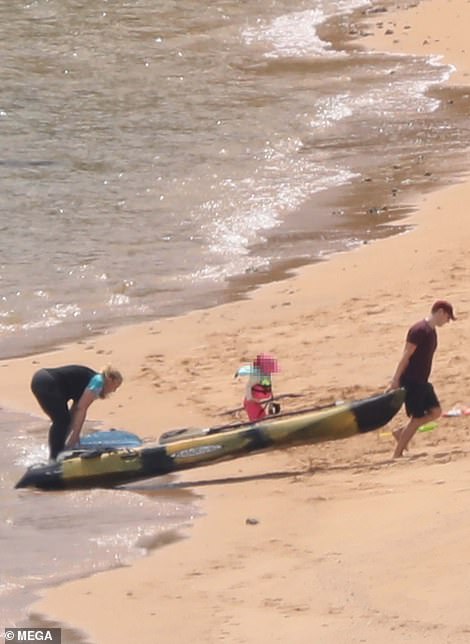 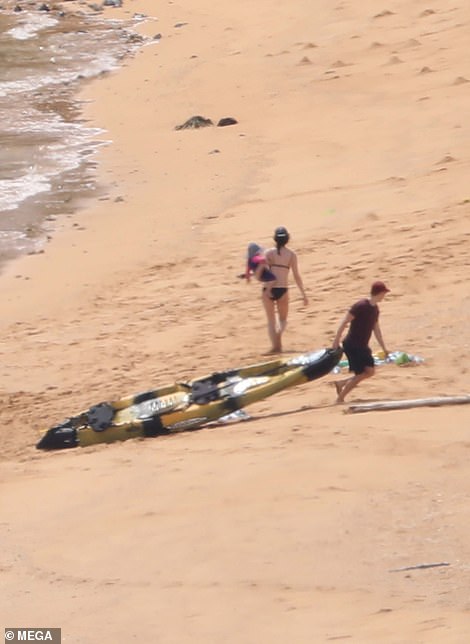 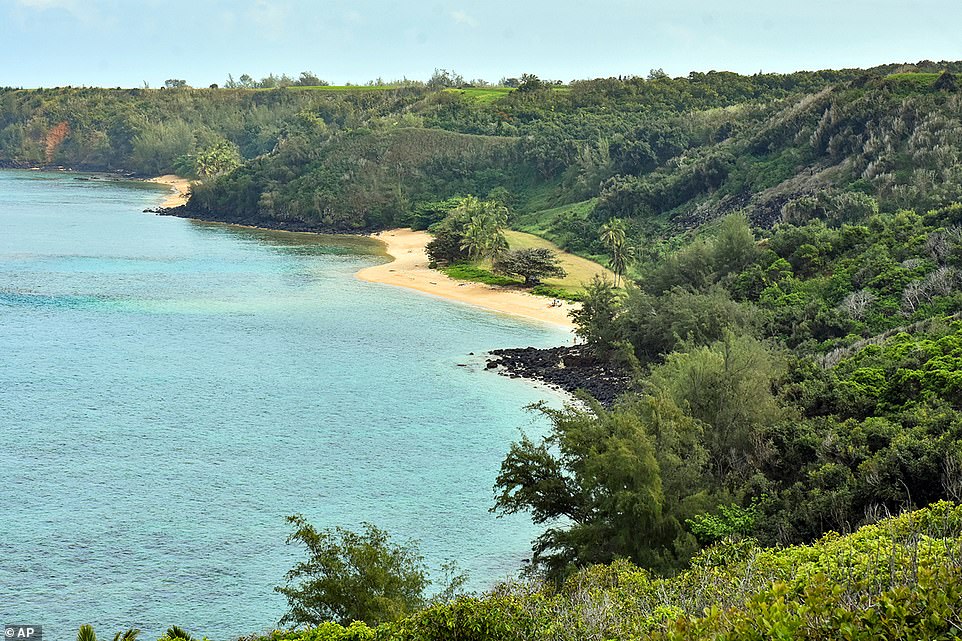 Zuckerberg’s beach day came to light just as his company was targeted by ‘Stop the Hate for Profit’, an initiative  supported by the Anti-Defamation League (ADL), the National Association for the Advancement of Colored People (NAACP) and other groups.

Ice cream giant Ben & Jerry’s joined the initiative on Tuesday, writing in a statement: ‘As of July 1st we will pause all paid advertising on Facebook and Instagram in the United States.

‘We call on Facebook, Inc. to take the clear and unequivocal actions called for by the campaign to stop its platform from being used to spread and amplify racism and hate.’

Color of Change joined forces with a number of other civil rights group to launch the ‘#StopHateforProfit’ campaign earlier this week, encouraging companies to pull ads from Facebook. Last week the campaign took out the full page ad above in the Los Angeles Times

The #StopHateForProfit campaign comes as Facebook faces growing pressure over its hands-off approach to misinformation and inflammatory posts, including from President Donald Trump.

The social media company made an estimated $70billion annually from ads, the coalition claimed in a statement on the ADL website.

The campaign has criticized Zuckerberg’s decision to not moderate the president, after the CEO again defended his decision not to limit Trump’s often controversial, incendiary and inaccurate posts.

Twitter’s decision in May to hide one of Trump’s tweets for ‘glorifying violence’ exposed turmoil at Facebook, with employees rebelling against Zuckerberg’s refusal to sanction false or inflammatory posts by the president.

The activists called on Facebook to crack down harder on Trump and his campaign as the November election looms.

‘It is clear that Facebook and its CEO, Mark Zuckerberg, are no longer simply negligent, but in fact, complacent in the spread of misinformation, despite the irreversible damage to our democracy,’ the NAACP said in a tweet.

The coalition criticized Zuckerberg’s decision late last month to leave up a particularly inflammatory Trump post, which stated in part: ‘When the looting starts, the shooting starts’. Twitter hid the same message behind a warning that said the post ‘incited violence’.

The Facebook co-founder then held a conference call with civil rights leaders who condemned him for failing to remove the post.

In a subsequent statement, Rashad Robinson of Color of Change, Vanita Gupta of the Leadership Conference and Sherrilyn Ifill of LDF said: ‘He [Zuckerberg] did not demonstrate understanding of historic or modern-day voter suppression and he refuses to acknowledge how Facebook is facilitating Trump’s call for violence against protesters. Mark is setting a very dangerous precedent for other voices who would say similar harmful things on Facebook.’ 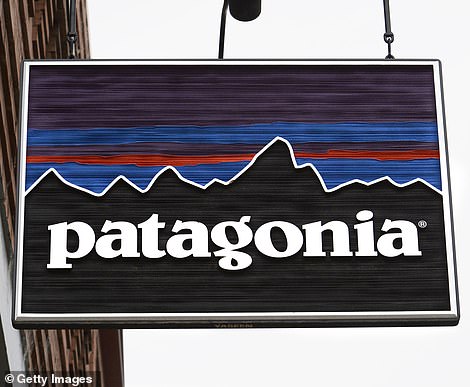 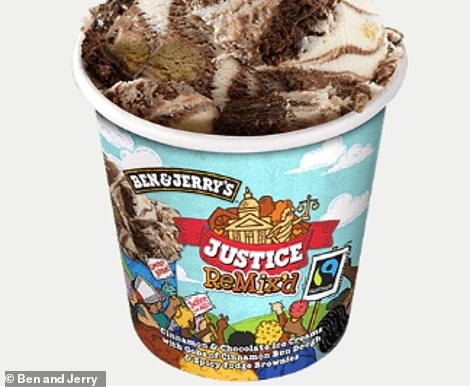 Patagonia announced that it is pulling ads from Facebook on Sunday. Ben & Jerry’s followed suit  on Wednesday

Color of Change subsequently joined forces with a number of other civil rights group to launch the ‘#StopHateforProfit’ campaign earlier this week, encouraging companies to pull ads from Facebook.

Other organizations in the campaign include the Anti-Defamation League, the NAACP, Sleeping Giants, Free Press and Common Sense.

Last week, the campaign took out a full page ad in the Los Angeles Times pushing for companies to boycott Facebook. The social media giant reportedly made close to $70 billion in ad revenues last year.

‘What would you do with $70billion?’ the #StopHateForProfit ad asks.

‘We know what Facebook did. They allowed incitement to violence against protesters fighting for racial justice in America in the wake of George Floyd, Breonna Taylor, Tony McDade, Ahmaud Arbery, Rayshard Brooks and so many others’.

The ad goes on to accuse Facebook of ‘turning a blind eye to voter suppression’ and ‘amplifying white supremacists’.