The AA skidded into the red after two potential suitors pulled out of the race to buy the breakdown group.

The debt-laden company revealed in August it had been approached by three potential bidders to take it private – much to the market’s delight.

Private equity groups Platinum Equity, Warburg Pincus, and Towerbrook Capital Partners working with the European arm of Centerbridge Partners were all circling the company, it said.

Non-runner: Private equity groups Platinum Equity and Centerbridge Partners have pulled out of the race to buy debt-laden breakdown company the AA

But the talks stalled and a deadline at the start of this month was extended to September 29.

With just days to go, Platinum Equity and Centerbridge have withdrawn. Platinum said it was by ‘mutual agreement’, though it has reserved its right to return to the negotiating table under certain conditions.

Centerbridge said that Towerbridge, previously its partner in a joint bid, was still mulling a separate approach.

The AA had been on sounder footing at the start of this year, stemming a long-running customer exodus to cheaper rivals.

It is banking on customers wanting to pay more for a tech-savvy service that can diagnose problems, predict breakdowns and tell patrols where a car is when trouble strikes. 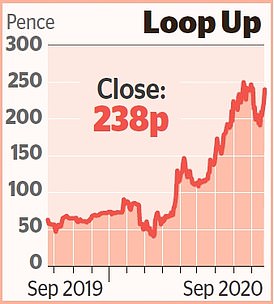 The rapid shift to home working sent revenues at conference call service provider Loop Up 43 per cent higher to £32million in the first half.

Its services were used for 617million minutes – up 58 per cent on the same period last year – and held 3,596 virtual events.

Customers, who include Travelex and Planet Hollywood, can also now make calls via Microsoft Teams.

This wouldn’t be its first brush with private equity, with it being privately controlled by CVC Capital Partners and Permira before it refloated on the stock market back in 2014.

But whether it is about to be brought back into the private equity stable remains to be seen. Shares fell 17.1 per cent, or 5.8p, to 28.2p. Both of the London Stock Exchange’s major indexes rose by more than 1 per cent.

The mid-cap index saw some of the day’s biggest rallies.

Upper Crust-owner SSP Group surged 12.3 per cent, or 22.3p, to 203p as investors took solace in a set of figures that were not as bad as they had expected.

Current weekly sales are 76 per cent below last year, an improvement from drops of 95 per cent in April and May.

And its business in continental Europe has been performing better – sales are down 66 per cent there. The fact it has outlets in 30 countries will help it recover.

But SSP was outdone by Diploma, which yesterday advanced by an astonishing 26.9 per cent, or 461p, to 2172p after it raised £194million to help it take over a US wire and cable distributor.

Diploma is paying £357million for Windy City Wire Cable & Technology Products, which it hopes will help it to gain a bigger foothold in the US.

Embattled cinema chain Cineworld was also close to the top of the mid-cap leaderboard, up 9.9 per cent, or 4.37p, to 48.52p ahead of half-year results out today.

Over on AIM, recruiter Staffline (up 8.2 per cent, or 2.03p, to 26.7p) appointed non-executive director Albert Ellis to be chief executive from October 1.

It said there was an ‘unprecedented surge’ in demand for staff in supermarkets and elsewhere in the supply chain during lockdown. But its loss has widened from £12.3million in the first six months of 2019 to £47.7million.

And the children’s live events and entertainment group Live Company advanced 6.3 per cent, or 0.5p, to 8.5p, after it signed a deal with the White Rose shopping centre in Leeds to showcase a themed trail of Paddington bear models, which are made out of Lego bricks, over Christmas.