In a bid to halt the spread of new and possibly more dangerous Covid variants, UK residents returning from 33 ‘red list’ countries will have to stump up £1,750 to quarantine in a Government-sanctioned hotel for ten days.

In a further move, people travelling back to the UK will also have to pay for three coronavirus tests, potentially costing another £360.

Covid crackdown: UK residents returning from 33 ‘red list’ countries will have to stump up £1,750 to quarantine in a Government-sanctioned hotel for ten days

Needless to say, the rules will almost certainly put paid to non-essential travel for at least the next few weeks.

Airline and other travel businesses had been desperately hoping that the rollout of vaccines might prompt a trickle of holidaymakers to go abroad this spring, building up to a better summer. 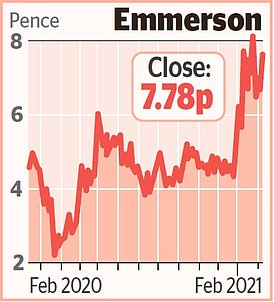 Equipped with the licence, it is on track to start developing the site this year.

It has had a lot of interest from agriculture groups on both sides of the Atlantic.

Emmerson hopes the mine will produce 800,000 tons of potash a year, adding another 1 per cent to Morocco’s national tax revenue.

In addition to the expensive quarantine requirements, the stakes have also been raised by plans to fine anyone found not to be complying with the ten-day quarantine up to £10,000 – or even face a decade in prison.

A jump in housebuilder shares helped keep the indexes in the black after Bellway said that it had built a record number of homes and posted first-half turnover of £1.7billion.

Micro Focus specialises in wringing profit out of old computer systems it acquires by selling software and maintenance services to banks and retailers which use them.

After a difficult few months, investors piled in after it reinstated a final dividend – of 15.5p per share – as it made ‘solid progress’ in its three-year turnaround plan.

There was muted demand for security giant G4S after it said business had been buoyant in the final months of 2020, pinning down contracts with a value of £5.5billion.

G4S is a bid target for US rival Allied Universal and Canada’s Garda World. The board has backed a 245p a share offer from Allied having snubbed Garda.

But there is chatter that Garda could be mulling another bid, which is why some in the City believe G4S’s shares are above the asking price.

They closed up 0.2 per cent, or 0.4p, to 261p before Allied Universal said the offer had been extended again to 1pm on March 6.

It has so far shored up support from investors representing 0.9 per cent of the company’s shares.

And, finally, medicinal cannabis company MGC Pharmaceuticals had a rollicking first day on the stock market, rising from a starting price of 2p to 2.4p, a 19 per cent rise.