Arrow Global shares shot up after its private equity suitor made an official takeover offer.

The debt collection group has recommended investors back the £560million deal from TDR Capital, which would hand them each 307.5p per share.

TDR has proven persistence is key after it spent months putting forward bid proposals, each slightly higher than the last.

Debt collection group Arrow Global has recommended investors back the £560m deal from TDR Capital, which would hand them each 307.5p per share

It floated the 307.5p price several weeks ago – at which time Arrow said it would be minded to accept it if TDR made a binding offer.

Manchester-based Arrow Global specialises in buying defaulted customer accounts from retail banks and credit card companies – and has suffered during the Covid crisis as more people than usual have been unable to pay back their debts.

The deal is one of TDR’s first big moves after it helped EG Group’s Zuber and Mohsin Issa launch a £6.8billion takeover of Asda from American supermarket behemoth Walmart.

Arrow Global’s founder and chief investment officer, Zachary Lewy, is in line to net more than £11million from the deal through his 2 per cent stake if it completes. 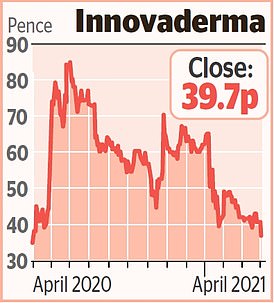 Britons will want to slather themselves in fake tan once lockdown lifts over the spring and summer and they begin socialising again, according to Innovaderma.

The beauty group – whose products include Skinny Tan – is preparing for a surge in sales.

But shares dropped 2 per cent, or 0.8p, to 39.7p as it revealed losses widened from £348,000 to £1.2million in the six months to December – and admitted the uncertainty around Covid made it difficult to say how quickly it would rebound.

Shareholders clearly believe it will – with shares rising 5.9 per cent, or 17p, to 305p last night, slightly short of the offer price.

Dignity’s stock surged after its largest investor went into more detail about why it is trying to unseat the company’s executive chairman.

The funeral provider’s shares slumped earlier this week when it became public that Phoenix Asset Management was looking to remove Clive Whiley.

But Phoenix yesterday said it wanted to oust Whiley and install one of its own directors to lead the company because it can ‘no longer trust him’ after the way he dealt with ‘some very serious issues’ it discovered in part of the business.

In an open letter, the asset manager claimed it went to Whiley with the concerns but his ‘subsequent actions’ – which it can’t spell out because of a confidentiality agreement – left it with no choice but to remove him.

Phoenix also apologised to investors, because in the company’s words it was ‘instrumental’ in getting Whiley appointed in the first place. Shares in the undertaker rose 6.3 per cent, or 39p, to 660p, as the board battle continued.

Brent crude was trading below $64 a barrel after cartel Opec+ lowered its forecasts for oil demand in 2021. The spread of different Covid variations and a wave of new lockdowns have dented demand for oil already.

Topps Tiles received a muted response – climbing 0.3 per cent, or 0.2p, to 69.2p – after it said it expected a ‘sharp’ rise in sales when its stores can reopen.

Topps was stung during the most recent lockdown, when it could only provide click and collect services, with revenues falling from £106million to £104million in the six months to March 27.

Before the latest Covid restrictions it had a strong first quarter, boosted by the DIY and home improvement trend that started at the beginning of the pandemic.

It will be able to reopen its more than 300 UK stores from April 12.

The warehouses and trucking group has benefited from the boom in online shopping over the last year as people were forced to stay at home and buy their groceries on the internet.