Centrica shares soared after it cashed in on sky-high gas prices.

The British Gas owner said it now expects profits for the year ‘to be towards the top end’ of City expectations. The FTSE 100 giant also launched a £250million share buyback programme to return cash to investors.

The prospect of bumper profits and a hand out to shareholders sparked a fresh row over windfall taxes ahead of next week’s Budget.

Centrica said it expects profits ‘to be towards the top end’ of expectations. The FTSE 100 giant also launched a £250m share buyback programme

Chancellor Jeremy Hunt looks set to raise the levy on energy companies as he seeks to plug a hole in the nation’s creaking finances.

But while politicians squabbled over taxes, the update cheered the City, with shares rising 7.4 per cent, or 5.72p, to 83.3p.

Like Centrica, National Grid increased its profit forecast following a strong period of trading, sending its shares up 3.2 per cent, or 31.4p, to 1018p.

The upgrade came as the company – which operates the electricity network – said profits rose 45 per cent to £1.6billion in the six months to September.

On the wider markets, lower than expected inflation in the US fuelled hopes that the Federal Reserve, led by chairman Jerome Powell, may begin to slow the pace of interest rate hikes.

On Wall Street, the Dow Jones Industrial Average added 2.5 per cent, the S&P 500 shot up 4.1 per cent and the technology-heavy Nasdaq rose 2.4 per cent. 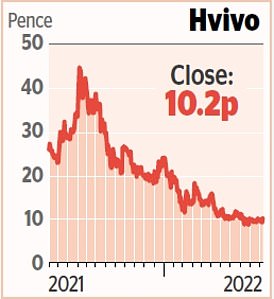 RSV is a leading cause of pneumonia in toddlers and the elderly.

The trial is expected to start towards the end of next year, with revenue to come in 2023 and 2024.

‘Jerome Powell and equity markets will breathe a sigh of relief that inflation is finally moving downwards and coming in below expectations,’ said Mike Bell, global market strategist at JP Morgan Asset Management. ‘This gives the Fed room to slow the pace of their rate hikes.’

Back in London, ConvaTec hiked its revenue growth target for the year on the back of rising sales.

The medical devices company saw sales rise by 2.4 per cent in the ten months to October.

Auto Trader shares gained 3.1 per cent, or 17p, to 571p despite reporting that a business it bought in June is expected to make a loss this year.

The online car seller said Autorama is expected to report an £11million loss for the year amid falling delivery volumes caused by ongoing supply constraints.

Auto Trader said revenue increases 11 per cent to £238.2million in the six months to September.

This was above the £233million consensus among analysts.

Tate & Lyle received a boost after the ingredients maker said its customers were looking for healthier food.

The group said there was ‘robust’ demand for products that lowered sugar, calories and fat, and added fibre.

Grafton shares soared 11.5 per cent, or 83.9p, to 810.8p after a strong showing in Ireland, the Netherlands and Finland made up for a weaker performance in the UK where consumers cut back on home improvements.

Total revenues at the company, which owns building materials supplier Selco, rose 9.5 per cent to £1.9billion in the ten months to October.

The science and engineering group said revenue rose 12 per cent to £673.4million in the six months to September. Profit more than doubled to £104.5million.