MARKET REPORT: Computacenter rallies to record high after demand for its products and services soared under lockdown

The vital importance of Britain’s usually reclusive IT geeks during the Covid crisis has been underlined once again by Computacenter.

Shares in the FTSE 250-listed group rose to a record after it said demand for its products and services was so high in July and August that its annual results will be even better than expected.

The almost overnight switch to working from home when lockdown started in March was a boon for business.

Tech boom: Shares in Computacenter rose to a record after it said demand for its products and services was so high in July and August that annual results will be even better than expected

Some of this was from companies scrambling to buy staff IT equipment for setting up home offices, while its remote support and cyber-security services also became a lifeline for remote workers.

The group – whose diverse array of customers include the Post Office, Channel 4, Costa Coffee and the Scottish National Party – had already said in July that profits in the first half would be ‘substantially ahead’ of the same period of last year.

And in a short-but-sweet surprise trading update, it said full-year profits would be ‘materially above the board’s expectations’. With the slow return to office working in big cities, it could do even better yet. 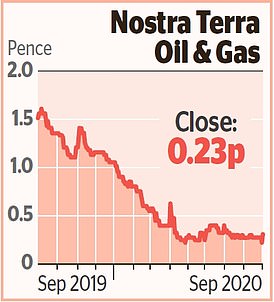 Nostra Terra Oil & Gas shot higher by as much as 38 per cent after it spent £318,000 buying an oil field in Texas that is already pumping out the black stuff – but the stock eventually fell back and closed flat at the end of trading.

Junior market-listed Nostra Terra will be producing 25 per cent more oil when the deal with Oro Resources and Oro East Texas completes.

It also issued new shares – but these will not dilute the value of its share price.

Bucking the general trend on the stock market, Computacenter’s shares have increased in value for the year to date.

Speaking of IT, car dealer Pendragon is going to invest more in its digital platforms – both for customers and behind the scenes for dealers.

It said that although ‘there will always be a major role for bricks and mortar in vehicle purchasing’, it is worth improving its digital systems because people are still less keen to visit showrooms and this is probably going to be a long-term trend. Investors welcomed the news and shares rose 1.7 per cent, or 0.14p, to 8.14p.

Delivery group Domino’s Pizza was also in traders’ good books – up 3.9 per cent, or 13p, to 347p – after it announced a clutch of board changes that will bring two women on to its all-male board.

The company had been without a woman on its board since June.

The appointments now leave just one company on the FTSE 350, struggling car maker Aston Martin (down 2.8 per cent, or 1.55p, to 54p), with an all-male board.

Smith replaced David Bauernfeind, who died in December in a snorkelling accident while on holiday with his family in Mauritius.

In other board-related news, Ted Baker rebounded strongly (rising 12.6 per cent, or 13.2p, to 117.7p) from a drop on Tuesday, when it revealed former boss Ray Kelvin would have a representative on the company’s board.

Investors seem to have warmed to the news that Kelvin will have more influence on the company. He left following allegations he had inappropriately hugged other members of staff, which he denies.

Domestos maker Unilever also got a round of applause as it pledged to drop fossil fuels from its cleaning products by 2030, in a push that will cost it £890million.

Its stock rose 2.4 per cent, or 107p, to 4533p, as it said it would replace petrochemicals with ingredients made from marine sources such as algae and plants.