Relieved investors sent construction contractor Costain higher after it drew a line under a problematic project.

The company has reached a final settlement with the Welsh government after a dispute about a road that winds through the Brecon Beacons, which Costain began work on back in 2015.

The two sides had been arguing about who should foot the bill for a large wall put up as part of rebuilding the A465.

Last year an arbitrator ruled the responsibility and extra costs associated with the retaining wall, which hadn’t been budgeted for and was part of the reason the project came in late and over budget, lay with the company.

Costain said the amount it has agreed is in line with the £45million it had put aside for the payment.

The final work is expected to be finished in September, leaving it free to focus on other work such as HS2 and the construction of London’s new supersewer, the Thames Tideway Tunnel. 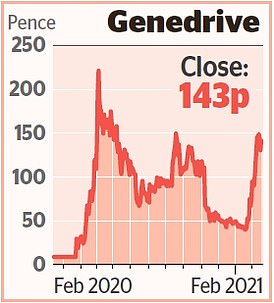 Diagnostics minnow Genedrive rallied after it sent the first shipments of its Covid tests to the US.

Manchester-based Genedrive has developed a PCR – polymerase chain reaction – test that delivers a quick result without needing to be sent to a lab.

It has a distribution agreement with Beckman Coulter Life Sciences, which will now focus on selling the kits in the US.

Like all trading platforms, business boomed in 2020 as retail investors flocked to its site and tried to make a quick buck on turbulent markets during the Covid crisis.

There were 82m customer trades placed last year – up from 35m in 2019 – in what it described as ‘unprecedented levels of platform usage’.

Whether this will happen again in 2021 is less certain now that markets are broadly recovering as vaccinations are rolled out.

Nevertheless, bumper quarter after bumper quarter in 2020 led to a 175pc increase in full-year profits to £380million, as turnover rose by £629million.

But the same could not be said for fellow investing platform Hargreaves Lansdown, which was the biggest faller on the FTSE 100 as the City digested founder Peter Hargreaves’ latest giant share sale.

Self-made billionaire and Brexit-backer Hargreaves revealed on Tuesday he had cashed in a £300million stake, or around a sixth of his holding.

On the mid-cap index, interdealer broker TP Icap completed a £310million rights issue to fund its takeover of US group Liquidnet, which will catapult it into the share trading market.

Elsewhere, TI Fluid Systems was shaken by the news that long-time boss William Kozyra will step down as president and chief executive towards the end of the year.

His successor Hans Dieltjens will kick off the transition period by joining next month as chief operating officer.

Mattress maker Eve Sleep’s market value soared after it unveiled a partnership with CBD (cannabidiol, an active ingredient in cannabis) group Sana Lifestyle to produce a range of oil drops that can help people relax.